In order to be able to accurately interpret fetal cardiac imaging by ultrasound, a full understanding of fetal cardiac anatomy is required (1, 2). The heart is a complex anatomic organ, and when imaged in the fetus, is of such a small size that makes interpretation of normal and abnormal anatomy challenging. Furthermore, the fetal ribs often shadow the fetal heart, especially later in gestation, and optimal imaging of the fetal heart is dependent on the fetal gestational age and the position of the fetus in the uterine cavity. In this chapter, we describe the fetal cardiac anatomy in detail and use anatomic specimen, drawings, and ultrasound images to illustrate various points. We owe a debt of gratitude to Drs. Anna Klassen (Orenburg, Russia) and Cornelia Tennstedt-Schenk (Mühlhausen, Germany), who kindly provided the anatomic specimens shown in this chapter. Figures were digitally altered to highlight various regions of interest.

The heart occupies the central portion of the thoracic cavity in the middle mediastinum. It is bordered anteriorly by the lower two-thirds of the sternum and the costal cartilage of the second through the sixth thoracic ribs (1). The heart is bordered by the lungs laterally and posteriorly and by the diaphragm inferiorly (1) (Fig. 5.1). One-third of the heart is located in the right chest and two-thirds in the left chest when the chest is bisected along the midsagittal plane (2).

The right and left lungs fill the majority of the thoracic cavity, with the heart occupying the central portion. The right lung is composed of three lobes—superior, middle, and inferior—with a short eparterial main bronchus. The left lung is composed of two lobes—superior and inferior—with a long hyparterial main bronchus. Each lung lobe is further subdivided into lobules and is supplied by a secondary bronchus. Tertiary bronchi supply various segments within each lobe. Individual lung lobes are not seen on ultrasound unless in association with pleural effusion.

The thymus gland is located in the anterior upper mediastinum, bordered by the sternum anteriorly and the great vessels posteriorly (Fig. 5.1). 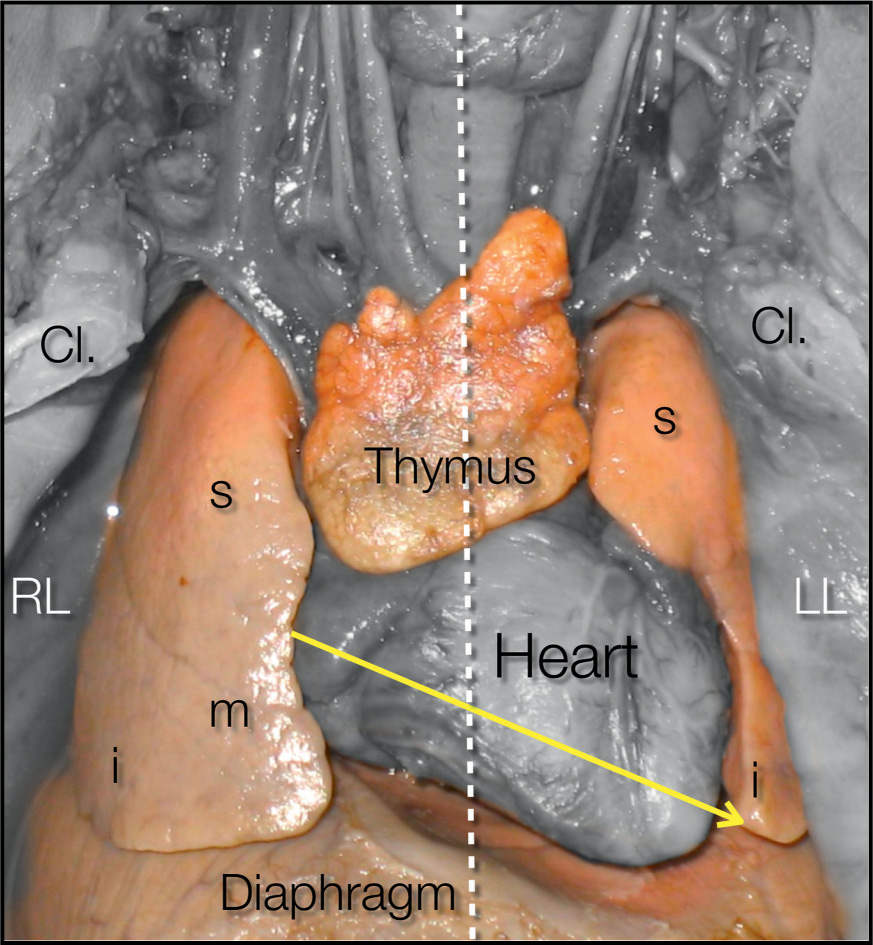 Figure 5.1: Anatomic specimen of the fetal thorax viewed from the front following removal of the sternum and ribs. A vertical line (dashed line) is drawn through the middle of the thorax dividing it into two equal halves. Note the location of the heart in the middle mediastinum with its largest portion located in the left hemithorax. The cardiac axis (yellow arrow) points to the left side. The right lung (RL), left lung (LL), and diaphragm surround the heart. The lung lobes, superior (s), middle (m), and inferior (i) on the right and superior (s) and inferior (i) on the left, are labeled. The thymus gland is seen anterior to the heart. Cl, clavicle. 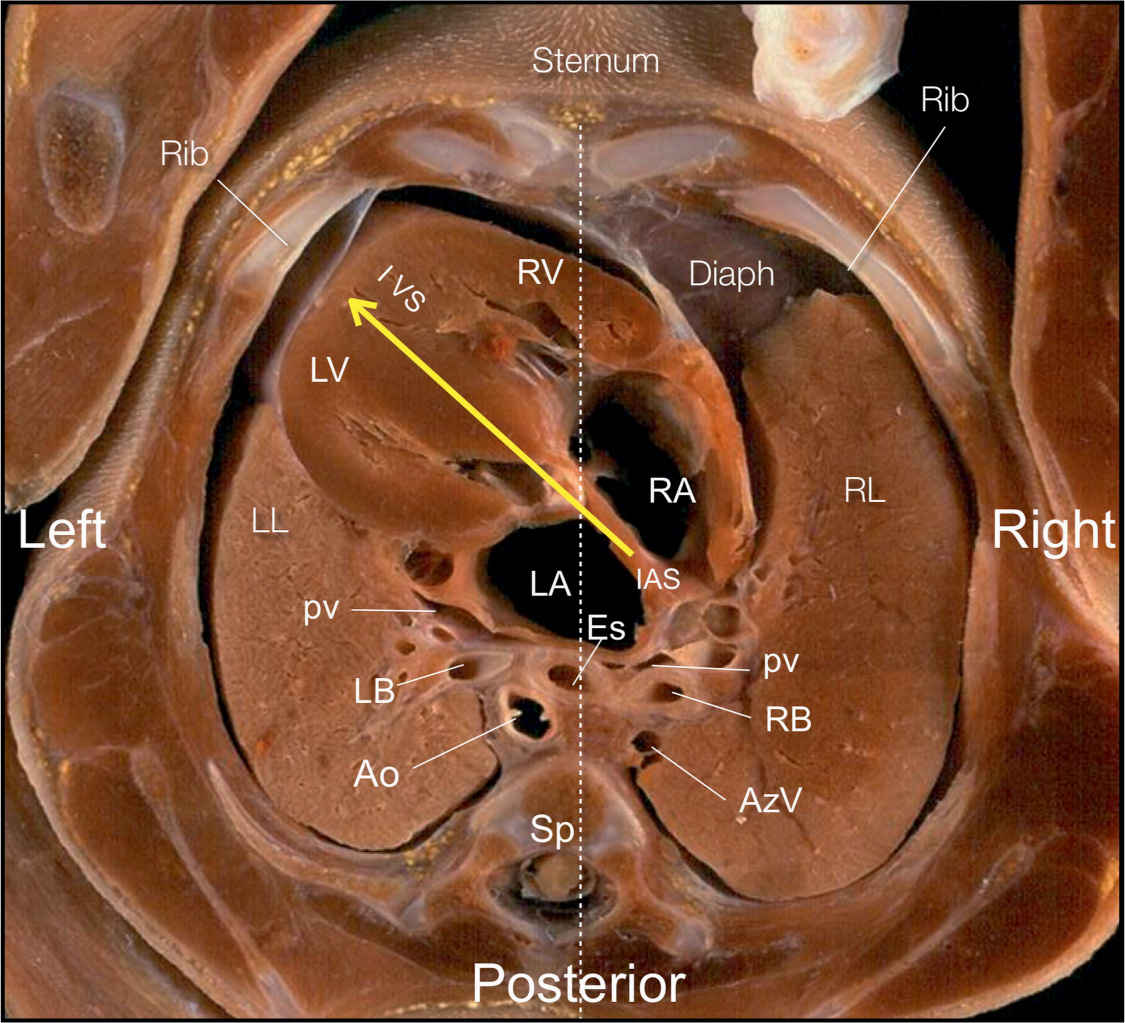 Figure 5.2: Anatomic specimen of a cross section of the fetal thorax at the level of the four-chamber view, showing the right atrium (RA), left atrium (LA), right ventricle (RV), left ventricle (LV), interventricular septum (IVS), and interatrial septum (IAS). A vertical line (dashed line) is drawn through the middle of the thorax dividing it into two equal left and right halves. About two-thirds of the heart is located in the left hemithorax, with the cardiac axis (yellow arrow) pointing to the left (compare with Fig. 5.1). Note in the region posterior to the heart the presence of two pulmonary veins (pv) draining into the left atrium, the thoracic aorta (Ao) left and anterior to the spine (Sp), the esophagus (Es) between the Ao and LA, and the right (RB) and left (LB) bronchi. The azygos vein (AzV) is seen to the right of the spine. RL, right lung; LL, left lung.

●   EXTERNAL ASPECT OF THE HEART

The right atrium occupies a right anterior position within the heart (Fig. 5.3). The right atrial appendage is well recognized as it shows a broad triangular or pyramidal shape (Figs. 5.3 and 5.4). 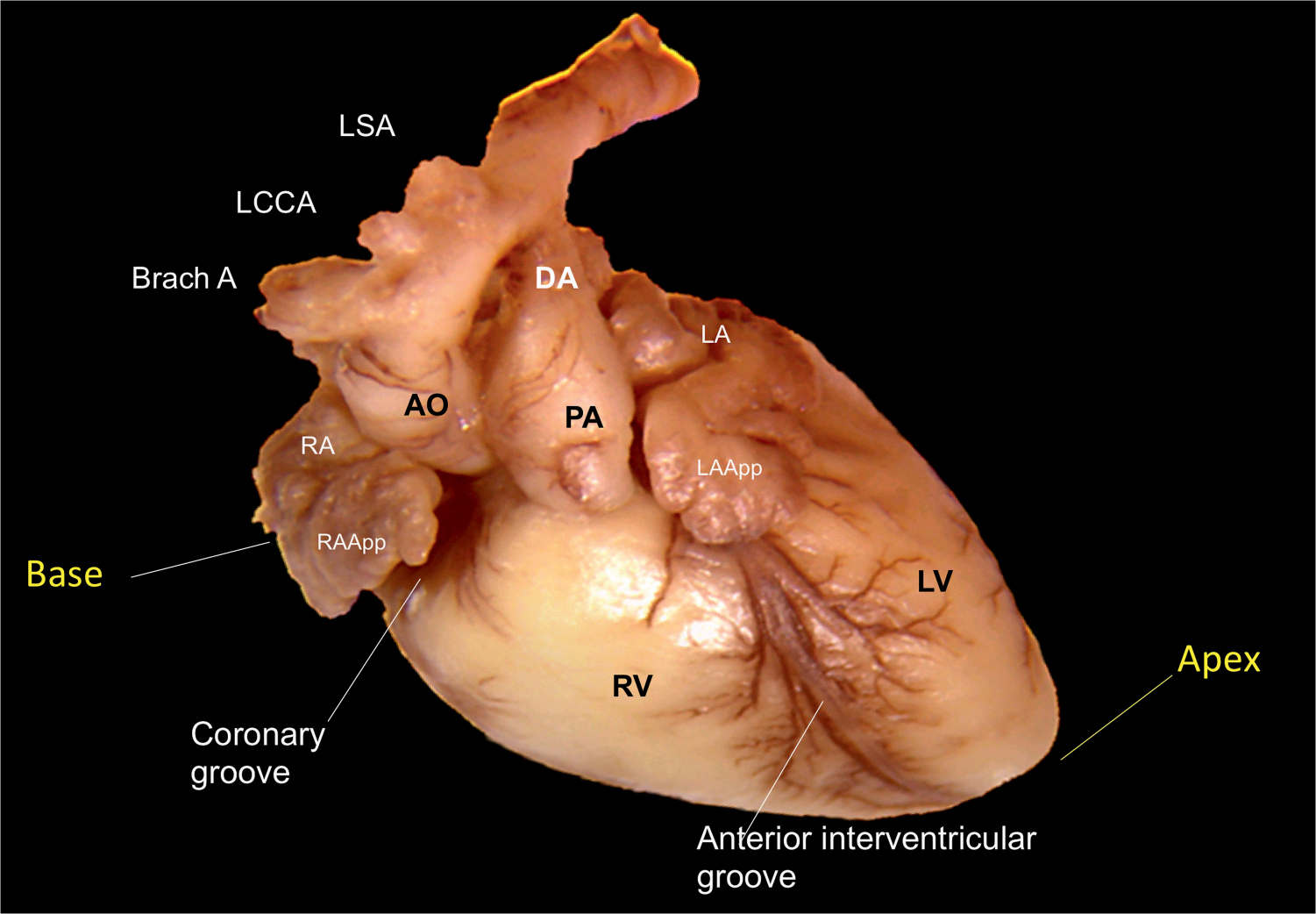 Figure 5.3: Anatomic specimen of the fetal heart shown from an anterior view. The right ventricle (RV) is seen as the most anterior cardiac chamber with the pulmonary artery (PA) arising from it. The anterior interventricular groove separates the RV from the left ventricle (LV). The ductus arteriosus (DA) in the fetus connects the PA with the isthmic region of the aortic arch. The ascending aorta (AO) is seen to the right and posterior to the PA. The three vessels—the brachiocephalic artery (Brach A), the left common carotid artery (LCCA), and the left subclavian artery (LSA)—are seen arising from the transverse aortic arch. Right (RA App) and left (LA App) atrial appendages are also seen. The coronary groove separates the right atrium (RA) from the RV. 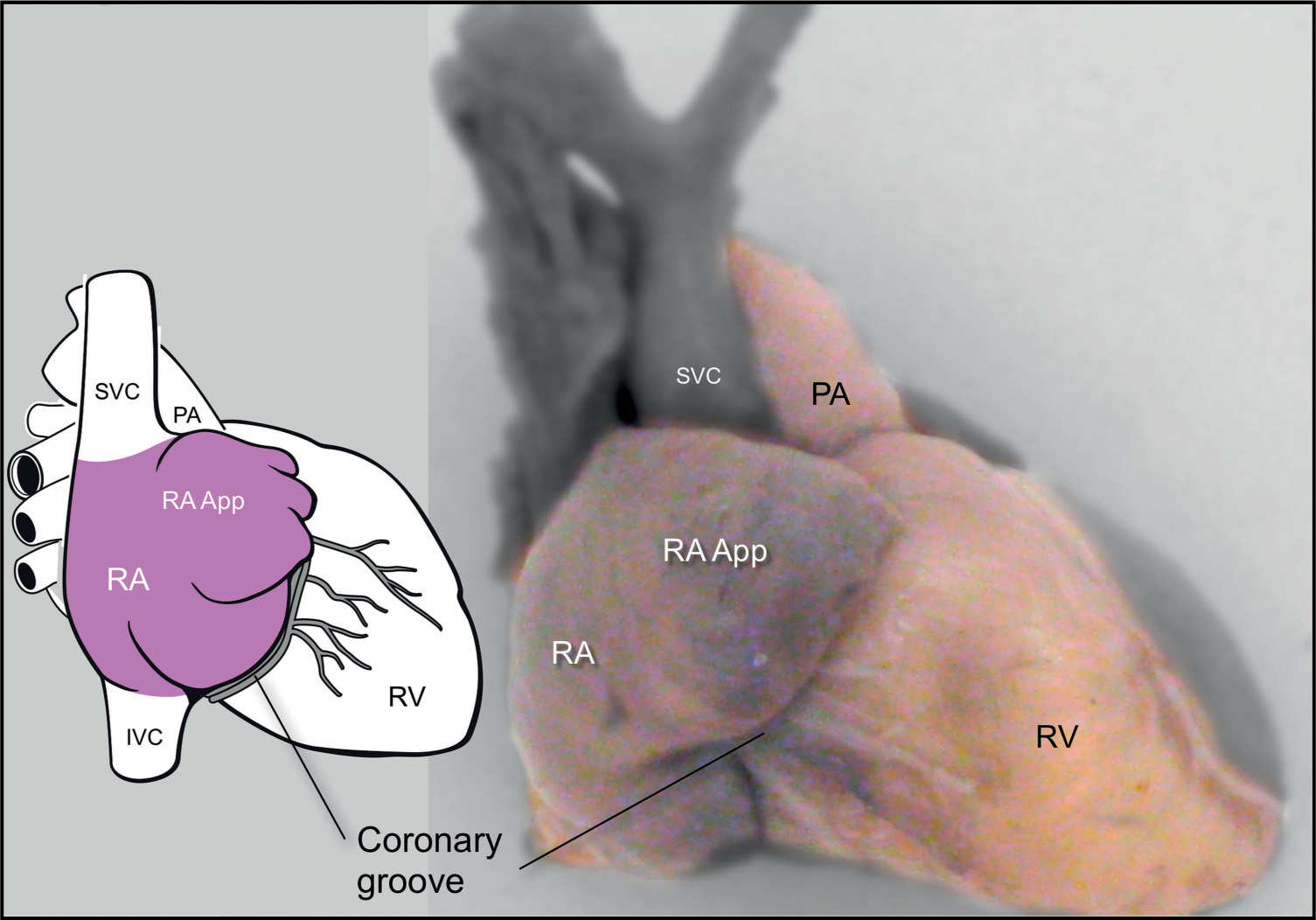 Figure 5.4: Anatomic specimen and a schematic drawing of the anterior right-sided view of the fetal heart. The right atrium (RA), the right atrial appendage (RA App), the right ventricle (RV), and the pulmonary artery (PA) are seen. The superior (SVC) and inferior (IVC) venae cavae enter the RA from its cranial and caudal aspect, respectively.

The pulmonary artery emerges from the right ventricle, crosses over the aorta, and dips posteriorly into the chest. It divides into the right and left pulmonary arteries and the ductus arteriosus. The long axes of the two ventricular outflow tracts are perpendicular to each other (Fig. 5.3).

The aorta, with its long axis parallel to the long axis of the left ventricle, angles anteriorly and points toward the fetal right shoulder (Fig. 5.3) as it exits from the left ventricle and before it arches and descends along the left side of the spine. Three arteries originate from the aortic arch: the brachiocephalic (innominate), the left common carotid, and the left subclavian (Fig. 5.3). The pulmonary artery is anterior to the aorta and points toward the fetal left shoulder as it arises from the right ventricle.

The left atrium, which receives blood from the pulmonary veins, is the most posterior cardiac chamber in proximity to the fetal spine (Fig. 5.2). From an anterior view of the heart, the left atrium is not seen (Fig. 5.3). The left atrial appendage, narrow and fingerlike in shape, can be recognized to the left of the main pulmonary artery.

Similar to the adult heart, in the fetal heart, the left ventricle predominantly contributes to the apex of the heart, as it is longer than the right ventricle (Figs. 5.2 to 5.3). The term base of the heart has been used to describe various anatomic landmarks. It is actually the posterior aspect of the atria (Fig. 5.3), but it is often used to describe the base of the ventricular mass (2). A schematic drawing of the base of the heart (Fig. 5.5) describes the surgical view with both atrioventricular valves and the origin of the great vessels. A comparative image on three-dimensional (3D) ultrasound is shown in Figure 15.16. 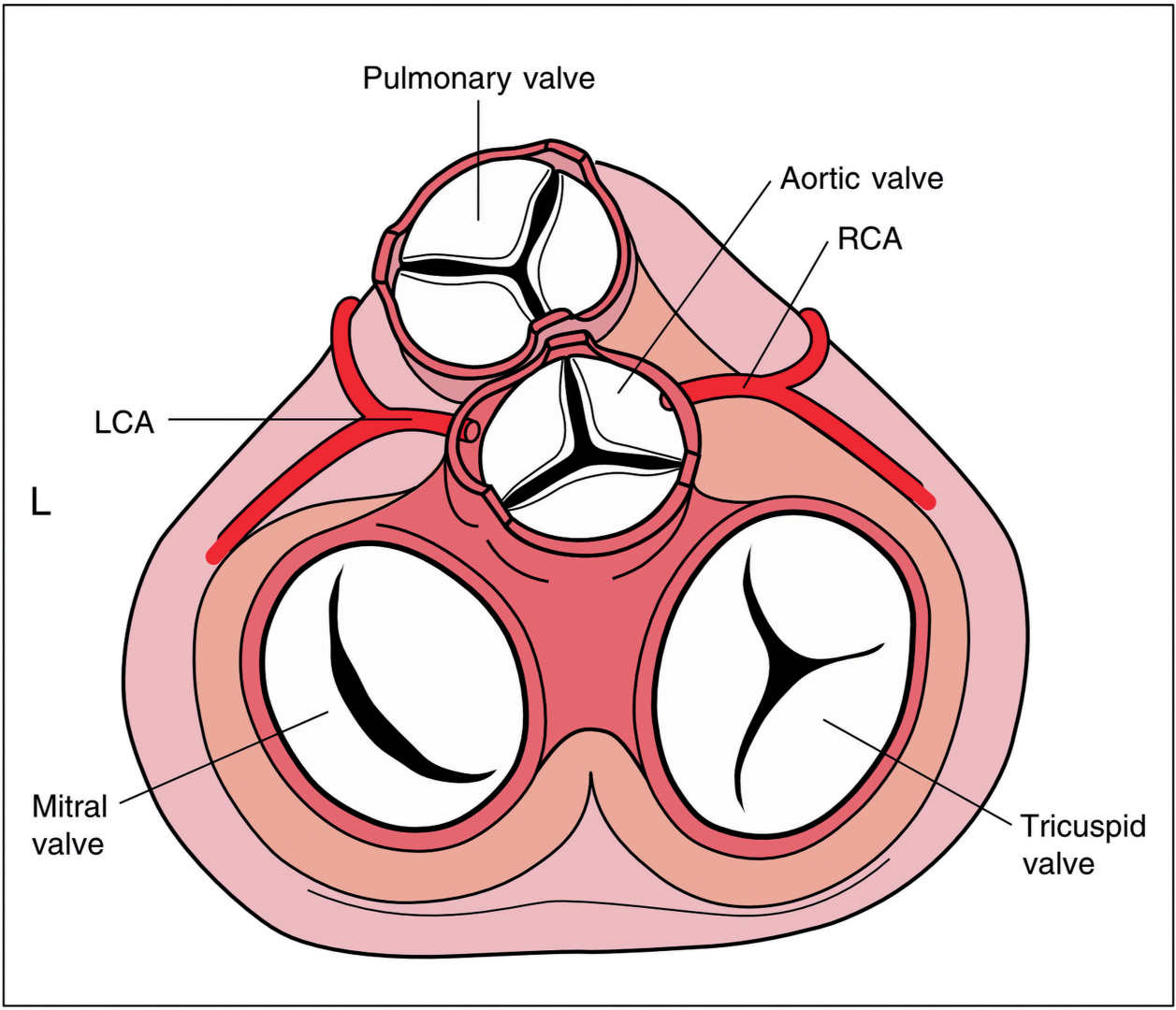 Figure 5.5: Schematic drawing showing the relationship of the semilunar valves to the atrioventricular valves. Note the location of the pulmonary valve, anterior and slightly to the left of the aortic valve. The aortic valve is located in the central portion of the heart, between the tricuspid and mitral valves and posterior to the pulmonary valve. Right (RCA) and left (LCA) coronary arteries are seen to arise from the ascending aorta behind the right and left coronary cusps, respectively. L, left.

The right atrial appendage is somewhat pyramidal in shape and has a broad base (Figs. 5.4 and 5.6). The Chiari network, another embryologic remnant, is composed of lacelike strands and is occasionally seen at the level of the tricuspid valve annulus within the right atrium. Table 5.1 lists the anatomic characteristics of the right atrium. 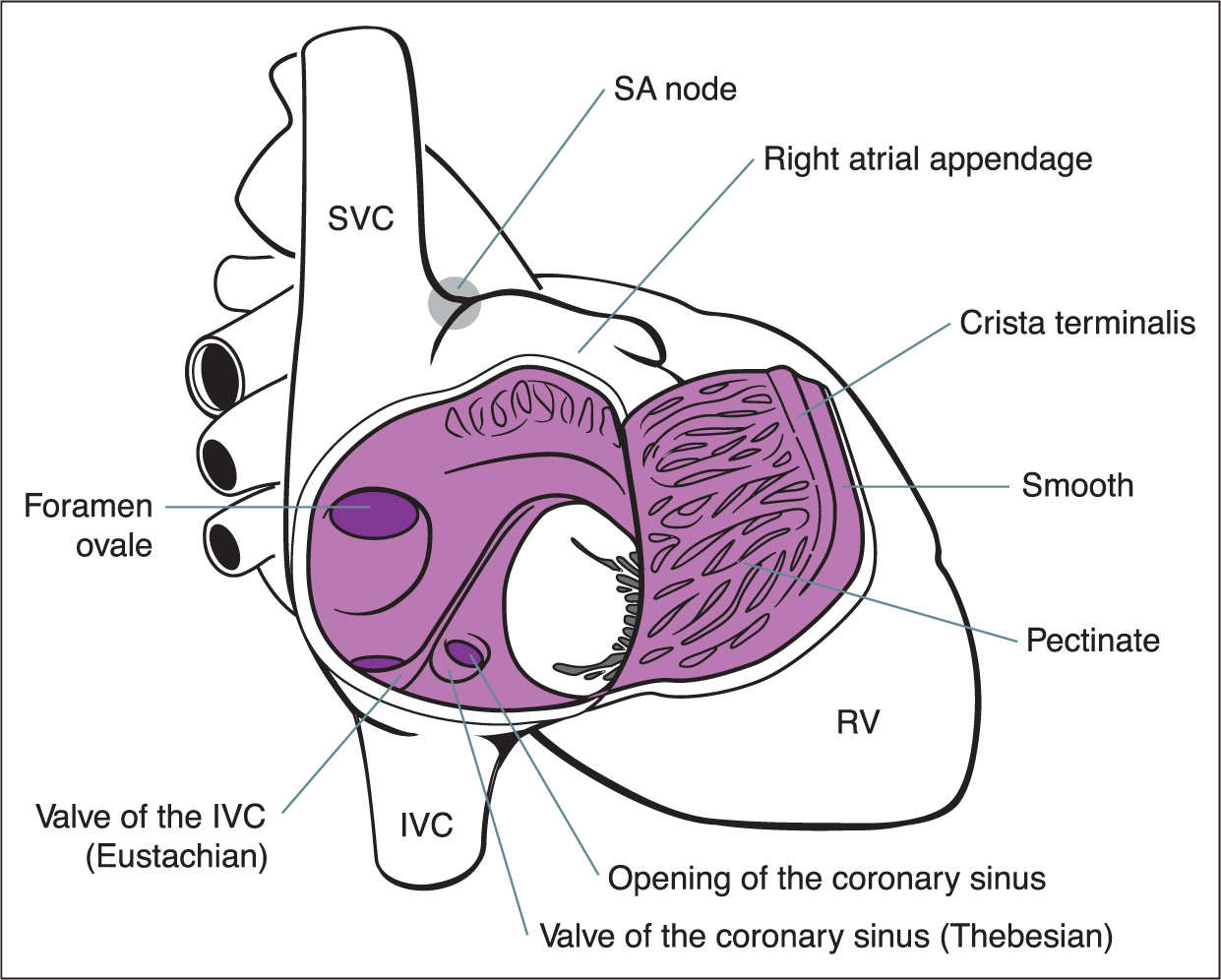 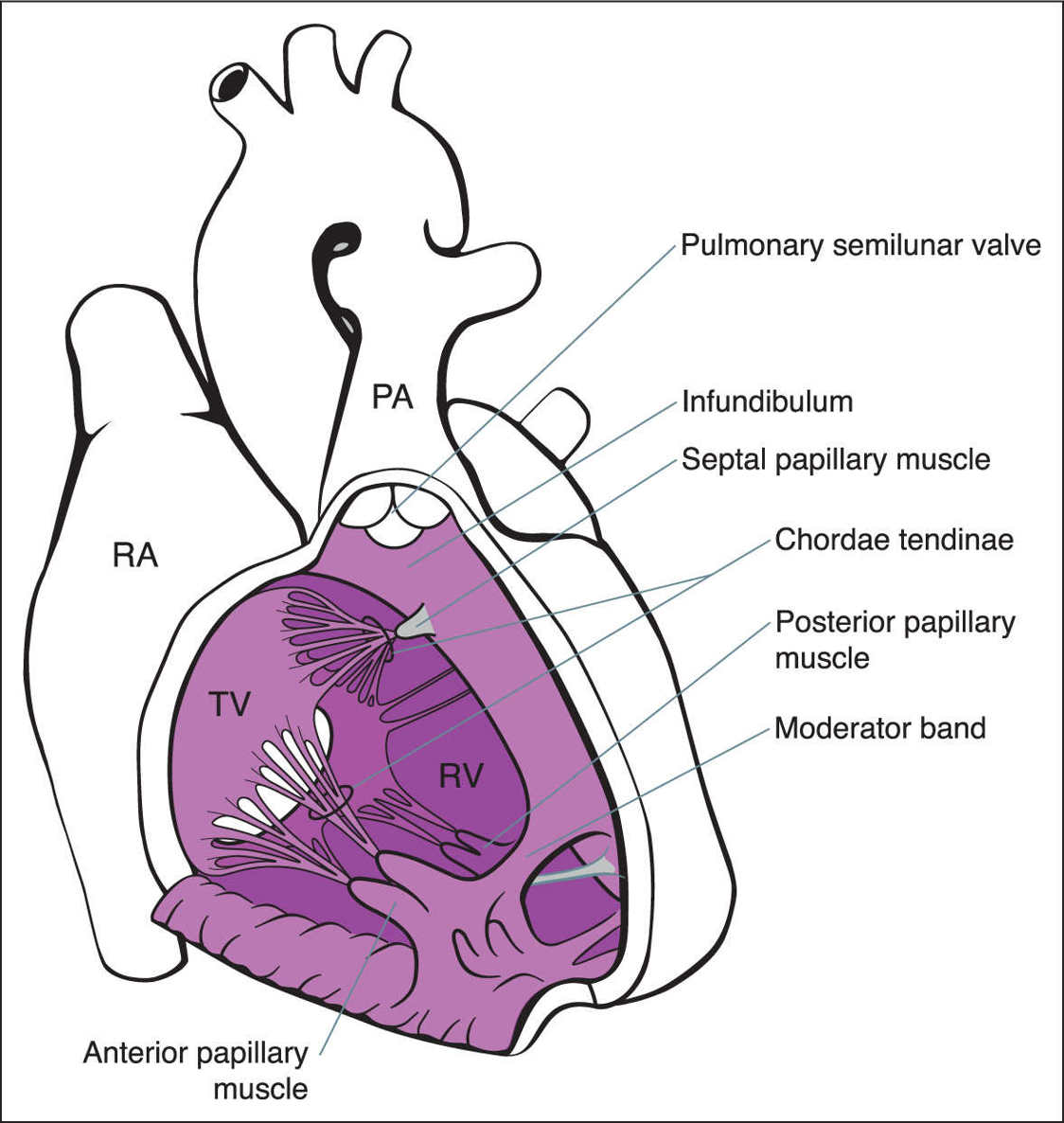 Figure 5.7: Schematic drawing of the internal anatomy of the right ventricle (RV). The RV is made up of an inlet, apical, and outlet portion. The tricuspid valve (TV) is made up of three leaflets and three papillary muscles. The moderator band occupies the apex of the RV. See text for details. RA, right atrium; PA, pulmonary artery.