The Three-Vessel-Trachea View and Upper Mediastinum

The sonographic assessment in axial planes of the vessels in the upper fetal thorax was first described in the mid-1980s (1) and early 1990s (2). The value of these axial planes in the comprehensive evaluation of the fetal cardiovascular system became well known and disseminated in the late 1990s (3). Various names, which corresponded to various anatomic levels, were given to these axial and tangential planes in the upper thorax. These axial and tangential planes assess the ascending aorta and aortic arch, the main pulmonary artery and ductal arch, the superior vena cava (SVC), and other neighboring vessels and structures. From inferior to superior, starting cephalad from the five-chamber view, several planes have been described to include the three-vessel view, the ductal arch view, the three-vessel-trachea (3VT) view, the transverse aortic arch view, and the brachiocephalic vein view (3–9). The three-vessel view describes an axial plane that shows the ascending aorta, the main pulmonary artery, and the SVC, at the site where the SVC enters the right atrium (see Fig. 8.4 and Chapter 8). The 3VT view describes, in a slightly oblique axial plane in the upper mediastinum, the transverse main pulmonary artery and ductal arch, the transverse aortic arch and its isthmic region, and the cross sections of the SVC and trachea (Fig. 9.1). This plane is part of the fetal echocardiography examination and is suggested in cardiac screening guidelines (10–12). The authors believe that the 3VT view is a very important plane for the assessment of great vessels and upper venous system, in addition to the neighboring anatomic structures in the upper mediastinum. It is for this reason that we decided to dedicate a full chapter of this book on this topic. In order to better understand the clinical value of this plane, we hereby describe its normal anatomy and include several cardiac abnormalities associated with abnormal 3VT views. 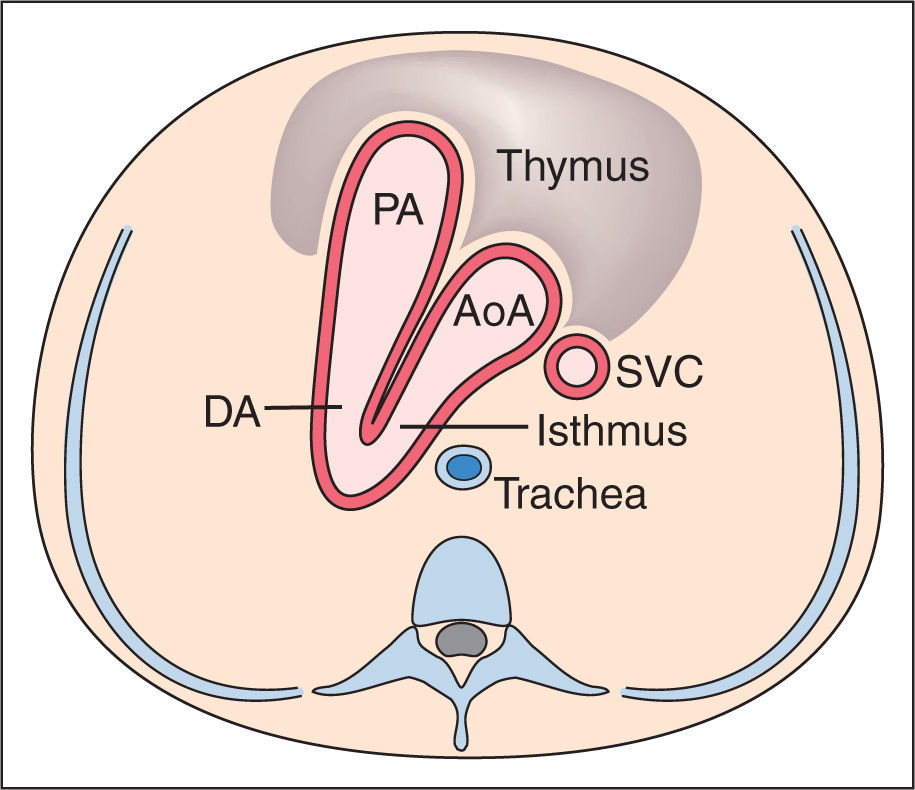 Figure 9.1: Schematic drawing of a cross section of the upper mediastinum at the level of the three-vessel-trachea view. Note that the transverse aortic arch (AoA) and isthmus merge with the pulmonary artery (PA) and ductus arteriosus (DA) into the descending aorta in a “V-shape” configuration. Both vessels point to the left of the trachea, which is found central and anterior to the spine. The superior vena cava (SVC) is anterior to the trachea and on the right of the AoA. The space between the great vessels and the anterior sternal wall is occupied by the thymus.

●   SCANNING TECHNIQUE FOR THE THREE-VESSEL-TRACHEA VIEW AND UPPER MEDIASTINUM

2.   Obtain a four-chamber view of the fetal heart (see Chapter 7).

3.   Obtain a three-vessel view by sliding the transducer cranially while maintaining the transverse orientation in the chest (see Chapter 8).

4.   From the three-vessel view, the 3VT view can be obtained by slightly angling the transducer caudally, toward the fetal left side (Fig. 8.1), until the fusion of aortic and ductal arches are visualized (Figs. 9.1 to 9.4). In this plane, several great vessel abnormalities can be demonstrated as shown in this chapter.

5.   Anterior to the 3VT and behind the anterior chest wall, the thymus is identified as a hypoechoic structure, with often clear lateral borders as compared to the slightly more echogenic neighboring lungs. A higher frequency transducer and/or high-resolution settings allows for a better delineation of the thymus, where measurements can be performed and abnormalities identified.

6.   Moving the transducer further cranially and slightly oblique to the left, from the 3VT view, the SVC is noted as it connects with the brachiocephalic vein. The brachiocephalic vein runs from the posterior left upper to the anterior right thorax as it connects with the SVC. In this upper thoracic plane, the great vessels are not seen, as they are inferior in anatomic location. 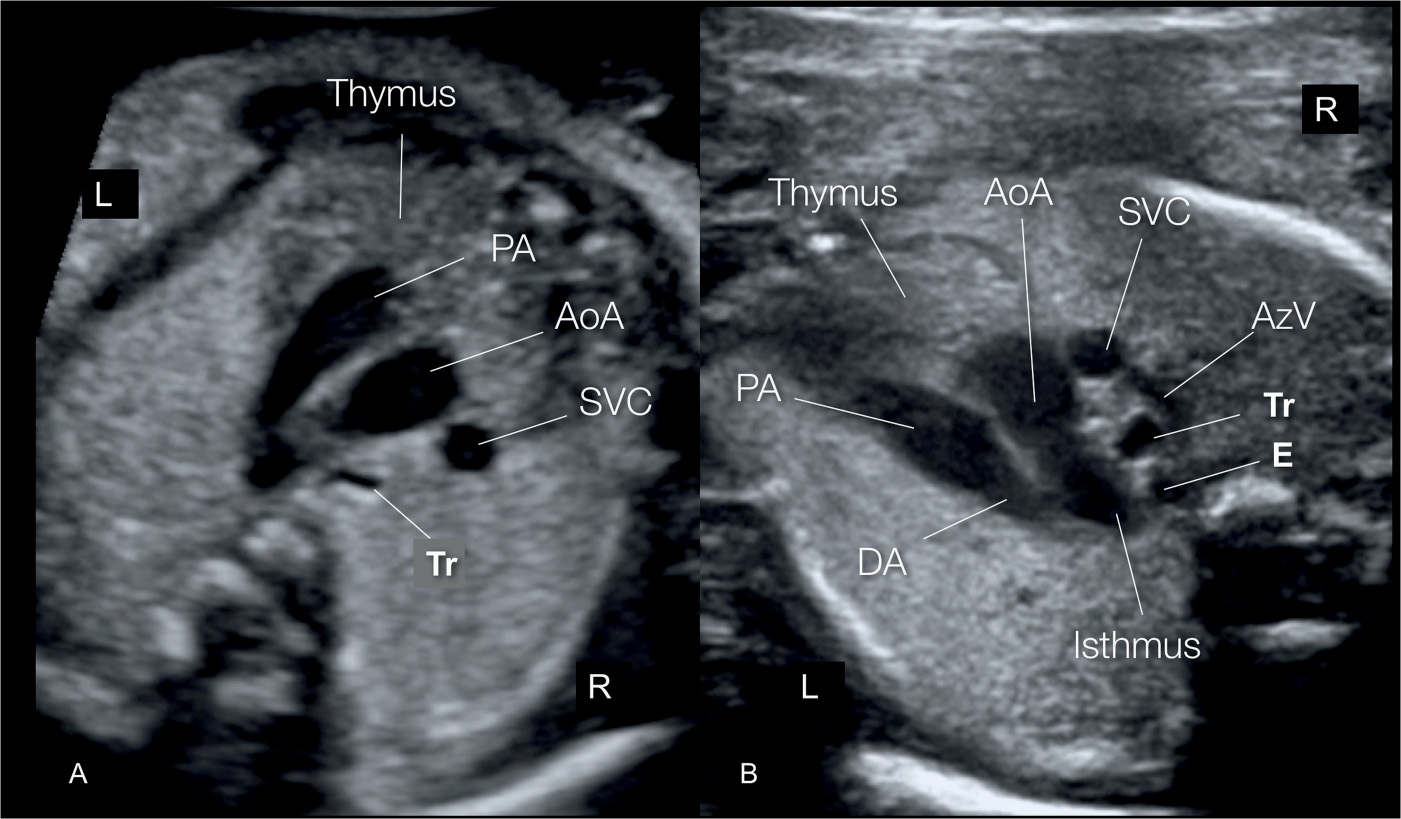 Figure 9.2: Three-vessel-trachea view shown on grayscale ultrasound using a normal transducer (A) and a high-resolution linear transducer (B). Note in A and B the aortic arch (AoA) and ductal arch (DA) merging together with a course to the left of the spine and trachea (Tr). The superior vena cava (SVC) is located to the right of the aortic arch (compare with Fig. 9.1). Note in B the azygos vein draining into the SVC and the esophagus (E) posterior to the Tr. The thymus gland is seen anteriorly. PA, pulmonary artery; L, left; R, right. Compare with Figure 9.5A. 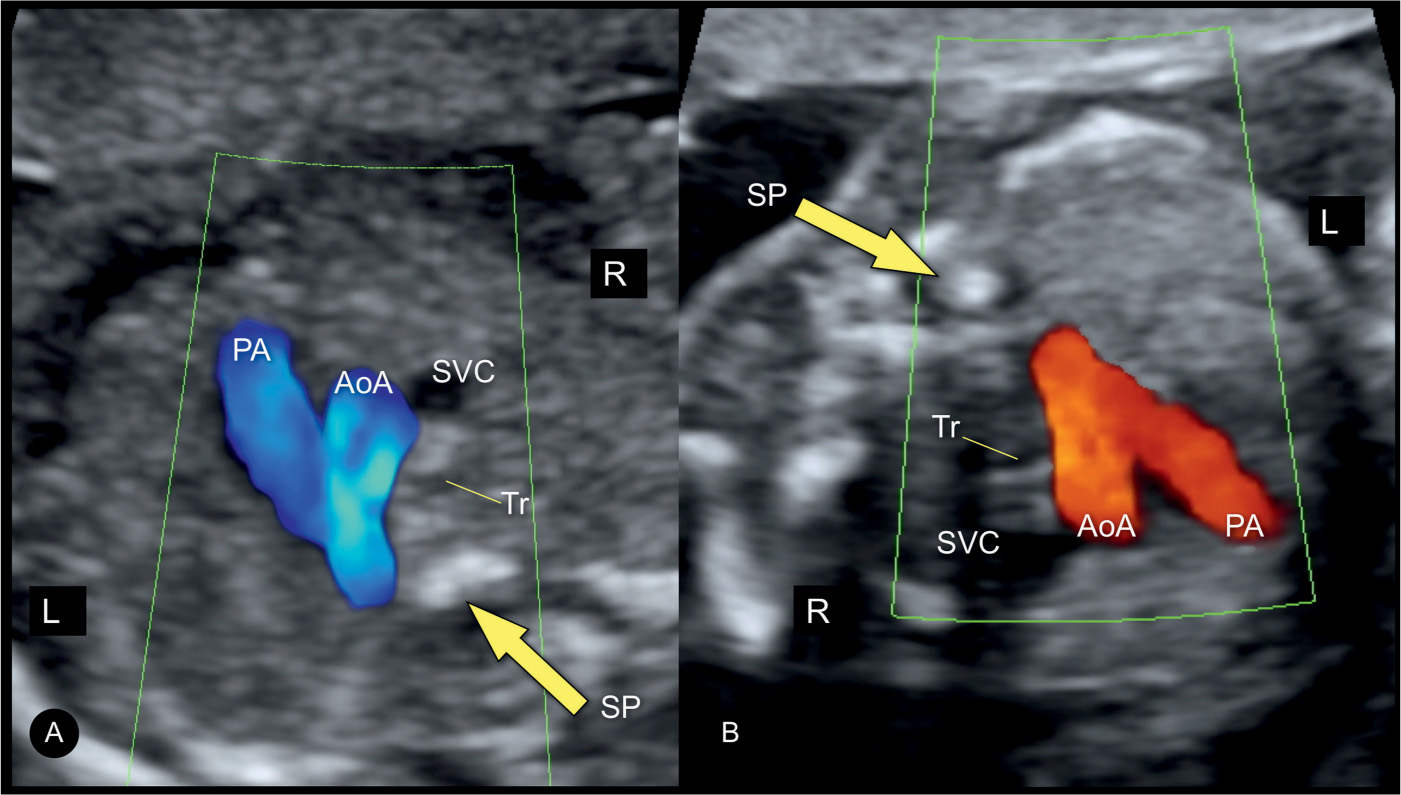 Figure 9.3: Three-vessel-trachea view shown on color Doppler from a ventral (A) or dorsal (B) insonation. Note in A the flow in the great vessels is in blue color and in B in red color, both toward the descending aorta (spine). AoA, aortic arch; PA, pulmonary artery; SP, spine; SVC, superior vena cava; Tr, trachea; L, left; R, right. 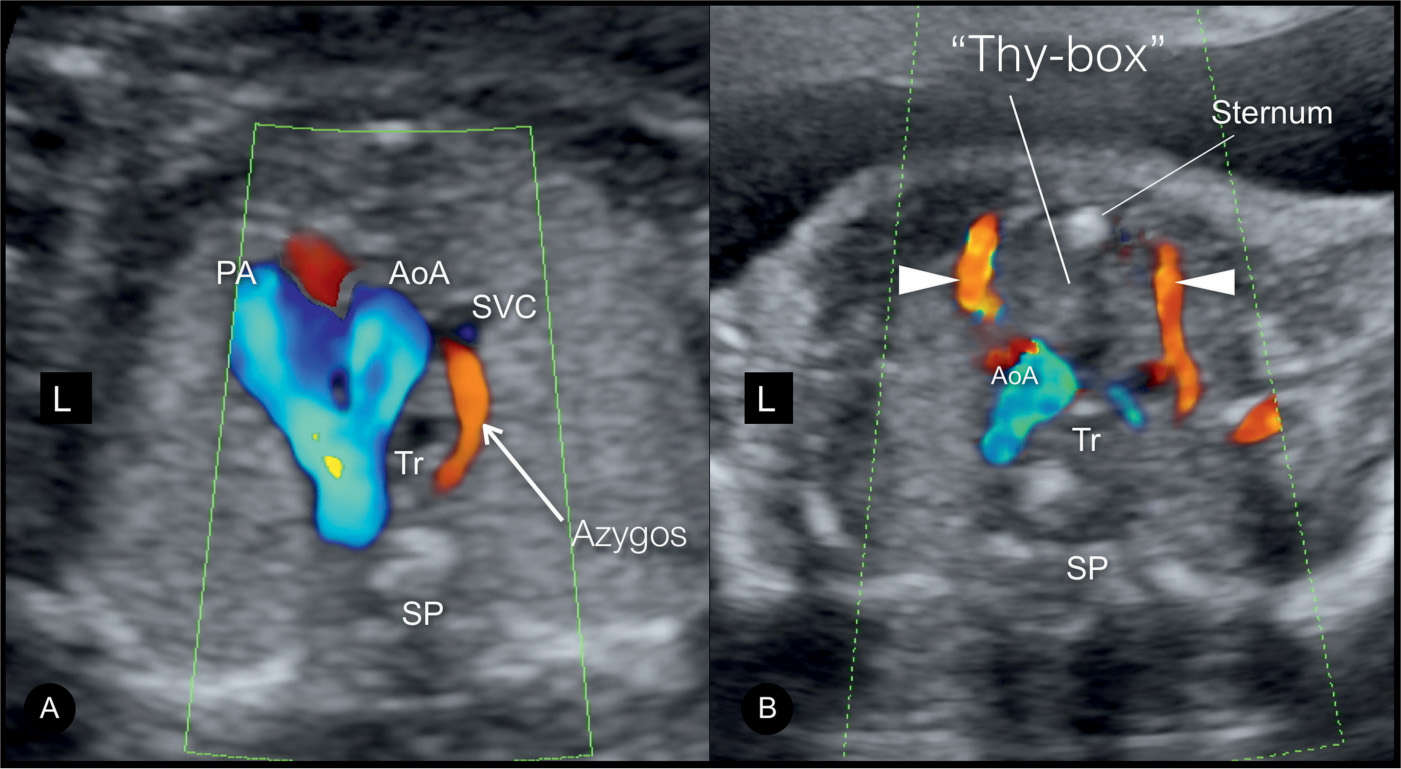 Normal Findings in the Three-Vessel-Trachea View

In the 3VT view, the aortic and ductal arches are seen as they merge together into the descending aorta with an acute angle between them (Figs. 9.1 to 9.3). Both arches are located to the left of the spine and trachea, an important anatomic landmark, as no vessel should be seen to the right of the trachea in normal cardiovascular anatomy. Directly anterior to the spine, the trachea is recognized as a circular structure with an echogenic wall and a black lumen (Fig. 9.2).

The SVC is seen in a cross section and is located to the right of the aortic arch (Fig. 9.2). The three vessels have an oblique line orientation with the ductal arch, the largest of the three, assuming a more anterior position; the aortic arch, slightly smaller than the ductal arch, in the middle; and the SVC, the smallest of the three, in a more inferior position (Fig. 9.2). Figure 5.17 in Chapter 5 shows the relationship of the aortic and ductal arches in an anatomic specimen, where the SVC has been removed.

Color Doppler reveals anteroposterior flow in both ductal and aortic arches (7) (Fig. 9.3). By reducing the color Doppler velocity scale, blood flow in the SVC and the azygos arch entering the SVC is recognized (Fig. 9.4A). By further lowering the color Doppler velocity scale and orienting the transducer in a slightly more cranial plane, the mammarian arteries can be visualized running on the lateral borders of the thymus (Fig. 9.4B) in a view called the “thy-box” (13). A more cranial plane will show blood flow in the left brachiocephalic vein (LBCV), in a left-to-right direction (14), which is always opposite to the direction of the aortic blood flow seen in a more caudal plane (see Chapter 10).

As shown in various chapters within this book, cardiac anomalies involving the great vessels are commonly associated with abnormal appearances of the 3VT views. In few conditions, however, the abnormal 3VT is pathognomonic or highly suggestive for a specific cardiovascular abnormality (9). An abnormal 3VT view can thus provide clues for certain group of abnormalities, which requires confirmation following a comprehensive examination of the fetal heart (9). In this section, we present common 3VT view abnormalities, and discuss various associations with certain cardiovascular abnormalities. For a more comprehensive list of associations between an abnormal 3VT view and congenital heart disease, the readers are referred to this book’s chapters on abnormal hearts and various review articles (5–9, 15). 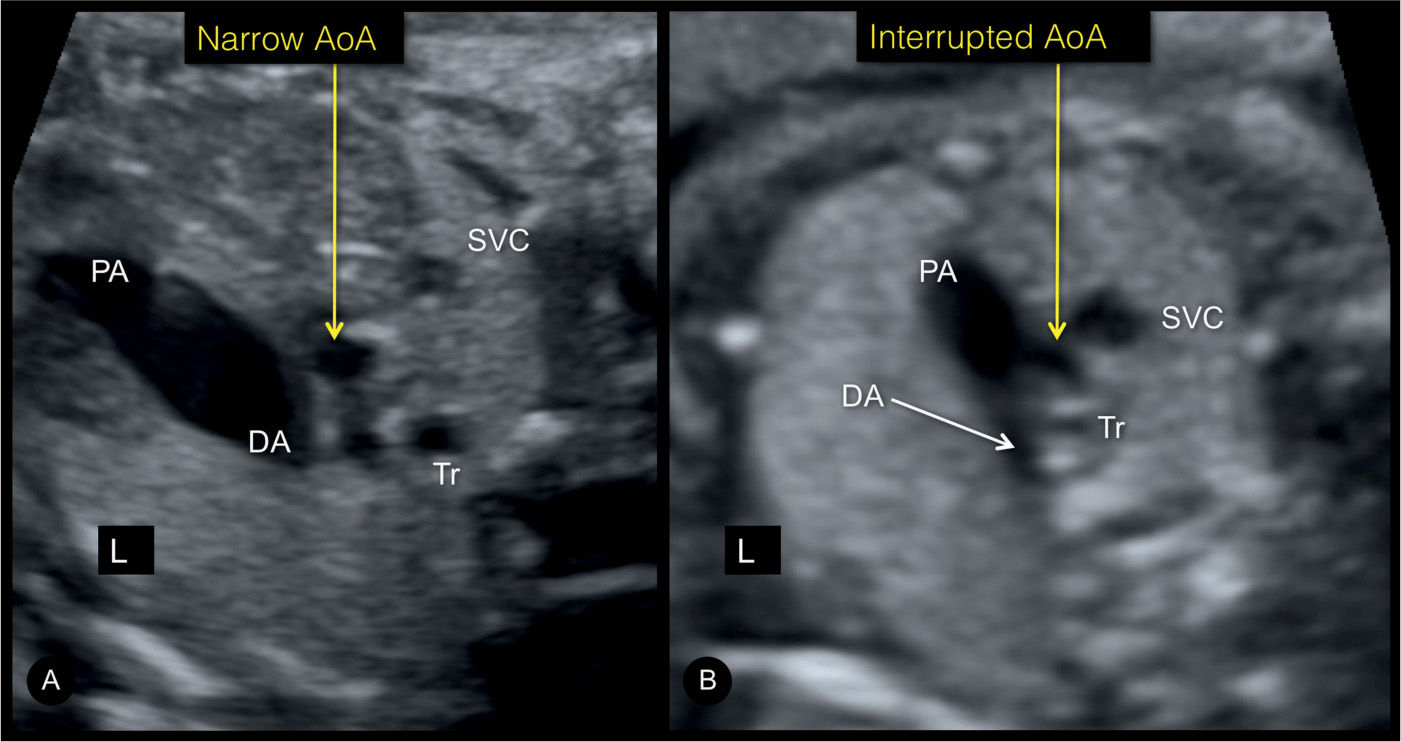 Figure 9.5: Three-vessel-trachea view in a fetus with a narrow aortic arch (AoA) in aortic coarctation (A) and in a fetus with an interrupted aortic arch (B). Note the absence of AoA continuity in B. DA, ductus arteriosus; PA, pulmonary artery; SVC, superior vena cava; Tr, trachea; L, left. 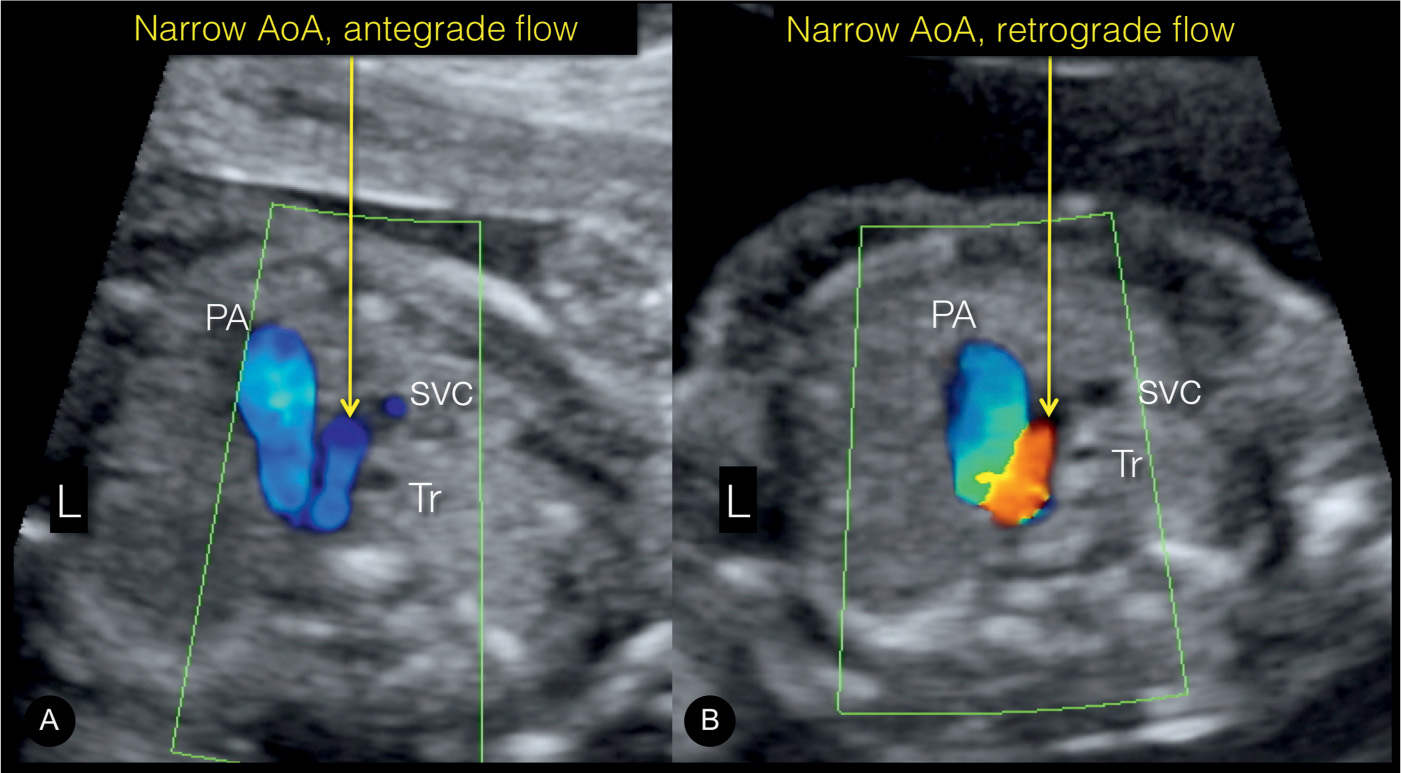 Figure 9.6: Three-vessel-trachea view in color Doppler in two fetuses with a narrow aortic arch (AoA). Note the presence of antegrade AoA flow in fetus A, suggestive of an aortic coarctation. In fetus B, retrograde flow in the AoA is seen, which is typical for hypoplastic left heart syndrome with aortic atresia. PA, pulmonary artery; SVC, superior vena cava; Tr, trachea; L, left.

A dilated transverse aortic arch in the 3VT view can be found in isolated aortic valve stenosis with poststenotic dilation of the aorta. Color Doppler confirms the diagnosis with typical turbulent antegrade flow of high velocity. 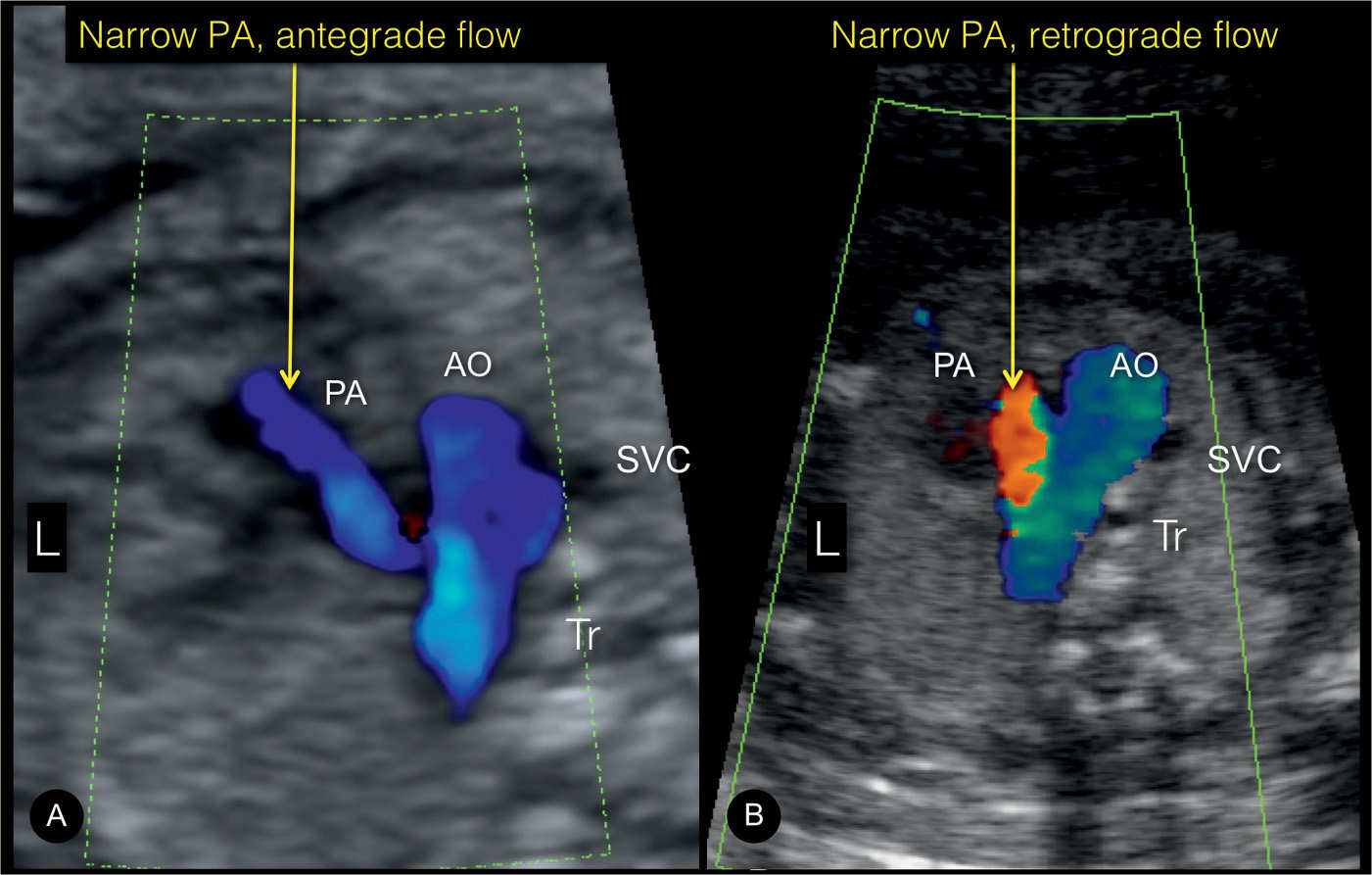 Figure 9.7: Three-vessel-trachea view in color Doppler in two fetuses with a narrow pulmonary artery (PA). Note the presence of antegrade PA flow in fetus A, suggestive of reduced flow pattern as in pulmonary stenosis in tetralogy of Fallot. In fetus B, retrograde flow in the PA is seen, which is typical for pulmonary atresia. AO, aorta; SVC, superior vena cava; Tr, trachea; L, left.