The skin of a newborn infant differs from adult skin in several ways that place infants at increased risk for thermal instability, skin damage, percutaneous infection, and percutaneous toxicity from topically applied agents. The neonatal body surface area-to-weight ratio is up to 5 times greater than that of an adult, and the thickness of infant skin is 40% to 60% less.1 Attenuated rete ridges, formed from comparatively fewer stem cells at the basal layer, provide a relatively limited area of surface attachment to an immature dermis, resulting in relative skin fragility. Sebaceous glands are hypertrophic for several weeks after birth, under the influence of fetal and maternal androgens, but eccrine function does not mature until after term, placing newborns at risk for hyperthermia with overbundling. The vernix caseosa is composed of sloughed keratinocyte and sebaceous gland lipids, with a higher proportion of glandular lipids in boys.

The most clinically significant difference between the skin of a premature and that of a term infant is the barrier function of the most superficial layer of the epidermis, the stratum corneum. Infants born before 32 weeks of gestation have a very thin stratum corneum. Although even in premature neonates, the stratum corneum matures within 2 weeks after birth, premature infants suffer from significant transepidermal water loss with associated hypothermia and fluid and electrolyte disturbances. These problems are proportional to the degree of prematurity. Transepidermal water loss is 10 times higher for an infant born at 24 weeks of gestation than for a term neonate.2 Barrier function rapidly improves during the first 2 weeks after birth, but infants born at 25 weeks or less can have increased transepidermal water loss for significantly longer than 4 weeks after gestation.3 Benign clinical interventions such as barrier creams or ointments can dramatically decrease these losses. During this period, cutaneous contact with chemicals that can cause neurotoxicity, such as hexachlorophene, or alter thyroid function, such as povi-done iodine, should be avoided.2,4 Desiccated skin is even more susceptible to injury, providing a portal of entry for invading microbes and increasing the risk of disseminated infection.

The congenital absence of skin is a cutaneous anomaly most often seen at the scalp vertex. Sharply marginated lesions may present either singly or as multiple ulcers, bullae, or scars that measure up to several centimeters in diameter (eFig. 357.1

). Aplasia cutis can have underlying skull defects, and larger irregular defects may extend to the dura or meninges. These larger lesions are more often familial and may be complicated by meningitis, hemorrhage (which can be fatal), or sagittal sinus thrombosis.5 Aplasia cutis of the trunk and extremities is often strikingly symmetric in distribution. Histologically, aplasia cutis is characterized by absent epidermis, diminished dermis and adnexal structures, or, in full-thickness lesions, the absence of all skin layers.

The cause of aplasia cutis congenita is unknown, but incomplete closure of the neural tube or embryonic fusion lines has been proposed as a possible etiology.6 The findings of a twin fetus papyraceous and/or a placental infarct have suggested vascular thrombosis as a cause in infants with lesions on the trunk and limbs.

Cutaneous and bony lesions usually heal spontaneously over a period of weeks to months. A hypertrophic or atrophic patch of alopecia remains. Lesions that fail to heal or produce cosmetically unacceptable scars can be excised with primary closure after appropriate imaging is done to rule out underlying defects.

Midline circumscribed or annular hypertrichosis, dimples, sinuses, skin tags, nodules, and cysts may be isolated skin findings or may mark underlying developmental defects. The differential diagnosis of lesions on the brow or nose includes dermoid cyst or sinus, glioma, and encephalocele. Congenital defects that present as a midline scalp nodule include encephalocele, meningocele, aplasia cutis, dermoid cyst or sinus, and heterotopic brain tissue. If the diagnosis of a midline scalp lesion is clinically uncertain, skin biopsy should be postponed until after radiographic imaging by computed tomography or magnetic resonance imaging. These studies may miss small associated intracranial connections, however.

A midline pit or nodule on the neck may represent a cervical cleft or thyroglossal duct cyst or sinus. A remnant of respiratory epithelium known as a bronchogenic sinus or cyst presents at birth as a nodule or pit at the suprasternal notch. Branchial cleft anomalies, cysts or sinuses, are located along the preauricular area, pinna, and lateral neck.

These sinuses and cysts can be watched expectantly or electively removed by surgical excision to prevent drainage or infection.

). Sacral dimples or sinuses are common lesions and are of more concern when they occur superior to the gluteal cleft or in combination with other cutaneous signs of dysraphism. Diffuse hypertrichosis and nevus flammeus are also commonly seen over the lumbar spine, and in isolation, they are less likely to be a sign of spinal dysraphism. In contrast, radiographic imaging is indicated for sacral hemangiomas, lipomas, or skin tags.

Amniotic bands cause circumferential ringlike constrictions on the skin, most commonly on the extremities. They are present at the time of birth and appear to be caused by separation of the amnion from the chorion, giving rise to strands of amnion, which disrupt normal morphogenesis. Amniotic bands can cause a multitude of other abnormalities, including limb amputations, syndactyly, thoracoabdominal wall defects (eg, gastroschisis, omphalocele), and craniofacial clefts.

Supernumerary nipples are reddish brown papules or dells that occur anywhere along the embryologic milk lines of the chest, abdomen, or, rarely, the inguinal area (eFig. 357.3

). They may be accompanied by breast tissue and are sometimes mistaken for melanocytic nevi. Further evaluation and treatment is usually unnecessary. Supernumerary nipples may be electively removed by surgical excision.

Accessory tragi are pedunculated flesh-colored papules occurring anywhere from the preauricular area to the angle of the mouth (eFig. 357.4

). They are present at birth and can be multiple or bilateral. They are usually localized lesions but can be associated with other branchial arch syndromes. Association with deafness and renal abnormalities is controversial, and screening is only recommended if there are other worrisome features present. They should be removed by an experienced surgeon because most lesions contain cartilage and may have connection with the external ear canal.

Most common on the fifth finger, supernumerary digits can range from subtle papules to full-sized digits. These lesions often contain cartilage and nerves; thus, they should not be ligated but instead removed by a surgeon with nerve dissection to avoid development of a traumatic neuroma.

These white-colored papules along the ventral penis, scrotum, and perineum represent incomplete closure of the urethral and/or genital folds (eFig. 357.5

). They are usually asymptomatic and resolve over time without treatment.

Usually a localized lesion on the scalp or face, nevus sebaceus presents at birth as a hairless linear plaque of coalesced salmon- to yellow-colored papules (Fig. 357-1). A biopsy reveals absent to malformed hair follicles with an abundance of sebaceous glands. Because of the 10% to 30% risk of tumor formation, especially basal cell carcinoma, removal by adolescence is usually recommended.7

Epidermal nevi are composed of verrucous-appearing, tan to brown, linear coalescing papules, which can be present at birth but often develop later in childhood. The distribution and size is variable, but lesions are more commonly localized, and the neck, trunk, and extremities are common sites. Treatment is difficult because recurrence is common after destruction or excision. 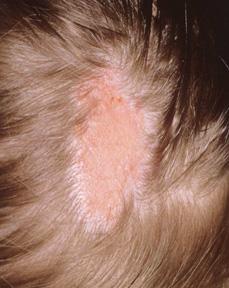