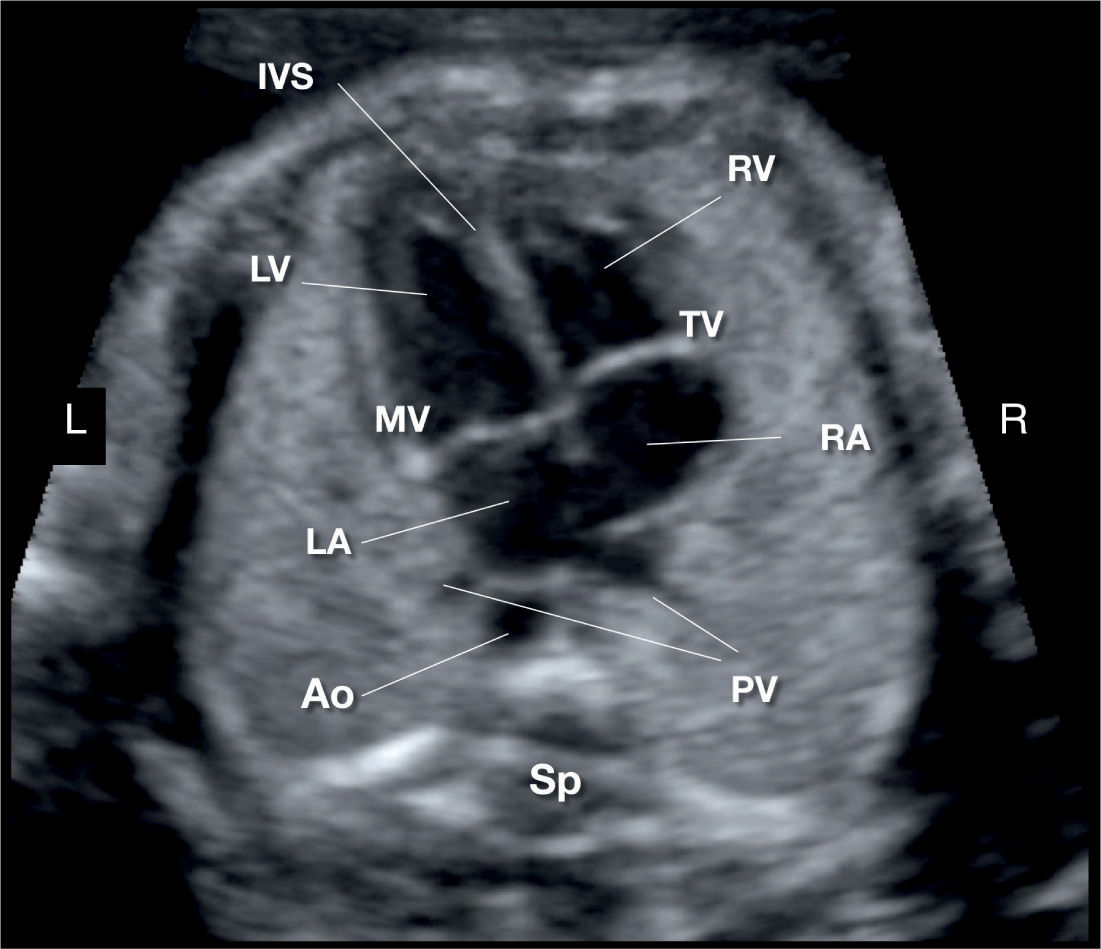 1.   Determine the fetal situs, as previously described in Chapter 6.


Evaluation of the Four-Chamber View

The fetal heart lies almost horizontally in the thorax with the four-chamber view plane obtained in almost the same plane as a transverse plane of the chest. In postnatal life, the cardiac apex swings inferiorly and the heart is thus positioned more vertically in the thoracic cavity. The fetal rib corresponding to a four-chamber view plane of the fetal heart is the fourth thoracic rib (5).

As stated, a significant advantage of the four-chamber view is that it can be fairly easily obtained in all fetal positions. Based on the position and fetal lie in the uterus, four types of four-chamber views of the fetal heart can be obtained (Fig. 7.3):

1.   When the fetal anterior chest wall is closest to the transducer, an apical four-chamber view is obtained (Fig. 7.3A). In this fetal position, the ultrasound beam is nearly parallel to the ventricular septum, and it insonates the apical portion of the fetal heart first.

2.   When the fetal right posterior chest wall is closest to the transducer, a basal four-chamber view is obtained (Fig. 7.3D). In this fetal position, the ultrasound beam enters the fetal chest inferior to the right shoulder; nearly parallel to the ventricular septum and it insonates the base of the fetal heart first.

3.   When the fetal spine is neither anterior nor posterior but closer to the right or left lateral uterine walls, a lateral four-chamber view (axial) is obtained either from the left (Fig. 7.3C) or from the right (Fig. 7.3B). In this fetal position, the ultrasound beam is nearly perpendicular to the ventricular septum. 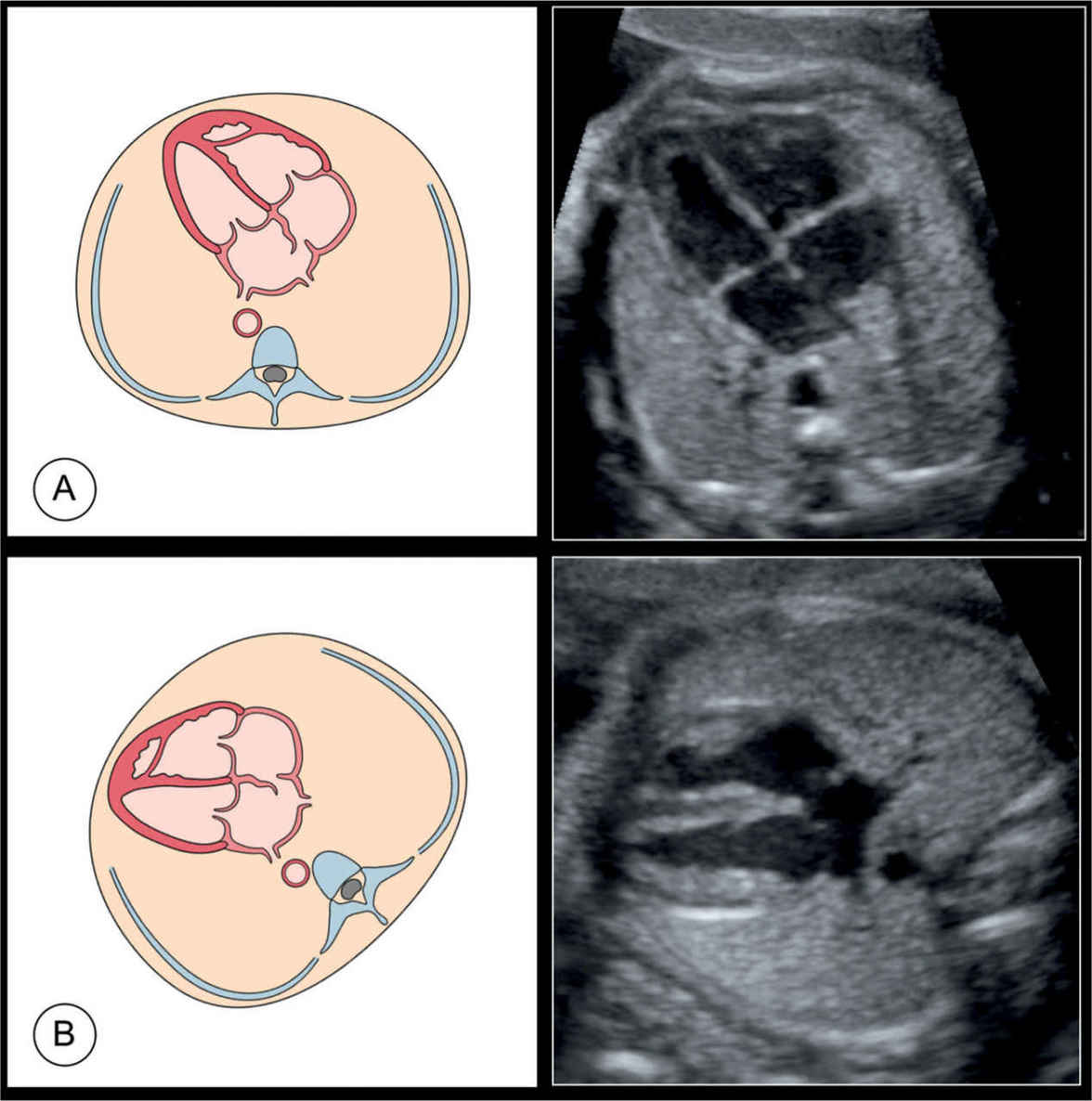 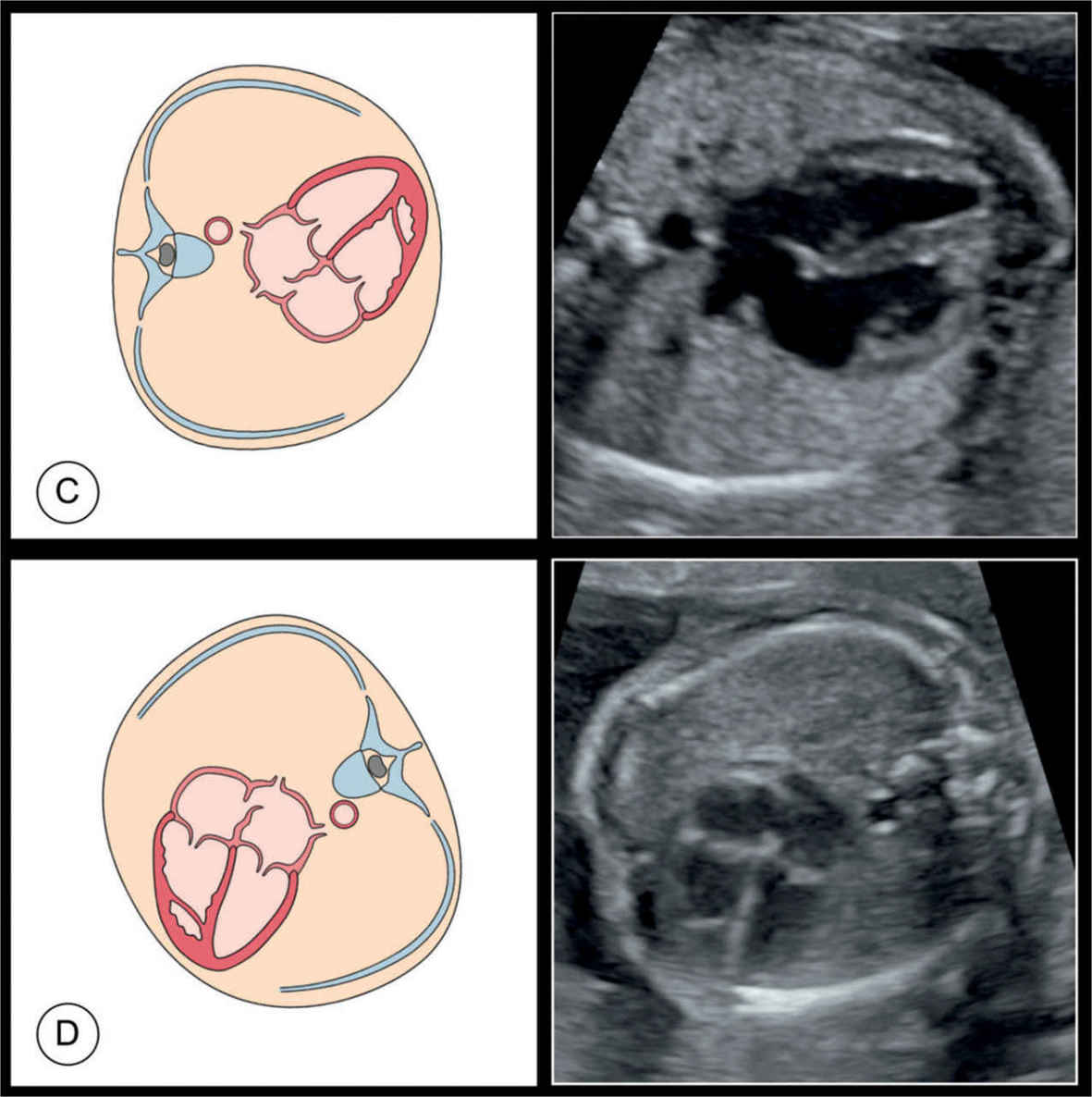 By drawing a line from the spine posteriorly to the sternum anteriorly that bisects the chest into two equal halves (Fig. 7.4A), the heart is divided into two parts: one part is in the right chest and has about one-third of the heart mass, and a second part is in the left chest and has about two-thirds of the heart mass. The normal cardiac axis points to the left with an angle of about 45 degrees (Fig. 7.4A). For further details on the thoracic situs, cardiac position, and axis, see Chapter 6. 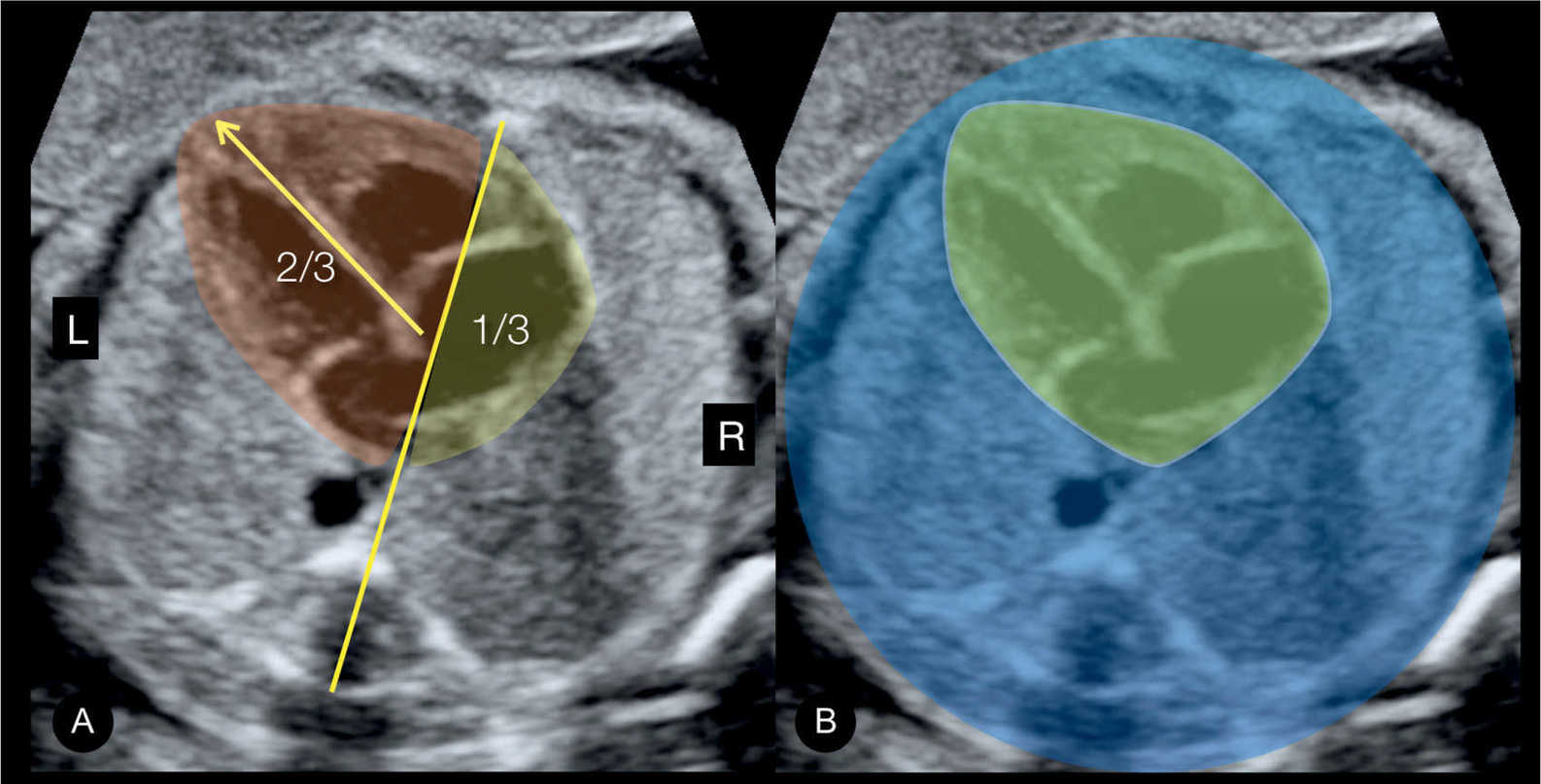 Figure 7.4: Four-chamber view in gray scale in A and B (same fetus) showing the anatomic position of the heart in the chest. In A, an imaginary line is drawn from the spine posteriorly to the sternum anteriorly, dividing the thorax in two equal parts: left (L) and right (R). Note in A the anatomic location of the normal heart (shaded), with one-third in the right chest and two-thirds in the left chest. The cardiac axis (arrow in A) points to the left side (compare with Figure 6.4). In B, the heart is shaded in green and the remainder of the chest in blue. Note that the area of the heart occupies about one-third of the chest area.

The heart size, assessed as surface area and circumference, is about one-third to one-half that of the thoracic cavity in transverse view (Fig. 7.4B). The width of the heart, at the level of the atrioventricular valves, corresponds approximately to gestational age in weeks (see also Chapter 17). Fetal cardiac dimensions can be easily assessed by measuring the ratio of cardiac circumference or area to the chest circumference or area obtained at the level of the four-chamber view. The cardiothoracic (C/T) circumference is fairly constant throughout gestation, with a mean value of 0.45 at 17 weeks and 0.50 at term (6). The mean C/T circumference in the first half of pregnancy increases slightly with gestational age, from 0.38 at 11 weeks to 0.45 at 20 weeks, with all values at less than 0.50 in normal fetuses (7). The C/T area is an alternate method for assessing cardiac dimensions, and normal values are fairly constant throughout gestation, with a mean value between 0.25 and 0.35 (8). Fetal cardiomegaly, defined as C/T area greater than two standard deviations in one series, encompasses heterogeneous etiologies, including cardiac and extracardiac abnormalities (8). Holosystolic tricuspid regurgitation with right atrial enlargement is a common feature and is seen in almost 90% of fetal cardiomegaly cases (8). Table 7.2 lists common causes of fetal cardiomegaly.

Assessing chamber contractility in real-time ultrasound is part of the evaluation of the four-chamber view. In the normal fetal heart, left and right ventricular contractility should be equal without any paradoxical movements of the interventricular septum.

The Right and Left Atria and the Interatrial Septum 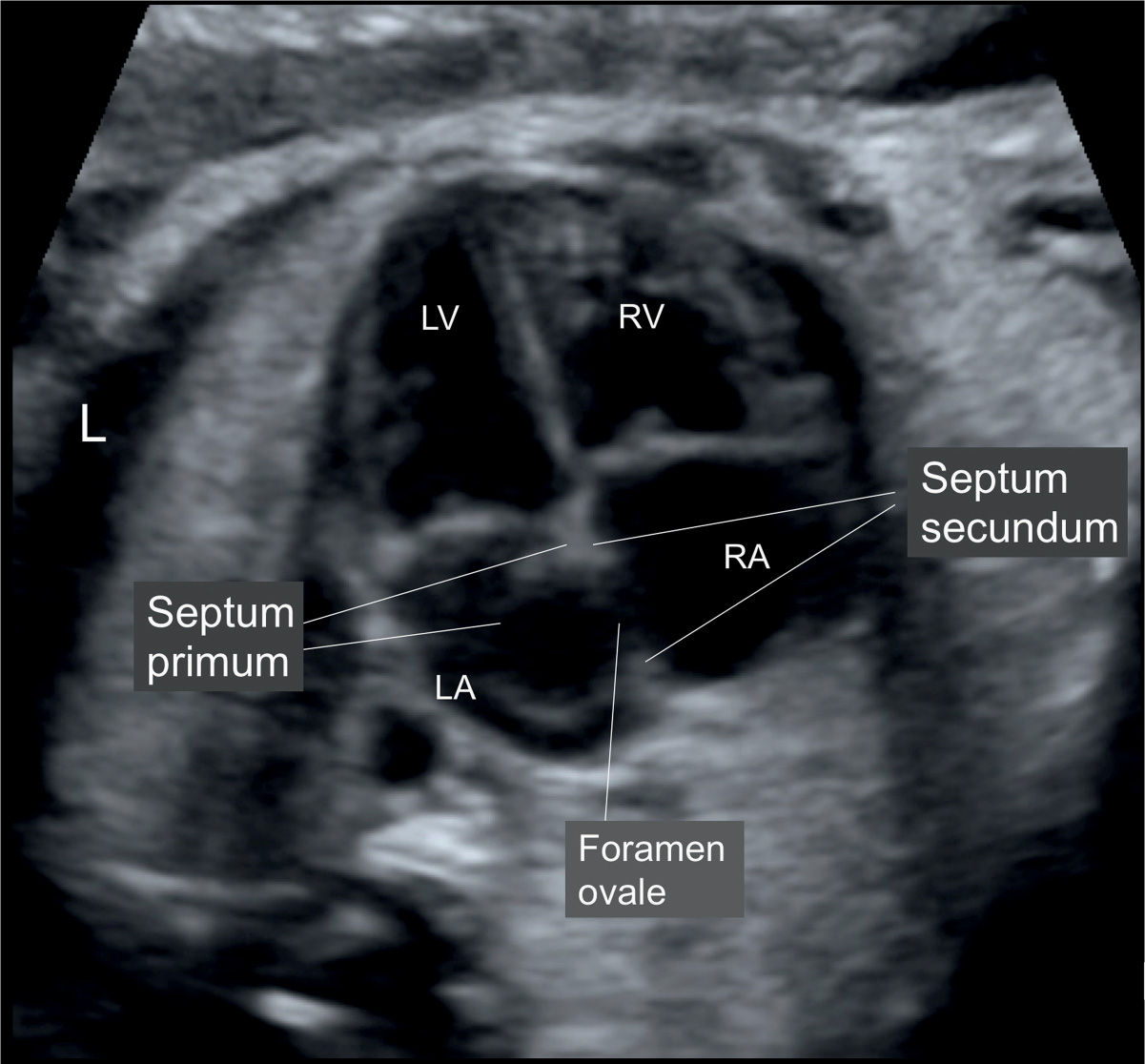 Figure 7.5: Apical four-chamber view of the fetal heart in gray scale. The apical view is preferred for the evaluation of the atria and interatrial septum. Note the clear visualization of the right (RA) and left (LA) atrium. The interatrial septum, noted between the RA and LA, is formed by the septum primum and secundum. The foramen ovale (FO) is an opening in the midportion of the septum secundum, and its flap is formed by the septum primum. L, left; RV, right ventricle; LV, left ventricle. (Compare with anatomic specimen in Figure 5.2.)

On occasions, the Eustachian valve can be imaged in a four-chamber view plane that is posterior to the optimal plane, where it can be mistaken for the flap of the foramen ovale. The coronary sinus, which delivers venous return from the heart, runs across the atrioventricular groove posteriorly and enters the right atrium inferiorly in proximity to the atrial septum (1) (see Chapter 10).

The Right and Left Ventricles

We encourage the use of the cine-loop function in the ultrasound equipment while imaging the atrioventricular valves (Fig. 7.8). Appearance and motion of valve leaflets during diastole and systole can thus be visualized more clearly.

The interventricular septum (septum) separates the right from left ventricle. The septum is wide at the apex of the heart, and thins out as it reaches the level of the atrioventricular valves (Fig. 7.7). This is related to the anatomic features of the septum, as it is muscular at its lower two-thirds and membranous at its upper one-third, at the junction of the atrioventricular and semilunar valves (see anatomic correlate in Fig. 5-12). Before 20 weeks of gestation, the thin membranous part of the septum is not optimally visualized by an apical four-chamber view (Fig. 7.9). This is primarily due to echo dropout, which may lead to a false-positive diagnosis of septal defects (Fig. 7.9). When a septal defect is suspected on apical views, confirmation should be obtained in lateral views, which allow for better visualization of the septum (Fig. 7.9). The presence of an echogenic line (T-line), at the level of the septal defect in apical views, may also help to confirm the diagnosis (see Chapter 18). A lateral four-chamber view should be used to measure the thickness of the septum (normal range between 2 and 4 mm) and measurement should be performed at the thickest portion of the septum. 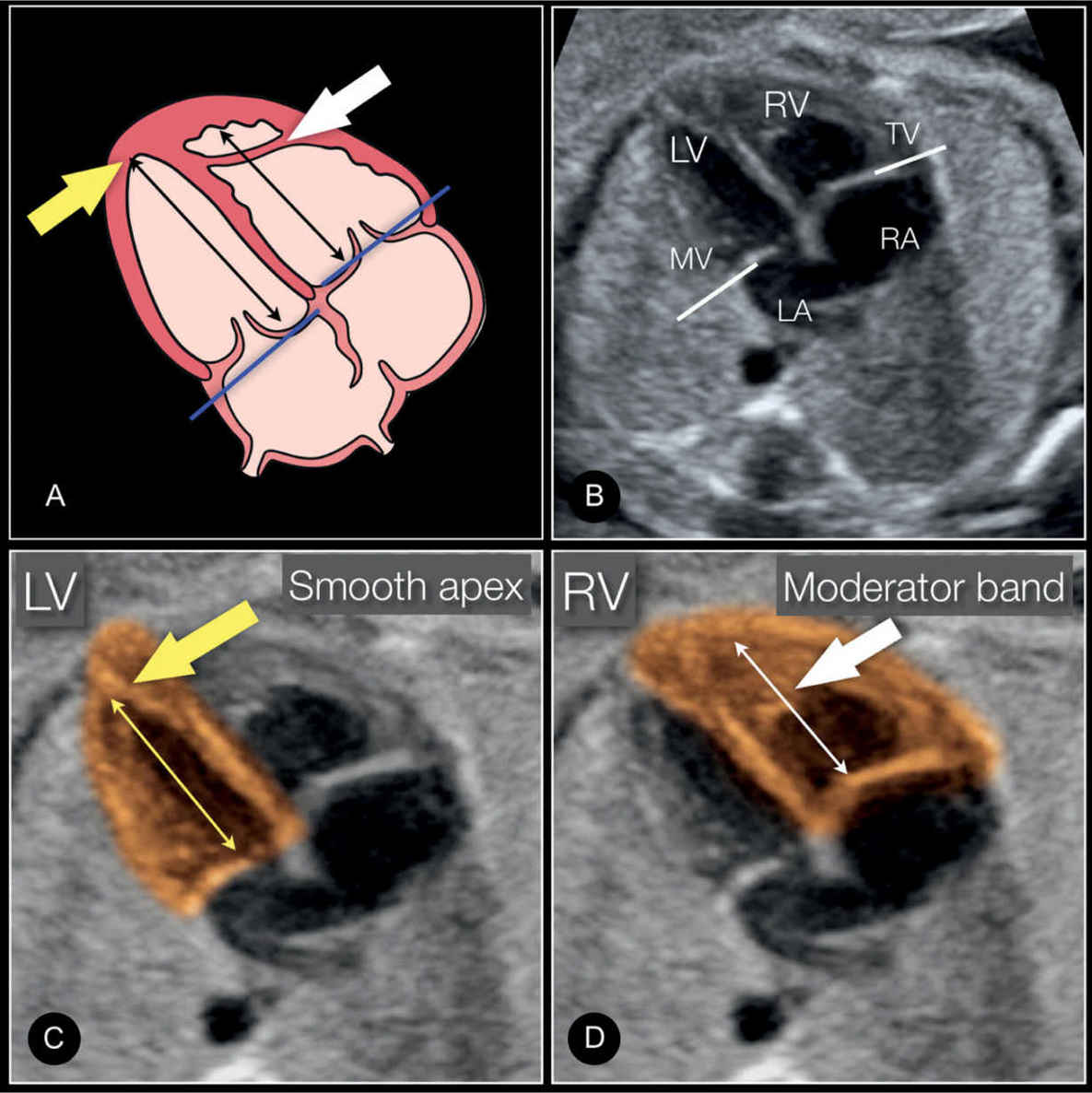 Figure 7.6: Schematic drawing (A) and apical four-chamber view (B) with a highlight of the left ventricle (LV) (C) and right ventricle (RV) (D) in a normal fetus, showing the differentiating features of the LV and RV. The LV is longer than the RV (double-sided arrows), is smooth, and forms the apex of the heart (yellow arrow). The RV is coarse and has the typical moderator band (white arrow) in its apex. The tricuspid valve (TV) is shown to insert more apically on the septum than the mitral valve (MV). See text for more details.