Small amounts of fetal blood cross the placenta and enter the maternal circulation during uncomplicated pregnancies and particularly at sensitizing events, such as delivery. If the fetus is ‘D rhesus positive’ and the mother is ‘D rhesus negative’, the mother will mount an immune response (sensitization), creating anti-D antibodies.

Immunity is permanent, and if the mother’s immune system is again exposed to the antigen (e.g. a subsequent pregnancy), large numbers of antibodies are rapidly created. They can cross the placenta and bind to fetal red blood cells, which are then destroyed in the fetal reticuloendothelial system (Fig. 22.2). This can cause haemolytic anaemia and ultimately death, and is called rhesus haemolytic disease. A similar immune response can be mounted against other red blood cell antigens: the most important antibodies are anti-c and anti-Kell (a non-rhesus antibody), particularly after blood transfusion. 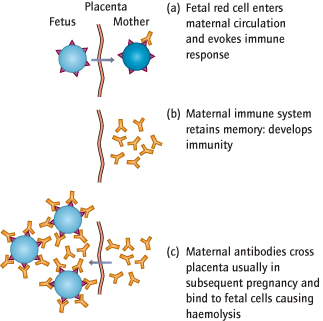 Vaginal bleeding <12 weeks, or if heavy

Production of maternal anti-D can be prevented by the administration of exogenous anti-D to the mother. This ‘mops up’ fetal red cells that have crossed the placenta, by binding to their antigens, thereby preventing recognition by the mother’s immune system. If both parents are known to be D rhesus negative, the fetus must also be rhesus negative also and therefore will be unaffected. However, anti-D is still usually given even if the partner is known to be rhesus negative because of the possibility of non-paternity, although this issue must be handled with care. Anti-D is pointless if maternal anti-D is already present, as sensitization has already occurred.

Anti-D (1500 IU) should be given to all women who are rhesus negative at 28 weeks: this alone will reduce the rate of isoimmunization in a first pregnancy from 1.5% to 0.2%. Anti-D is also given to such women within 72 h of any sensitizing event, although some benefit is gained within 10 days. These include a miscarriage or threatened miscarriage after 12 weeks, or before if the uterus is instrumented (e.g. ERPC [→ p.131]), termination of pregnancy and ectopic pregnancy. Anti-D is also given after in utero procedures such as amniocentesis [→ p.155] and after external cephalic version [→ p.228], fetal death or antepartum haemorrhage.