Palpable purpura on the lower limbs in a girl with HSP (courtesy Dr. Carola Durán) 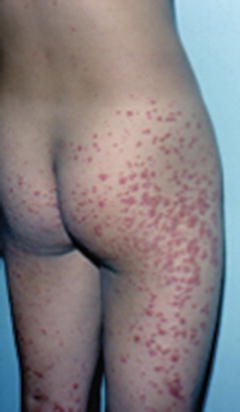 Purpuric papules on the thighs and buttocks in HSP (courtesy Dr. Carola Durán)

Systemic involvement is usually present. A self-limited arthritis of the knees and ankles can be seen in 60–80 % of cases and can be the presenting sign in up to 25 % of patients [1, 2]. Abdominal pain with fecal occult blood is the most characteristic gastrointestinal complaint, although more profuse GI bleeding may occur; other GI complications include intestinal perforation and intussusception [2, 3]. Kidneys may be affected in up to 60 % of cases [2], usually a delayed manifestation. Microscopic hematuria and proteinuria may evolve into nephrotic syndrome, acute nephritis, and rarely acute renal failure. Prognostic factors associated with kidney involvement include abdominal pain, decreased activity of factor XIII, and persistence of purpura for more than 1 month [3, 4]. Varied neurological symptoms such as headache, irritability, or seizures may indicate CNS involvement.
Laboratory analyses may show anemia, leukocytosis, and increased ESR; serum chemistry may reveal kidney or GI involvement. Urinalysis is mandatory to rule out hematuria and proteinuria. Coagulation studies are normal. Sometimes, elevated levels of IgA, IgA circulating immune complexes, IgA rheumatoid factor, and IgA antineutrophil cytoplasmic antibodies can be observed [3, 4]. Skin biopsy is recommended from recently appeared lesions and shows small vessel leukocytoclastic vasculitis. Late lesions may fail to reveal necrotizing vasculitis. Direct immunofluorescence (DIF) of very recent lesions demonstrates perivascular deposits of IgA, C3, and fibrinogen; such deposits may be lost after 48 h.

Other forms of small vessel vasculitis may mimic HSP. The IgA deposits (DIF) will differentiate HSP from other types of leukocytoclastic vasculitis. Diagnostic criteria have been developed, but their use has been debated [5]. Lupus erythematosus, Wegener disease, or cryoglobulinemia may also be considered in the differential. As stated earlier, acute hemorrhagic edema can be considered within the spectrum of HSP.