Although TA occurs more commonly in females, it has been reported in males [2–4]. It is found in both the adult and pediatric population. In the United States, it is primarily seen in individuals of African and Hispanic descent due to hairstyling practices, such as weaving, tight ponytails, tight braiding, “corn-rowing”, and hair straightening that cause excess tension on the hair. In 2007, Khumalo et al. [5] conducted a population-based study looking at the relationship between hairstyling practices and scalp diseases in 1,042 South African school-aged children, 574 (55 %) girls and 467 (45 %) boys. All cases of TA occurred only in girls, with a prevalence of 17.1 % in girls and an overall prevalence of 9.4 %. Of the girls with TA, 8 were noted to have natural hair and 90 had relaxed hair on exam. Two hundred and fifty-nine girls had a prior history of braids: 170 with braids on natural hair, 84 with braids on relaxed hair, and 5 with dreadlocks. The prevalence of TA in these groups was 22.9 %, 32.1 %, and 0 %, respectively. The difference between the first two groups was not significant. The authors did note a significant difference (p < 0.0001) in the prevalence of TA between the girls with natural hair on exam and a history of braids on natural hair: 5.2 % versus 22.9 %. However, use of relaxers confounded this difference. Thus, the authors concluded that TA is significantly associated with relaxer use, but the correlation with a history of braids is unclear [5].
TA has also been associated with hair rollers, backcombing, nylon brushes, tight scarves around the scalp, and headbands [6–11]. Eyelash extensions have been associated with TA of the eyelashes, which may result in permanent loss [12]. Of note, traction has been implicated in the pathogenesis of follicular degeneration syndrome as traction can produce irritation or injury that results in follicular degeneration [13, 14].

TA occurs as either acute or chronic hair loss. Acute TA is relatively uncommon and is a result of accidental or intentional forceful removal of the hair for which there is a clear history, such as a motor vehicle accident [11, 15]. Chronic TA is more commonly seen and has a gradual and predictable course. It is typically symmetrical; the exact pattern depends on the causative hairstyle. A thin strip of hair is often preserved at the distal edge due to hairs that are too short to be pulled back; this is known as the “fringe sign” [16]. Other clinical features that may be present include follicular and perifollicular papules, pustules, erythema, scale, broken hair shafts, and peripilar keratin casts, which are 3- to 7-mm yellow-white mobile cylinders on the hair shaft [1, 17–19]. Permanent scarring hair loss can occur as a result of prolonged traction.
TA can occur in a marginal or a nonmarginal pattern. In marginal TA, hair loss occurs along the margins of the scalp, characteristically at the temporal scalp and extending forward to involve the frontal and periauricular scalp (Fig. 15.1) [20, 21]. The temporal scalp is commonly involved due to constant contraction of facial muscles superimposed on the tension caused by tight hairstyles (e.g., braids or ponytails) [21, 22]. An ophiasiform pattern of hair loss can also occur [23, 24]. Marginal TA is commonly noted in African-American females. 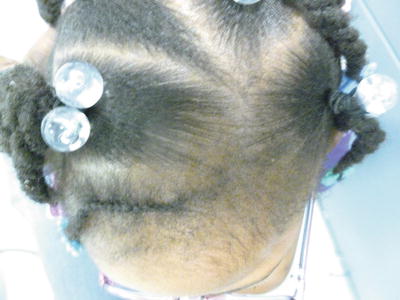 Notable tension from hairstyling is resulting in follicular prominence and hair loss along the hairline and parts in this 2-year-old African-American female (photo courtesy of Nanette B. Silverberg, MD)
Nonmarginal TA does not occur at the margins of the scalp. Chignon alopecia is a type of nonmarginal TA localized to the occipital scalp where the bun rests [25]. In “corn-row alopecia” severe hair loss occurs adjacent to where the hair is parted [21, 26]. Hair extensions or weaving may result in a nonmarginal TA in the crown area where the scalp hair and the extensions are attached [3, 11, 27]. Other potential causes include nurse caps that are pinned to the scalp and hair rollers [6, 28]. Marginal and nonmarginal TA are not mutually exclusive and can occur together [20].
The diagnosis of TA is based on a thorough history and physical exam, including a detailed history of hair care and styling practices. Blood tests are usually unnecessary. However, a biopsy may be helpful if the clinical presentation is questionable. In early TA, the histologic findings are similar to those found in trichotillomania but usually subtler. The total hair count is normal to slightly decreased; follicular damage is not prominent; and trichomalacia and pigment casts are rarely seen [29]. Subacute perifollicular inflammation with occasional parakeratosis may be present [21]. Traction on the hairs triggers a premature conversion of hairs into the telogen stage resulting in a reduced anagen to telogen ratio [11]. Advanced TA is characterized by reduced or absent hair follicles and perifollicular fibrosis that extends to the subcutaneous fat resulting in vertical tracts of scarring [25, 28]. In both early and late disease, the number of vellus hairs remains normal [29]. The epidermis may be unaffected or show slight hyperkeratosis with irregular acanthosis. Blood vessels and eccrine glands remain normal, but sebaceous glands may be decreased in density [21, 30]. Inflammation is typically not a prominent feature [11].

Other forms of alopecia, both scarring and nonscarring, are in the differential diagnoses. Alopecia areata is the most common misdiagnosis [24, 25]. Other differential diagnoses include trichotillomania, occipital pressure alopecia, circumscribed scleroderma, tinea capitis, and loose anagen syndrome. In advanced stages once there is scarring and permanent hair loss, TA can resemble any form of end-stage scarring alopecia. As individuals with androgenetic alopecia (AGA) are susceptible to developing TA, this diagnosis should always be considered [25, 31].

Successful treatment and prevention of permanent alopecia depend on early diagnosis. First and foremost, the discontinuation or reduction of traumatic hair care practices that exert excess traction on the hair should be advised. Individuals of African descent should be encouraged to try natural hairstyles. Topical antibiotics (e.g., clindamycin) or oral antibiotics (e.g., minocycline) may be needed if a coexistent folliculitis is present [21]. Steroids, topical (e.g., fluocinolone) or intralesional (e.g., kenalog 5 mg/cc), or minoxidil (2 %) may be helpful [11, 32–34]. In late-stage TA, surgical treatments and camouflaging techniques, such as hair pieces and wigs, may be the only viable alternatives. The surgical options include simple excision of the area of permanent alopecia, excision and scalp reduction with the implantation of an extender, excision followed by coverage with scalp flaps with or without the use of tissue expanders, and hair transplantation. Children can undergo surgical treatments for TA but often require general anesthesia for these procedures [35].
Only gold members can continue reading. Log In or Register to continue