The skin, the largest organ in the body, plays many roles as the major interface with the external environment.1-3 The outermost skin layer, the stratum corneum, prevents desiccation of a primarily aqueous body in a dry atmosphere. Extensive burns, drug-induced skin necrosis (toxic epidermal necrolysis), and other extensive blistering disorders, such as epidermolysis bullosa, represent situations in which the barrier is breached, leading to increased morbidity and mortality. In addition to providing a physical barrier to infection, the skin is an important component of the body’s immune system. Langerhans cells provide immune surveillance, presenting antigen that activates lymphocytes. When the immune function in skin is dysfunctional, as in atopic dermatitis, the risk of infection is increased.

The skin also serves as the interface with ultraviolet light. Within the epidermis, ultraviolet B light also provides the impetus for isomerization of provitamin D to vitamin D3, which is transported to the liver and then to the kidneys for sequential hydroxylations to form the active, 1,25-dihydroxyvitamin D3. Exposure of normal keratinocytes to ultraviolet radiation causes mutations in tumor suppressor genes, while epidermal melanin impedes transmission of ultraviolet rays. As a result, patients with albinism who have a significant decrease in epidermal melanin have an increased risk of developing ultraviolet-induced malignancies, particularly basal cell carcinomas and squamous cell carcinomas. In patients with xeroderma pigmentosum, the repair system after ultraviolet DNA damage is defective, leading to the dramatically increased risk of cutaneous sun-induced tumors in these patients as well (see Chapter 360).

The skin’s role in thermoregulation is primarily mediated by evaporation of sweat, secreted in response to autonomic stimuli. Thermoregulation is impaired in genetic disorders of eccrine gland morphogenesis, such as hypohidrotic ectodermal dysplasia, or where eccrine ducts are obstructed by a thickened stratum corneum, as in congenital ichthyosiform erythroderma or severe atopic dermatitis. Premature infants cannot sweat well, and even term infants sweat less than adults. During heat stress, the failure to sweat can lead to excessive body temperature, vasodilatation, and resultant hypovolemic shock. In patients with cystic fibrosis, the normally hypotonic sweat becomes hypertonic, and thermal stress therefore can induce dehydration.

The skin provides an important afferent limb to the nervous system in the interface with the external world through sensory perceptions of touch, pressure, itch, and pain. Skin, hair, and nails are highly visible body components, and their appearance is important for self-image and psychosocial development. Although birthmarks and acquired skin and appendageal disorders can be disfiguring, the attitude of the patient and the environment contribute greatly to the perception and resultant effect of disfigurement.

The skin consists of epidermis, dermal-epidermal junction, and dermis. The most superficial skin layer, the epidermis, is composed predominantly of ectodermally derived keratinocytes and also contains neural crest–derived melanocytes and bone marrow–derived Langerhans cells. The epidermis is divided from the underlying dermis by the dermal-epidermal junction, a complex structure of particular importance in several acquired and genetic blistering diseases. The dermis provides the collagenous support for the epidermis and contains a network of blood vessels, lymphatics, and nerves. Below the dermis lies the subcutis, which is composed primarily of subcutaneous fat, the predominant systemic energy store. This area is also traversed by blood vessels and nerves.

The epidermis is a stratified, squamous epithelium in which keratin tonofilaments are the predominant protein, providing structural integrity (Fig. 356-1). The basal layer of the epidermis consists of a single layer of proliferating cuboidal cells. The stem cells of the epidermis are confined to the basal layer, although the immediately suprabasal layers may also contain proliferating (transiently amplifying) cells. Above the basal layer, keratinocytes differentiate, become more flattened in appearance, and form the spinous (or Malpighian) layer, a term that derives from the microscopic appearance of their interconnections through desmosomal plaques. The number of spinous cell layers is variable, depending on body site. Increased thickening of this compartment occurs in a variety of dermatoses and is called acanthosis. The granular cell layer, which constitutes the outer 1 to 3 nucleated cell layers, is characterized by the presence of basophilic keratohyalin granules containing the histidine-rich protein profilaggrin, a precursor of the important skin protein filaggrin.

Although not seen by light microscopy, spinous and granular cells also contain an abundance of lamellar bodies, an organelle enriched in lipids and lysosomal enzymes. 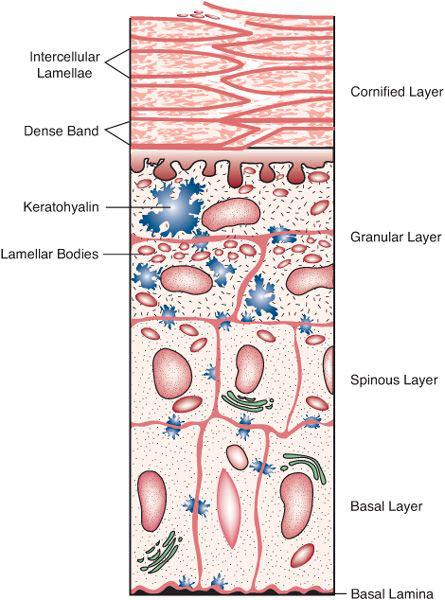 Above the granular cell layer, the stratum corneum is composed of multiple layers of flattened, anucleate, lipid-depleted corneocytes enclosed in a highly cross-linked protein shell (the cornified envelope) and embedded in an extracellular matrix of multiple broad lamellae enriched in lipids. These hydrophobic lipids, secreted by lamellar bodies into the intercellular space at the interface between the granular layer and the stratum corneum, form multiple membrane bilayers that impede passage of water and other substances across the stratum corneum. These lipids contribute to the important barrier function of the skin and provide protection from external pathogens. Normally, an epidermal cell moves from the basal cell layer to the granular cell layer in about 2 weeks, with an additional 2 weeks required to exfoliate from the surface. In some hyperproliferative diseases, such as psoriasis, these transit times may be reduced to 2 to 4 days each.

The neural crest–derived melanocytes are interspersed among basal keratinocytes, where their dendrites interact with neighboring epidermal cells. Melanocytes synthesize the melanin granules that are transferred by these dendrites to epidermal cells. Darkly pigmented skin does not have more melanocytes, but melanin granules are larger, more heavily melanized, and persistent into higher epidermal layers. Also, the bone marrow–derived Langerhans cells are dendritic and interspersed among epidermal cells but in a suprabasal distribution.

Langerhans cells participate in antigen recognition and processing and interact with keratinocytes and T lymphocytes in immunemediated reactions. Proliferation of these cells is seen in Langerhans cell histiocytosis.

The dermal-epidermal junction, or basement membrane zone, consists of (1) the plasma membrane of the basal epidermal cell with its specialized attachment plaques, the hemidesmosomes, which are composed of bullous pemphigoid antigens, laminin 332 chains, integrins α6 and β4, and plectin; (2) the lamina lucida, which contains laminin 1; (3) the lamina densa, consisting mostly of type IV collagen and laminin 1; and (4) anchoring fibrils, collections of type VII collagen that anchor the basement membrane to the upper dermis. Other constituents of the basement membrane zone include fibronectin, type V collagen, entactin/nidogen, and proteoglycans. Mutations or autoimmune reactivity against basement membrane proteins can lead to genetic or autoimmune blistering diseases.

The dermis, which both supports the epidermis and provides the bulk and physical resilience of the skin, is a relatively acellular, fibrous tissue. Its main cellular constituent is the fibroblast, which secretes types I and III collagen, elastin, and other extracellular matrix proteins. It is divided into the superficial or papillary dermis, which immediately underlies the epidermis and fills the dermal papillae, and the subjacent reticular dermis, which has a coarser pattern of collagen fibers. The dermis is traversed by a network of cutaneous nerves, blood vessels, and lymphatics that transport impulses, nutrients, and immunocompetent cells to and from the skin. Perivascular mast cells and tissue macrophages are also dermal residents. The subcutaneous tissue is composed of fat cells or adipocytes surrounded by fibrous septi containing blood vessels and nerves.

Epidermal appendages are specialized structures derived from epidermis. Hair follicles arise by follicular keratinocyte growth into the dermis during the eighth to ninth week of fetal life. Hairs are classified into three types: lanugo, vellus, and terminal. Lanugo hairs are normally present only in fetal life, and most are shed in utero during the first portion of the last trimester. Widespread lanugo at birth is therefore an indicator of significant prematurity. Terminal hairs are the coarse, longer hairs found predominantly on scalp, eyebrows, and, after puberty, on axillae and pubis. Vellus hairs are the finer, shorter, less pigmented hairs found on other portions of hair-bearing skin. Hair follicles undergo a cycle of several years of growth (anagen phase), followed by a brief involution phase (catagen phase), and a 3-month shedding (telogen phase). Normally, hair follicle growth is asynchronous, and the duration of the anagen phase, and hence hair length, is genetically determined. Stressful life events, however, such as illness or giving birth, may abruptly shunt follicles into the resting stage, producing 2 to 4 months later a marked shedding of hair (telogen effluvium). Hair growth is androgen-dependent to a varying extent, depending on body site, regulated by the conversion within the hair follicle of testosterone to its active metabolite, 5α-dehydrotestosterone via the enzyme 5α-reductase. 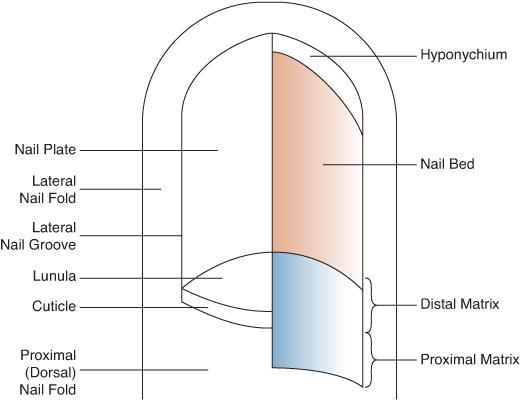