Jane Morton and Ruth A. Lawrence

The World Health Organization, the American Academy of Pediatrics, and all major health organizations recommend that all infants should be exclusively breast-fed for the first 6 months of life, and breast-feeding should be continued while adding weaning foods for the next 6 months and then for as long as mother and child desire (unless there is a medical contraindication).1,2 Human milk has evolved for the human infant and is ideally structured to meet the nutritional needs for infant growth and development. It provides a variety of bioactive components that protect from infection and promote normal development.3 These include hormones (oxytocin, thyroid-stimulating hormone, growth hormone, thyroxine, cortisol insulin), growth factors (epidermal growth factor, nerve growth factors, somatomedin-C, insulinlike growth factors), neuropeptides (somatostatin, neurotensin, vasoactive peptides), inflammatory and immunomodulatory agents (cytokines), and pheromones, which stimulate suckling behavior.4-6 The relative composition of milk and its bioactive agents differ from one mother to the next depending on her past experience, her genetic makeup, her diet, and the gestational age of her infant. The composition of the mother’s milk changes over time following birth and over the course of the feeding.

The beneficial effects of providing species-specific nutrition in the early months may extend far past the time of weaning and have been described as “nutritional programming.” Human milk significantly influences growth, neurocognitive development,7 and cardiovascular disease.6-9 Advantages of breast milk also are observed in the preterm or small-for-gestational-age infants, especially in the prevention of necrotizing enterocolitis,10 but supplementation with specific nutrients may be required to assure optimal growth and neurocognitive development.11

The concept of nutritional programming implies that a stimulus or insult during a critical or sensitive period of development can have long-term or lifetime effects. A beneficial effect of human milk on long-term development of a healthful childhood and adult intestinal microbiome has been proposed but is not yet established.12 Colostrum, with its host of bioactive factors, is the infant’s first immunization and likely begins the interaction between breast milk and intestinal mucosal factors that control the development of the intestinal microbiome. Factors known to interfere with the normal establishment of a beneficial flora include delayed feedings, antibiotics, cesarian section delivery, and formula feeding.9,12 Human milk supports the prevalence of beneficial microflora (bifidobacteria and lactobacillus) and potentially inhibits the establishment of pathogenic microbes.6 Exclusive breast-feeding for at least 4 months is also associated with a reduction in atopic disease, indicating that later immunologic responses are possibly programmed during infancy.13

Breast-feeding appears to establish a more healthful feeding pattern throughout life that influences growth parameters. The physiologic weight loss in the first several days and subsequent growth pattern of the breast-fed infant differs from that of formula-fed infants.14 Some studies suggest that breast-fed infants may have lower rates of obesity compared to formula-fed infants.15,16 This finding has led to the establishment of new international growth charts based on the growth of normal, healthy breast-fed children in 7 countries (with varying socioeconomic levels) by the World Health Organization (see Chapter 28).17

Absolute contraindications to breast-feeding in the western world include maternal human immunodeficiency virus and human T-cell lymphotrophic virus types 1 and 2.14 The risks and benefits of breast-feeding with maternal human immunodeficiency virus is controversial in the underdeveloped world (see Chapter 315). Herpes simplex is a risk if there is a lesion on the breast and only until the lesion is dried. Active tuberculosis is a risk until the mother has been adequately treated for at least 2 weeks. The mycobacterium organism does not enter the milk, so the mother can express the milk, and it can then be fed to the infant by another care provider until the mother can safely be in contact with her infant.14

Maternal medications are occasionally a contraindication, but most drugs appear in the milk at levels only 1% of the maternal dose. An updated list of these risks is available online at toxnet.nlm.nih.gov/cgi-bin/sis/htmlgen?LACT and in multiple printed references.14,18-20 Drugs of abuse (cocaine, PCP, marijuana) are contraindications. Some antimetabolites with long half-lives are contraindications. Therapeutic doses, but not diagnostic doses, of radiopharmaceuticals are contraindicated. Other medications are considered on an individual basis according to the risk of the drug compared to the benefit of breast-feeding for the infant. If use of a drug that confers risk is temporary, the mother can express breast milk and discard the milk until the drug has cleared.

Unfortunately, following multiple generations where breast-feeding has not been promoted, there is a lack of support systems to help mothers adopt breast-feeding. Commonly, mothers are aware of the importance of breast-feeding but expect it to “come naturally,” and they feel frustrated by the lack of role models and experienced individuals to guide them when they encounter difficulties. Until recently, breast-feeding management gained little attention in most health professional curriculums (nursing and medical), further discouraging efforts to promote it. However, over the past decade, a major effort has been made to improve education of mothers and health care professionals. A teaching video to aid health care professionals introduce breast-feeding to mothers is available at newborns.stanford.edu/Breastfeeding/FifteenMinuteHelper.html.

International studies show that hospitals that implement the World Health Organization’s “10 Steps to Successful Breastfeeding” improve breast-feeding rates.2 These evidence-based interventions are endorsed by the American Academy of Pediatrics.1 The 5 steps that specifically refer to the mother are (1) initiate breast-feeding within the first hour after birth, (2) allow 24-hour rooming in, (3) provide no supplementation unless medically indicated, (4) encourage on-demand breast-feeding that follows the infant’s cues, and (5) avoid pacifiers and bottles until breast-feeding is well established. A model hospital breast-feeding policy developed by the American Academy of Pediatrics supports evidence-based lactation management for mothers of well and sick newborns.

Understanding the physiology of lactation provides the basic knowledge to allow practical management and troubleshooting when problems occur with breast-feeding.14,23 The let-down reflex, or ejection reflex, is a complex function that depends on hormones, nerves, and glands and is critical to successful lactation (see Figure 24-1). Suckling stimulates the proprioceptors in the areola and nipple. Afferent fibers transmit this impulse to the hypothalamus, which stimulates the posterior pituitary to release oxytocin. Oxytocin is carried via the bloodstream to breasts and uterus. Oxytocin stimulates myoepithelial (smooth muscle) cells in the breasts to contract and eject milk from alveolus. Prolactin stimulates milk production in the alveoli and is secreted by the anterior pituitary gland in response to suckling. Emptying the breast stimulates increased milk production. Stress such as pain and anxiety can inhibit let-down reflex. The touch, sight, or cry of the infant can stimulate the release of oxytocin but not prolactin. The establishment of a responsive supply-and-demand system depends on the frequent and effective removal of colostrum and milk from the first day and continued exclusive use of breastfeeding for infant nutrition. 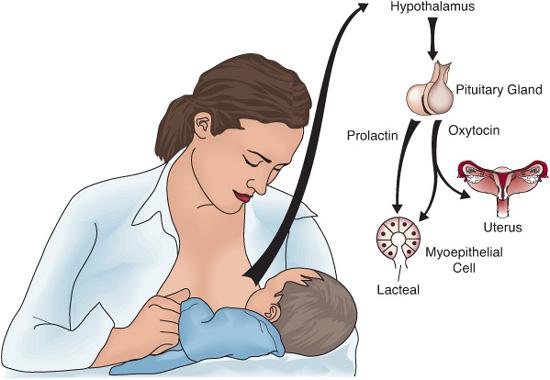