The etiology of malnutrition can be primary, as when the otherwise healthy individual’s needs for protein, energy, or both are not met by an adequate diet, or secondary, as a result of disease states that may lead to suboptimal intake, inadequate nutrient absorption or use, and/or increased requirements because of nutrient losses or increased energy expenditure. Protein-energy malnutrition is the most important nutritional disease in developing countries and one of the leading causes of morbidity and mortality in childhood worldwide.1,2 In the Western world primary malnutrition continues to occur with alarming frequency because of neglect or poverty. Secondary malnutrition exists as a result of chronic or acute illness.

In primary protein-energy malnutrition, calorie inadequacies generally are linked to conditions of war, social disruption, poverty, ignorance, infectious diseases, and food distribution inequalities. Therefore, socioeconomic, political, and other environmental deprivations can be considered to be the most global cause for childhood starvation with its deleterious effects on growth and development.

In the clinical setting, acute and/or chronic illness may lead to malnutrition and, if prolonged, result in failure to thrive. Although the etiology of malnutrition can be traced to an underlying pathology (ie, increased energy needs secondary to respiratory distress, fever, wound healing, or a malabsorptive state), the common pathway to a malnourished state is still a net deficiency of the nutrients required for an individual. Although dietary energy and protein deficiencies typically occur in concert, one may predominate, resulting in either kwashiorkor (primarily a protein-deficient state) or marasmus (primarily an energy-deficient state). Marasmic kwashiorkor also can occur and is the combination of chronic energy deprivation with a superimposed chronic or acute protein deficit. In both pathologic states, apathy, indifference, fatigue, and irritability are common.

There are several different criteria using weight and height to classify malnutrition, and all must be judiciously applied. The most useful and widely employed are the Waterlow classification2 and the Gomez criteria,3 which are used to distinguish a chronically malnourished or “stunted” child from an acutely malnourished or “wasted” child. An expected (or predicted) weight-for-height index is employed. This assessment allows classification of the degree of stunting (ie, decreased height-for-age, an indicator of chronic malnutrition) and wasting (ie, decreased weight-for-height, an indicator of acute malnutrition). The severity of an individual’s wasting and/or stunting is calculated as a percentage of the reference median value. The 50th percentile weight for that age and height-for-age are taken as the denominator, and the actual weight or height as the numerator. Gomez criteria assess the degree of malnutrition based on weight-for-age. The actual weight is compared to the median value (50th percentile for age) for the patient’s actual age. This criterion aids in the recognition of acute malnutrition. The Waterlow revised grading index for height-for-age and weight-for-height and the Gomez criteria can be found in Table 29.1.3,4

It must be emphasized that this system of classification is useful, but it is inadequate for the complete assessment of the individual child. Chronic stunting and insufficient weight gain will result in a weight-for-height percentile that is within normal limits despite findings of weight-for-age and height-for-age are both below the fifth percentile. This should not be interpreted as nutritionally adequate; rather, it reveals that the patient’s failure to thrive is chronic.

Marasmus is characterized by generalized muscular wasting and absence of subcutaneous fat. Marasmic children appear to be emaciated and very cachectic (Fig. 29-1A). They suffer severe wasting (ie, reduced weight-height ratio) and often have linear growth stunting as well. Their skin is dry, without turgor, and appears loose and wrinkled because of the loss of subcutaneous fat. The classic appearance of a sunken or “wizened” face, resembling that of an elderly person, results from the loss of the temporal and buccal fat pads. Buccal fat pads are among the last subcutaneous adipose depots to be mobilized in starvation, and their loss reflects the duration and severity of the malnutrition. The child’s hair is thin, sparse, and brittle and lacks its normal sheen. Adaptive metabolic features such as hypothermia, slow pulse rate, and hypotension usually are present, and hypoglycemia can occur because of fasting for prolonged periods of time.

Kwashiorkor is caused by an insufficient intake of protein that is of adequate biological value and often is associated with deficient energy intake. The term kwashiorkor comes from an African dialect on the Gold Coast meaning “the disease of the deposed baby when the next one is born.” The onset of kwashiorkor typically tends to appear in young children during the weaning and postweaning phases. In areas where kwashiorkor is endemic, the main dietary staples often are a carbohydrate source that is low in protein content and quality (white rice, cassava, yams). A diet of this nature may produce a fat-appearing child and, as such, has been referred to in some parts of the world as a “sugar baby.” As opposed to children with nonedematous severe malnutrition (marasmus) who maintain body protein breakdown to maintain plasma protein levels, those with kwashiorkor have slower body protein catabolism, resulting in decreased availability of amino acids for the synthesis of plasma proteins involved in nutrient transport and the acute phase response to infection.3 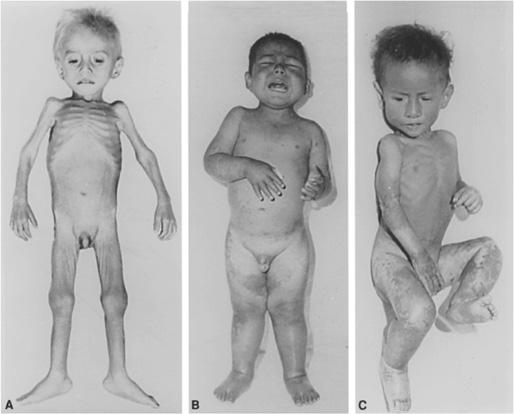 The predominant feature of relative protein malnutrition is soft, pitting, painless edema, usually in the feet and legs but extending to the face and upper extremities in severe cases (Fig. 29-1B). Most affected children have dermatoses, including hyperkeratosis and dyspigmentation secondary to desquamation of the epidermis. Hair texture is dry, brittle, and straight, and its color changes to red or yellowish-gray. During alternating periods of adequate and poor protein intake, the hair may reflect a pattern of alternating depigmentation. This is known as the flag sign: normal hair changes to depigmented hair, correlating with nutritional state. Height may be normal or stunted, depending on the duration of the protein deprivation. Although weight loss usually is appreciated, failure to gain weight appropriately often is masked by the edema. These patients typically present with pale, cold peripheral extremities and have hepatomegaly secondary to fatty infiltration. The abdomen is frequently protruding. T-cell lymphocytes and cell-mediated immune responses are blunted, making the child more susceptible to acute and chronic infections. A higher mortality rate is seen with kwashiorkor than with marasmus.

The marasmic kwashiorkor form of edematous protein-energy malnutrition is characterized by clinical features of both types of malnutrition. It occurs following prolonged protein malnutrition, when a loss of subcutaneous tissue, muscle mass, and adipose stores are also prominent. The main features are the edema of kwashiorkor, with or without skin lesions, and the cachexia of marasmus (Fig. 29-1C). Marasmus, kwashiorkor, and marasmic kwashiorkor classically are described in the underdeveloped parts of the world. These specific illnesses are often influenced by local diets and intercurrent infections. Therefore, there are apparent differences from one region to another. In North America and western Europe, problems of primary malnutrition are less common than are those of secondary malnutrition in children with other serious medical problems.

MANAGEMENT OF THE MALNOURISHED CHILD

Management of the malnourished child initially requires assessment of the severity of malnutrition (see Chapter 28 and Table 29.1). In cases of less severe malnutrition, supplementation with improved food sources, vitamins, and minerals generally leads to improvement. Repeated monitoring of progress is required to assure a response to therapy with continued health. If these measures are not successful, other underlying conditions that may lead to malnutrition should be considered. Children with mild to moderate malnutrition with weight loss greater than 5% are at risk for refeeding syndrome and require more careful management and monitoring. Those with severe malnutrition (weight-for-length < 70% and/or presence of edema) are at greatest risk and should be managed as a medical emergency.

Acute severe malnutrition is encountered most frequently in the developing world but may also be seen in the developed world following cases of child neglect or abuse and in adolescents with severe anorexia nervosa. This degree of malnutrition results in a high mortality rate, even when optimally managed, because of the profound physiological and metabolic changes that occur, known as reductive adaptation. During prolonged fasting, the liver decreases its rate of gluconeogenesis as the brain switches to ketone bodies as its energy source. This preserves muscle protein. Metabolic rate decreases with associated reductions in the activity of the Na/K pump, increased intracellular Na, and reduced intracellular K. Cardiac output, stroke volume, glomerular filtration rate, and renal blood flow are all reduced with severe malnutrition. Even though serum concentrations that may remain normal, intracellular concentrations of phosphorus, manganese, and potassium are depleted. Other commonly associated deficiencies include B vitamins, especially thiamine and vitamin A. Overly aggressive resuscitation efforts with intravenous fluids and/or nutrient therapy can cause congestive heart failure, electrolyte instability (refeeding syndrome), and precipitate death.

Refeeding syndrome describes the potentially fatal shifts in fluids and electrolytes that may occur in malnourished patients with nutritional repletion by either enteral or parenteral routes.6,7 The true incidence of refeeding syndrome is unknown, but it is a condition that should be considered in all patients who may be at risk of the condition (Table 29.2) and prevented. The cardinal sign of this syndrome is hypophosphatemia. During refeeding, intake of glucose leads to insulin secretion, which stimulates the synthesis of glycogen, fat, and protein. This is accompanied by the uptake of potassium, magnesium, and phosphate into cells, which often results in hypophosphatemia, hypokalemia, and hypomagnesaemia. Hypophosphatemia results in widespread disruptions of almost every cellular process. Severe hypokalemia can cause cardiac arrhythmias and cardiac arrest. Hypomagnesaemia can lead to hypocalcemia with cardiac dysfunction, weakness, and tremor. Excessive administration of glucose can also lead to excess carbon dioxide production and respiratory failure. Thiamine deficiency, which is common with severe malnutrition, can be associated with Wernicke encephalopathy if glucose is administered acutely (confusion, ophthalmoplegia, ataxia, hypothermia, and coma).