This group encompasses AISs coursing with recurrent fevers and erythema. They present clinically with recurrent episodes of fever and erythematous swellings that can range from discrete urticarial wheals to large erythematous macules; the lesions can occur daily or at variable intervals from days to weeks. Several clinical manifestations of systemic inflammation accompany the eruption.

FMF is the paradigm of the periodic fever syndromes. It is an autosomal recessive (AR) disorder due to mutations in the gene MEFV (MEditerranean FeVer), which encodes a protein named pyrin or marenostrin [2, 3]. Pyrin is a main regulatory component of the NLRP3 inflammasome, a large protein complex that takes part in inflammation signaling pathways such as the IL-1β pathway [4].

FMF patients present episodic attacks of fever that typically last less than 72 h, abdominal pain, pleurisy, mono or oligoarticular arthritis, and/or arthralgias [5]. Attacks are self-limited and between them the patient remains asymptomatic. The interval between attacks is variable. Exercise, emotional stress, exposure to extreme temperatures, and hormonal changes can trigger the attacks [5]. Amyloidosis is a severe complication that could appear in untreated patients. Erysipeloid-like lesions, which appear in 15–20 % of children, are the characteristic cutaneous manifestation of FMF [6–8]. They usually appear in the lower extremities as well-circumscribed edematous and erythematous plaques. Histopathology shows a predominantly neutrophilic infiltrate with nuclear dust [9]. Purpuric lesions on the face, trunk, and extremities have also been reported in children.

Colchicine is the treatment of choice; it reduces the frequency, intensity, and the duration of the attacks [10]. In patients who do not respond to colchicine, it is important to verify the compliance with therapy. Intravenous colchicine could be tried as some of these not-responders do respond to this regime. There are isolated reported cases of truly colchicine-resistant patients that responded to thalidomide, to anti-TNFα agents such as etanercept and infliximab, and to the recombinant IL-1 receptor antagonist anakinra [11, 12].

Cryopyrin-associated periodic syndromes (CAPS), also called cryopyrinopathies, are a group of three overlapping autosomal dominant syndromes, which are due to self-activating mutations in the NLRP3 gene (also called CIAS1). NLRP3 product is the protein called cryopyrin, which is part of a multiprotein inflammasome complex (the NLRP3 inflammasome), which in response to certain stimuli activates the caspase 1 cascade that leads to production of pro-inflammatory cytokines, mainly IL-1β and IL-18 [13]. 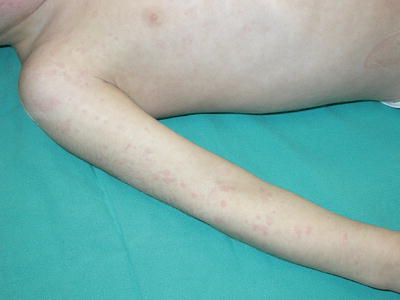 Anakinra, the IL-1 receptor antagonist, has shown dramatic improvement of CAPS, although not all patients respond equally [19]. Rilonacept and canakinumab can achieve complete and sustained responses in almost all cases of CAPS [19].

The deficiencies of the interleukin-1-receptor antagonist syndrome (DIRA) and of interleukin-36-receptor antagonist syndrome (DITRA) are the paradigm of pustular eruptions associated with periodic fever. Other diseases in this group include pyogenic arthritis, pyoderma, acne (PAPA) syndrome, and Majeed syndrome. In all of them, the main cutaneous lesions are pustular eruptions, which show marked neutrophil infiltration with prominent intraepidermal neutrophil accumulations.
Only gold members can continue reading. Log In or Register to continue