Female urethroplasty can be categorized by the surgical approach, nature of any needed tissue graft, and whether to perform concomitant bladder outlet procedure. The urethra is approached either dorsally or ventrally. A dorsal approach is perhaps less familiar to many urologists and care must be taken to avoid injury to the crura and body of the clitoris. A dorsal approach may also facilitate later anti-incontinence procedures, prevent sacculation of the reconstructed urethra, and minimize risk of urethrovaginal fistula or hypospadias [18]. A ventral approach, conversely, is familiar to urologists experienced in many of the transvaginal anti-incontinence procedures and allows for easier visualization of the urethra to the level of the bladder neck.
Graft tissue may be either a local rotational flap, pedicle flap, or free flap harvested from vaginal, labial, or oral mucosa. Free or pedicle flaps may minimize distortion of local tissue compared to rotational flaps, but are also associated with harvest site morbidity including paresthesia, anesthesia, and altered cosmesis.
The decision to perform a concomitant anti-incontinence procedure should be based on preoperative evidence of stress incontinence or, in the opinion of some experts, in the presence of contrast entering the urethra to the level of the stricture during fluoroscopic imaging while performing a Valsalva maneuver and cough [1]. Many experts advocate dorsal, as opposed to ventral, urethroplasty techniques to facilitate concomitant or delayed placement of ventral urethral sling [18].
Given the infrequent occurrence of urethral strictures and more infrequent reports of their repair in the literature, there is a paucity of data precluding a recommendation of one approach or graft over another.

Short strictures located primarily on the ventral aspect of the urethral lumen may be incised longitudinally with transverse closure consistent with the Heineke–Mikulicz principle. Long or circumferential dense scar may be recalcitrant to this technique:

In dorsal lithotomy position, prepare the vagina with betadine, drape, and facilitate exposure with a Lone Star or similar retractor.
2.

Place a foley catheter or, under cystoscopic guidance, intubate urethra and stricture with a guide wire.
3.

Transversely incise the periurethral fascia to expose the underlying urethra.
5.

Incise the urethra longitudinally through the stricture.
6.

Repair urethra with transverse closure using absorbable suture, such as 4-0 poliglecaprone, in an interrupted fashion.
8.

Close periurethral fascia with interrupted absorbable suture, such as 3-0 polyglactin.
9.

Advance the anterior vaginal wall flap beyond the underlying suture line of the periurethral fascia.
10.

Close vaginal wall with running, locking 3-0 polyglactin.
Excision and end-to-end anastomosis is not often used due to the risk of urethral ischemia distal to the excision. Rovner reported that this approach was useful in treating complex urethral diverticulae [19].

Vaginal inlay flaps have been separately reported by several investigators [20, 21]:

After intubating the urethra with a catheter, wire, or guide, an anterior vaginal wall flap is created with an inverted-U incision, the apex of which is at the urethral meatus (Fig. 13.2a–d).

The ventral aspect of the urethra is incised in the midline from the meatus, through the stricture, to a point of normal caliber urethra proximal to the stricture.
3.

The dorsal aspect of the urethra may need to be incised in the midline to facilitate approximation of the flap.
4.

The apex of the vaginal wall flap is then approximated with absorbable suture, such as 4-0 poliglecaprone, to the proximal extent of the urethral incision.
5.

A large caliber urethral catheter is then placed.
6.

The vaginal wall flap is approximated with running, locking absorbable suture to the urethra along either side of the flap until the urethra has been reconstructed distally to the urethral meatus.

The free labia minora skin flap is an alternative to the vaginal inlay flap and is well described by Rehder et al. [22]:

The vagina is prepped and draped in the usual surgical fashion.
2. 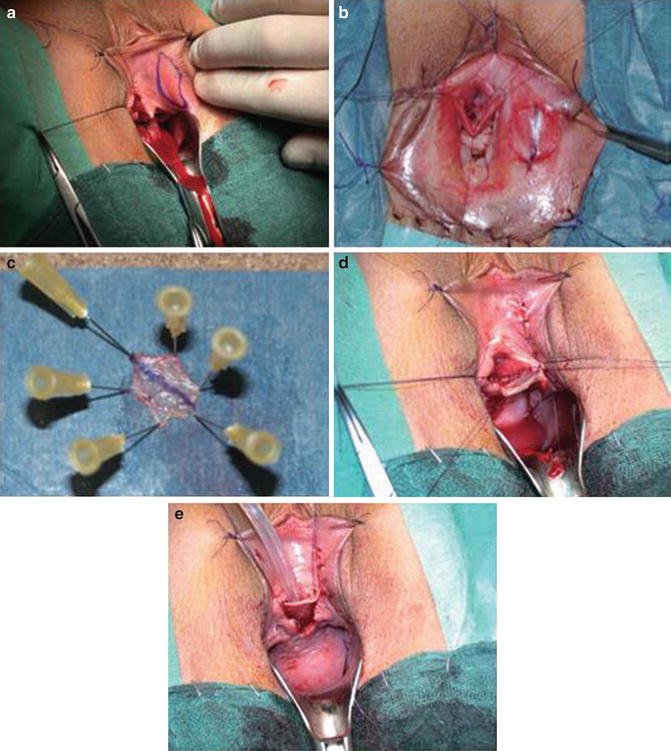 (a–e) (a) After exposure of urethra and incision through the region of stenosis, an elliptical graft is marked. (b) The graft is excised and the donor site repaired. (c) The graft. (d) The graft is sewn to the urethra with interrupted absorbable suture. (e) The anterior vaginal wall defect after graft placement (a–e: Used with permission from Rehder P, Glodny B, Pichler R et al. Dorsal urethroplasty with labia minora skin graft for female urethral strictures. BJU Int 2010 Oct;106(8):1211-4)
3.

The urethra, intubated with urethral sound, catheter, or wire, is incised in the midline to level proximal to the stricture.
4.

Donor tissue site is selected from medial aspect of the labia minora.
5.

An elliptical graft is sharply harvested, its size corresponding to the length and width of the urethral defect.
6.

The graft donor site is repaired with interrupted absorbable suture.
7.

The graft is anastamosed to the urethra with running, locking absorbable 4-0 polyglyconate or poliglecaprone over a catheter.
8.

Vaginal wall is then closed with running, locking absorbable suture.
Consideration should be given to placing a Martius flap harvested through either a separate vulvar incision or from the lateral aspect of the anterior vaginal wall flap incision.

Pedicle Flap from the Labia Minora

This procedure is similar to the free labial graft, except that the donor tissue is isolated on a pedicle and tunneled under the vulvovaginal wall to the site of urethral dissection (Fig. 13.4a–d). The remainder of the urethroplasty is similarly performed [23].

(a–d) (a) Graft site is marked. (b) The graft is harvested taking care to preserve the pedical. (c, d) The graft is tunneled and affixed to the urethra
Only gold members can continue reading. Log In or Register to continue