Newborn infants are classified according to birth weight as small, average, or large for gestational age (Table 47-1).1,2 Small-for-gestational-age (SGA) infants are a heterogeneous group of infants who are smaller than normal at birth because of genetic or constitutional conditions, diseases, or nutrient insufficiency. SGA infants have a birth weight less than the 10th percentile of a population-specific birth weight versus gestational age. Broader definitions include infants whose weight percentile is less than that for length and head circumference (eg, weight at 25th percentile but length and head circumference at 75th percentile). In this case, the weight-to-length ratio—or the ponderal index = (weight, g)/(length, cm)3—is less than normal, indicating that growth rates of visceral organs, adipose tissue, and skeletal muscle, the principal determinants of weight, were less than that of length. A low weight-to-length ratio occurs most commonly in fetuses with late gestation nutritional deficiency, usually a result of placental insufficiency.

Intrauterine growth restriction (IUGR) is defined as a rate of fetal growth that is less than normal for the population and for the growth potential of a specific infant.2 IUGR infants therefore can be small for gestational age or simply smaller than they could have been but still with weights and other anthropometric indices within the normal range.4 The latter point is important because adverse outcomes of growth restriction are due to the processes that produce slower growth and the fetal adaptations to these, not just whether the infant is less than the 10th percentile. Nearly any aberration of biological activity in the placenta and/or fetus can lead to fetal growth failure.5 Moderately and severely IUGR infants tend to have asymmetric growth restriction; that is, body growth restriction is greater than brain growth restriction. The degree of asymmetry varies considerably depending on the duration and severity of the growth inhibition. Constitutionally small infants (from normal but small mothers who have small uteruses) tend to have more symmetrically restricted brain and body growth. Asymmetric and symmetric growth restriction therefore represent the 2 extreme patterns of abnormally slow fetal growth rates. 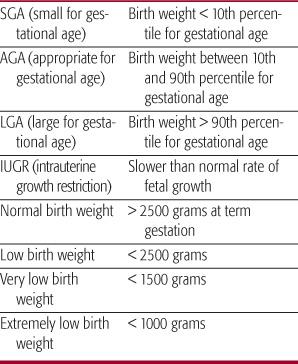 Fetal growth is regulated by maternal, placental, and fetal factors, representing a mix of genetic mechanisms and environmental influences through which fetal genetic growth potential is expressed and modulated.1,4,6 Maternal genotype is more important than fetal genotype in the overall regulation of fetal growth. However, the paternal genotype is essential for trophoblast development, which secondarily regulates fetal growth by the provision of nutrients. The major maternal factors that regulate fetal growth, which vary among populations and among individuals, include maternal size (height and prepregnancy weight) and maternal weight gain during pregnancy. Maternal size primarily contributes to fetal growth by regulating the size of the uterus, particularly the endometrial surface area, which allows the paternal insulinlike growth factor (IGF)-II gene to express its dominant regulation of placental growth over the maternal IGF-II receptor gene.5

Normal variations in maternal nutrition have relatively little impact on fetal growth, because changes in maternal nutrition, unless extreme and prolonged, do not markedly alter maternal plasma concentrations of nutrient substrates or the rate of uterine blood flow, the principal determinants of nutrient substrate delivery and transport to the fetus by the placenta. The placental trophoblast surface area is the primary regulator of fetal growth via its nutrient transport capacity and its interaction with maternal (uterine) and fetal (umbilical) circulations. The trophoblast regulates nutrient transport through its membrane transporters, with a large variety of energy-dependent or active transporter system proteins for amino acids (which thus are dependent on maternal oxygenation and placental blood flow) and facilitative transporters for glucose and fatty acids (which enhance transport that is dependent on the maternal-fetal concentration gradient). At more advanced stages of placental development, placental production of growth factors and growth-regulating hormones (human placental lactogen or hPL, and placental growth hormone, or PGH) leads to significant autocrine regulation of placental growth and placental regulation of fetal growth processes.

In the fetus, nutrient supply is the primary regulator of fetal growth, dependent most on amino acids for protein synthesis and secondarily on energy from glucose oxidation in fetal tissues.1,4,5,7 Mineral supply (calcium and phosphorous) is essential to promote bone structure. In addition, nutrient-stimulated secretion of insulin and insulinlike growth factors promote fetal growth via their signal transduction effects on protein synthesis. Insulin acts additively with glucose supply to promote fetal glucose utilization and oxidation as well as storage in glycogen and lipid.

Intrinsic abnormalities that limit fetal growth usually begin early in fetal life, whereas the onset of extrinsic adverse factors, such as undernutrition or hypoxia from placental insufficiency, develop at variable times during later gestation.1,4,5 Abnormalities that limit the growth of both the fetal brain and body include chromosomal anomalies (particularly trisomy conditions), congenital infections (eg, toxoplasmosis, rubella, and cytomegalovirus), dwarf syndromes, some inborn errors of metabolism, and some drugs (eg, maternal smoking and excessive alcohol consumption). Most other cases of fetal growth restriction are the result of a small or poorly functioning placenta. Small placentas can result from natural conditions such as a small mother with a small uterus (the principal form of “maternal constraint” by which maternal size directly contributes to uterine and thus placental size), multiple gestation, or abnormal conditions such as uterine structural abnormalities (fibroids), abnormal placental vasculature (eg, aberrant cord vessel insertions, thrombosis, vasculitis, infarcts, avascular villi), infections, chronic partial abruption with or without placenta previa, or preeclampsia. Table 47-2 lists common maternal conditions associated with intrauterine growth restriction and Table 47-3 lists those conditions in the placenta that lead to it.

EPIDEMIOLOGY AND INTERPRETATION OF GROWTH CURVES

Cross-sectional growth curves from anthropometric measurements in populations of infants born at different gestational ages demonstrate whether an infant’s birth weight is within the normal range for a given gestational age and thus whether that infant’s in utero growth was greater or less than normal (see Figure 41-3). Each curve is based on local populations with variable composition of maternal age, parity, socioeconomic status, race, ethnic background, body size and body mass index, health, pregnancy-related problems, and nutrition as well as the number of fetuses per mother, the number of infants included in the study, and the methods and accuracy of measurements of body size and gestational age.8 Estimating gestational age has considerable error, derived from variability in dating conception, the physical features of maturation in the infant, and interobserver assessments of an infant’s developmental stage.