. The Patient with Single Ventricle

The Patient with Single Ventricle

In practice the concept of “single ventricle” expands beyond the strict anatomic definition, and refers to all congenital heart lesions that share a single ventricle physiology, regardless of the underlying structural variant.3,4 This expanded functional definition includes all those lesions in which the patient lacks a second ventricle that can independently support the pulmonary circulation. In most such lesions, components of a second ventricle exist.

Thus, the single ventricle from a physiologic perspective includes patients with

• unbalanced complete atrioventricular (AV) canal (a common AV valve is more aligned to one ventricle than the other, typically associated with asymmetry in the development of the two ventricular chambers)

Overall, patients with single ventricle preoperatively tend to have complete mixing of pulmonary and systemic venous returns within the heart (Fig. 498-2). Blood leaving the heart goes both to the pulmonary and systemic circulations; therefore, the aortic and pulmonary oxygen saturations are usually equal but sometimes streaming of blood within the heart causes differences in aortic and pulmonary oxygen saturations. The single ventricle is volume overloaded, as it supplies both circulations. This parallel circulation is relatively inefficient because some previously oxygenated blood from the lungs returns to the pulmonary circulation and some systemic venous blood is shunted into the systemic arterial circulation (Fig. 498-2, eFig. 498.4

The balance between the systemic and the pulmonary circulations depends on multiple factors, including anatomic obstruction as well as relative vascular resistances and perfusion pressure. Ideally, the relationship between the pulmonary and systemic blood flows (Qp/Qs) should be kept at least at 1:1, which typically is achieved in the presence of complete mixing when the systemic arterial oxygen saturation is around 75%, in the absence of lung disease and with a normal cardiac output. Some cardiologists recommend maintaining aortic oxygen saturation over 85% with a QP/QS of 1.5 to 2, to improve growth potential. 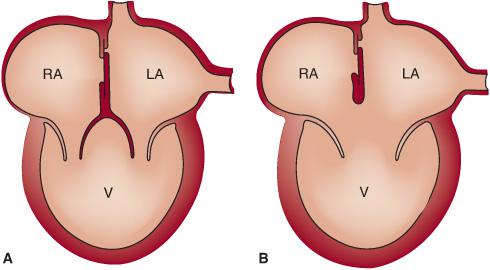 • Pulmonary or subpulmonary stenosis or atresia: This may lead to a marked decrease in systemic arterial oxygen saturation, as the ductus arteriosus closes over the first hours of life. The degree of cyanosis is determined by the severity of the obstruction. In patients with severe pulmonary stenosis or pulmonary atresia, severe cyanosis can occur rapidly, and is a life-threatening event. In that situation, the infant is considered to be “ductal dependent.” Prostaglandin E1 is started immediately to reverse the problem. The typical hemodynamic status once the PDA is opened is illustrated in eFigure 498.6

• Systemic (aortic) obstruction: This can be below the aortic valve (subaortic stenosis), at the valve, in the aortic arch (hypoplasia or aortic arch interruption), or in the aortic isthmus between the left subclavian artery and ductus arteriosus (coarctation of the aorta). When the obstruction is critical, newborns are ductal dependent, meaning that patency of the ductus arteriosus is necessary to maintain adequate systemic blood flow.

• Atrioventricular obstruction: With a stenotic or atretic atrioventricular valve, restriction of flow between the two atria can be very deleterious. In the hypoplastic left heart syndrome, for example, restriction at the foramen ovale causes severe left atrial and pulmonary venous hypertension.

The vast majority of the patients with single ventricle variants develop symptoms in the newborn period and early infancy. Patients with ductal dependent lesions need emergency intervention. Those with increased pulmonary blood flow may show signs of heart failure as the pulmonary vascular resistance drops, whereas those with decreased pulmonary blood flow have severe cyanosis. If not treated, death occurs in infancy in more than 50% of patients,12-14 more than half occurring during the neonatal period.

Patients with single ventricle have variable physical examinations, depending on the presence or absence of associated pathology, particularly pulmonary or systemic obstruction.15 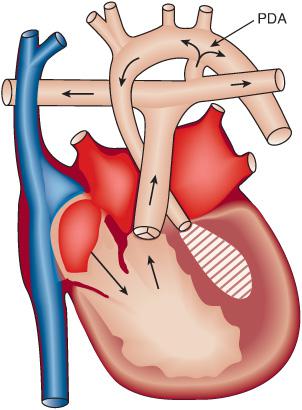