Snoring is an inspiratory noise produced by vibration of the soft tissues of the oropharyngeal walls that occurs because of changes in the configuration and properties of the upper airway during sleep (Figures 26-1 and 26-2). Snoring is the most common, and sometimes, the only presenting symptom of sleep-disordered breathing (SDB). A spectrum of SDB exists and is viewed on a continuum of severity based on the degree of upper airway narrowing, arousals, and gas exchange abnormalities. The spectrum ranges from primary snoring to the upper airway resistance syndrome (UARS) to obstructive sleep apnea syndrome (OSAS). 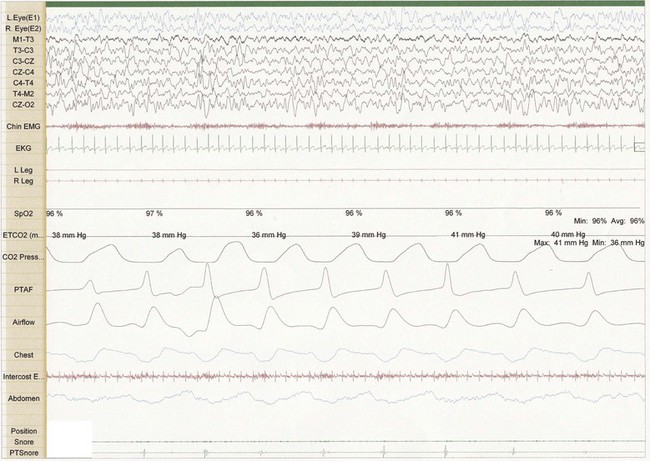 Figure 26-1 Thirty-second epoch in N3 sleep from a 4-year-old girl referred for evaluation of snoring. Note the presence of snore artifact present in the Chin EMG. This epoch demonstrates primary snoring without classic changes on EEG suggestive of an arousal. 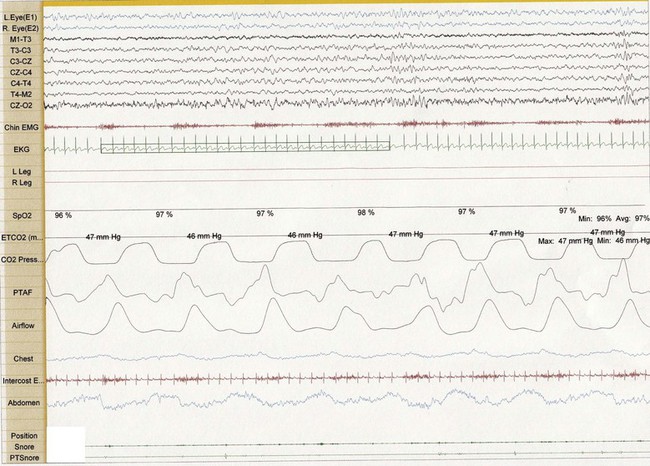 Figure 26-2 Thirty-second epoch in N2 sleep from the same 4-year-old girl as in Figure 26-1. Snore artifact is again noted in the Chin EMG. However, theta bursts are associated with the snoring, suggestive of arousal and upper airway resistance.

Primary snoring (PS) is traditionally defined as nightly or frequent snoring that is not associated with hypoxemia, hypercapnia, sleep disruption or daytime symptoms.1 For the child with habitual snoring, it is essential to discriminate PS from OSAS so that appropriate treatment can be provided. By definition, the diagnosis of PS is made by polysomnographic criteria with objective measurement of sleep and respiratory function, as clinical history alone cannot differentiate PS from OSAS.2

In a study of 83 snoring children referred to a tertiary pediatric sleep clinic, parents completed a standardized, nurse-administered questionnaire that asked questions regarding snoring frequency, observed apnea, struggling to breathe, and other daytime and nighttime symptoms. Children then underwent nocturnal polysomnography to assess for sleep-disordered breathing. Although there were several differences in symptom frequencies between the children with PS and those with OSAS, both single and multiple questions showed poor sensitivity and specificity in differentiating PS and OSAS. Other studies demonstrate a similar inability of clinical history to differentiate PS from OSAS.3–8

Although PS is a polysomnographic diagnosis, the diagnosis of PS suggests that it is a benign condition, without adverse sleep-related or daytime sequelae since there are no aberrations in gas exchange abnormalities or sleep architecture. In other words, children with primary snoring have no disruption of normal sleep patterns, no cardiorespiratory compromise, and no neuropsychological morbidity. Since snoring affects approximately 10% of children, the presence of snoring without consequence is likely to occur. However, the original descriptions of PS occurred prior to description of the upper airway resistance syndrome (UARS) as a distinct clinical entity. Although the consensus on the definition of UARS is still lacking, interpretation of the literature can be difficult, since some children previously characterized as having PS may have actually had UARS.

UARS is defined as partial upper airway obstruction that is not associated with gas exchange abnormalities but is accompanied by increased respiratory effort (initially measured by changes in intrathoracic pressure via esophageal manometry) terminated by electroencephalographic arousal and responds positively to treatment in the same manner as OSAS.9 Snoring occurs in most affected individuals, but physiologic findings of UARS have been noted in patients without snoring, particularly in those who have had palatal surgery for upper airway obstruction. UARS is associated with increased upper airway collapsibility during sleep.10 Guilleminault and colleagues reported the clinical and polysomnographic characteristics of UARS in 25 children who were referred for snoring, excessive daytime somnolence, and behavioral problems.11 They demonstrated marked difference in the referred group compared to 25 healthy control children. Subsequently, numerous studies have demonstrated these polysomnographic findings of UARS in adults with daytime somnolence. Daytime somnolence in adults with UARS is significantly improved with nasal continuous positive airway pressure therapy, as objectively measured by the multiple sleep latency test.12

In adults, excessive daytime somnolence has a number of significant sequelae, including an increased risk of motor vehicle and work-related accidents and impaired mood. Hypertension is also frequently seen in adults with UARS. Children identified as having UARS have a variety of daytime symptoms, including symptoms of attention deficit hyperactivity disorder and academic problems. Most studies of snoring have not defined or described UARS as a distinct clinical entity and the true prevalence of UARS is unknown.9 However, studies now suggest significant neurocognitive abnormalities in children with habitual snoring occur, including attention deficit hyperactivity disorder, academic problems and behavior problems.13–15 Children with polysomnographically confirmed PS may demonstrate reduced neurocognitive capabilities, particularly in the domains of attention, memory and intelligence,16 and decreased performance in several measures of language and visuospatial ability.17 Available data, however, do not allow clear separation between patients with UARS and those with OSAS.

Although sleep physiologists often view sleep-disordered breathing as a spectrum with primary snoring being the mildest and OSAS the most severe form, no studies demonstrate a clear relationship between the degree of sleep-disordered breathing and symptoms or physiologic sequelae. Furthermore, although the diagnosis of primary snoring has traditionally been made on the basis of polysomnographic findings alone, available evidence suggests the absence of daytime somnolence should be an additional diagnostic criterion. In addition, children with primary snoring may demonstrate daytime symptoms in the form of habitual mouth breathing or a dry mouth, symptoms that might reduce quality of life.18,19

A number of epidemiological studies from diverse geographic locations have been published describing the prevalence of snoring in children. Most of these have used parental report by way of either questionnaire or interview format. Most have not included objective measurements of respiration during sleep, or they have included such measures on only a subset of children felt to be at high risk for OSAS. Additionally, there is no universally accepted, clear definition of snoring. Thus, the prevalence of the condition may differ based on varying interpretations of the term ‘snoring’ across cultures.9

A summary of representative epidemiological studies of snoring in children is presented in Table 26.1. A recent meta-analysis by Lumeng and Chervin suggests the overall prevalence, as reported by parents, is 7.45%,9 contrasting the 40% frequency of regular snoring in adults. The same authors reported that prevalence of habitual snoring ranges from a minimum of 2.4% in Turkey to a maximum of 34.5% in Italy. Within the same meta-analysis, the prevalence of OSAS is 0.1% to 13%. The study presenting the prevalence of OSAS as 13% is a significant outlier, with the diagnosis of OSAS based on oxygen desaturation index rather than standard measures. Excluding the 13%, the prevalence of OSAS ranges from 0.1% to 5.7%. None of these epidemiological studies has attempted to distinguish UARS from PS. Rosen20 studied 326 otherwise healthy children with snoring. Fifty-nine percent of children had OSAS, 25% had PS, 6% had UARS and 10% had no snoring. It is notable that 28% of the children in the study were obese. Racial and ethnic differences also contribute to varying prevalence of snoring in a given population.7

Epidemiology of Snoring in Children 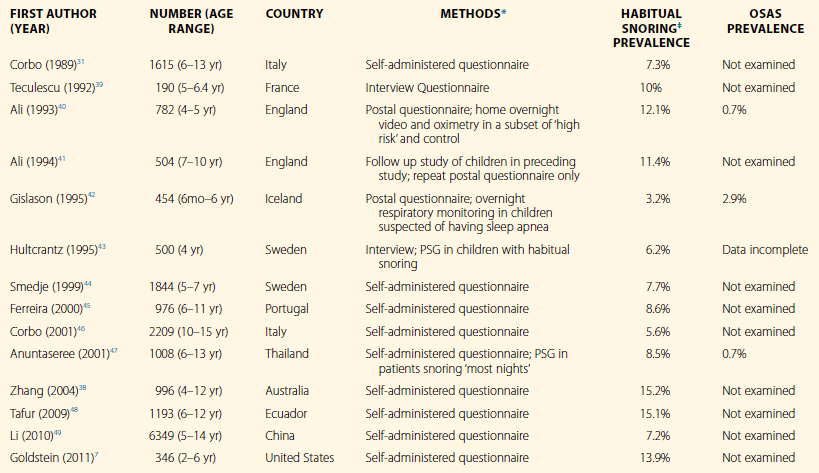 *All questionnaire and interview data were obtained from parents.

‡Habitual snoring is defined as frequent or nightly snoring, or snoring at least 3 nights per week, in the absence of upper respiratory infection.

Limited data are available regarding the natural history of primary snoring in children. Marcus and co-workers repeated polysomnography in 20 children 1 to 3 years after the initial diagnosis of PS; none had undergone airway surgery.21 All of these children had persistent snoring; in 20% snoring had increased, and in 70% there had been no change. Overall, there was no change in apnea index, oxyhemoglobin saturation, or peak end-tidal Pco2. However, two children had mild OSAS on repeat testing. The authors concluded that most children with PS do not progress to having OSAS, and those who do progress have only mild OSAS. Daytime symptoms in persistently snoring children were not reported.

Topol and Brooks studied nine children with primary snoring 3 years after initial polysomnographic diagnosis of PS; a control group of nine age-matched, non-snoring subjects was studied for comparison.22 As in the study by Marcus and colleagues, there was no overall change in respiratory parameters between the first and second polysomnogram; one snoring subject had significant worsening of the respiratory disturbance index. Interestingly, the control group had significantly better sleep efficiency and fewer brief arousals than the snoring group, which suggests that some of the children with PS may actually have been affected by UARS. Supporting the notion that PS may affect sleep architecture, O’Brien and colleagues recently demonstrated that children with PS exhibited a lower percentage of rapid eye movement (REM) sleep.17

Urschitz and colleagues presented similar findings from a large-scale questionnaire-based study of 1144 preschool children in Germany who were followed over a 1-year period.19 Ten percent of the children in this particular study demonstrated habitual snoring. Forty-nine percent of respondents continued to snore after 1 year. Predictors of long-term habitual snoring included decreased maternal education, the presence of a smoker in the household, loud snoring and surgical intervention for snoring since the initial survey.

While most children with primary snoring demonstrate resolution of their symptoms, Gozal and Pope demonstrated that a ‘learning debt’ may develop in children who snore during early childhood.15 In this large survey-based study, children in the bottom quartile of their seventh- or eighth-grade class were more likely to have snored during early childhood (OR 2.79, confidence interval: 1.88–4.15) and required a tonsillectomy for snoring as compared to the top-performing quartile members of their class. The authors suggested that children who experienced sleep-disordered breathing during a period traditionally associated with major brain growth and substantial acquisition of cognitive and intellectual capabilities may in part undermine their capacity for future academic achievement. These findings are consistent with the principle, suggested by Topol and Brooks, that some children may be experiencing UARS or that PS may have more significant consequences than originally appreciated.

Along with the potential long-term neurologic effects of PS, cardiovascular disturbances may be associated with PS. Initial conflicting studies regarding blood pressure changes in primary snoring exist. Kwok et al. demonstrated significantly increased systolic, diastolic and mean blood pressure in 30 children with PS as compared to age-, sex- and body-size-matched healthy controls.23 The TuCASA Study, a community-based sample of 239 white and Hispanic preadolescent children, demonstrated an association between sleep-disordered breathing, as diagnosed by unattended home polysomnography, and elevated blood pressure.24 Kaditis et al.25 and Amin et al.26 demonstrated no association between sleep-disordered breathing and blood pressure. However, each of these studies had design limitations.

Li and colleagues27 evaluated 190 children aged 6 to 13 years via overnight attended polysomnography and ambulatory blood pressure monitoring. Systolic blood pressure, diastolic blood pressure and mean arterial pressure were significantly increased in snoring subjects with PS as compared to healthy controls. As the severity of SDB increased, blood pressure abnormalities worsened. Particularly notable was the increase in nocturnal diastolic blood pressure in children with PS, which the authors attributed to an increase in sympathetic tone, similar to what is seen in OSAS. The authors conclude by stating that PS should no longer be considered entirely benign. Furthermore, there are now data to suggest that growth hormone secretion is impaired in children with PS,28 illustrating a point made by Guilleminault and Lee: ‘chronic regular snoring always has had a health impact when we have investigated a child appropriately.’29