LMs have also been categorized according to histologic appearance, cyst size, and anatomical relationship to the mylohyoid muscle [7, 8] (Type 1 and 2, see Table 28.2).
Table 28.2

The lymphatic system develops at week 5 of gestation as endothelial outgrowths from the venous system. These outgrowths then develop into six lymphatic sacs that develop into the lymphatic system in a process of “sprouting” and branching. By the 9th week, the right and left thoracic ducts then connect with the venous system again at the junction of the internal jugular and subclavian veins. Although, the molecular mechanism underlying the formation of LMs remain unclear, it is thought to be the result of lymphatic dysmorphogenesis [9, 10].

The majority of LMs are thought to form from parts of the lymph sac that fail to establish connections with the main lymphatic system or venous channels. Theories of LM development include:
1.

Failure of the lymphatic system to adequately separate or connect to the venous system, giving rise to cyst formation and lymphatic accumulation.
2.

Anomalous budding or “sprouting” of lymphatic structures from the cardinal vein. This theory of “centrifugal” development, hypothesizes that lymphatic endothelium derives from venous endothelium and undergoes centrifugal sprouting to the periphery, and through the expression of factors like vascular endothelial growth factor receptor 3 (VEGFR-3) and prospero homeobox protein (Prox-1) develops into lymphatics [11]. Conditions that result in the inappropriate expression of lymphatic-specific molecules may cause or contribute to embryologic LM development. Further understanding of the possible influence of molecular markers on the development and growth of LMs may allow the development of lymphatic-specific therapeutic strategies that alter the clinical course of patients with LM [9–13].

In contrast to vascular tumors (hemangiomas), LMs generally have normal levels of endothelial turnover. Histologic evaluations of LMs show no evidence of cellular proliferation, but rather a progressive dilatation of vessels of abnormal structure.
LMs are composed of vascular spaces filled with eosinophilic and protein-rich fluid. Multiple dilated lymphatic channels are lined by a single layer of flattened quiescent endothelium that lies on a thin single laminar basement membrane (Fig. 28.2a). The fibrovascular vessel walls are of variable thickness containing both smooth and striated muscle elements. Nodular clusters of lymphocytes are commonly seen within the cystic structure. Hemorrhage within the cystic spaces is also common, which may indicate recent trauma or spontaneous intralesional bleeding. 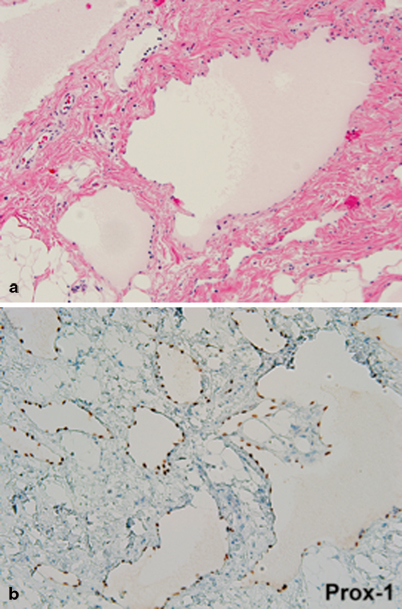 By definition, LMs are present at birth. Almost all LMs have presenting symptoms within the first 2 years of life. LMs grow commensurately with the child, with symptoms generally determined by the size and location of the malformation and to the perturbation of the adjacent tissues. Sudden enlargement may be seen secondary to infection or trauma, which may cause intralesional bleeding. LMs have also been reported as enlarging during increased hormonal stages, such as puberty [3]. LMs do not typically spontaneously regress, however, there have been reports of spontaneous regression following infection [7, 14].

Posterior cervical lesions that arise in the perinatal period have been associated with Turner’s syndrome, as well as other syndromes such as Down’s syndrome [15]. In these situations, there is an associated high prenatal mortality rate secondary to hydrops and diffuse lymphedema. Therefore, amniocentesis with chromosomal analysis and genetic counseling is recommended. Lymphatic malformations that present after birth are generally not associated with chromosomal abnormalities .

Antenatal diagnosis of LM can be made as early as 10–16 weeks gestation. The rate of antenatal detection has increased along with the increased widespread complementary use of prenatal fetal ultrasound (US) and fetal magnetic resonance imaging (MRI) [16] (Fig. 28.3). 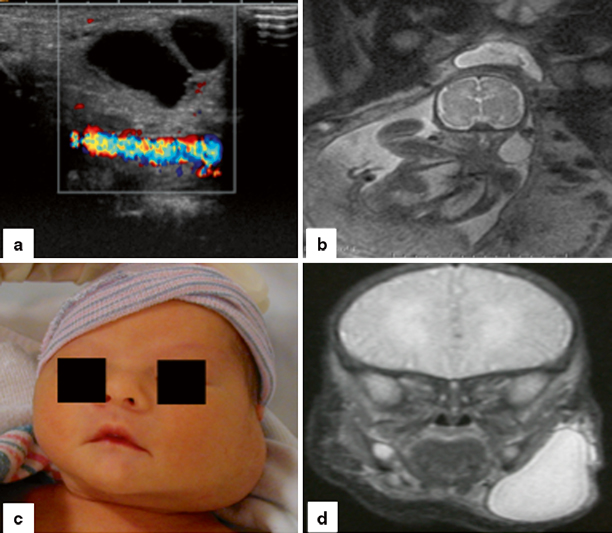 Prenatal imaging of LM. a Prenatal US performed at 24 weeks gestation, showing a cystic lesion next to the carotid artery, consistent with an LM. b Fetal MRI at 24 weeks gestation of the same patient in a, showing the left cystic neck lesion. c The patient at delivery at 38 weeks, left neck swelling is visible. d Postnatal coronal MRI showing cystic left neck swelling
The prenatal diagnosis of a large cervicofacial LM can have significant clinical implications, as it may be associated with significant airway obstruction, influencing the type, timing, and place of delivery [17, 18] (Fig. 28.4). Large cervicofacial LMs may require immediate airway intervention at the time of delivery. Such deliveries should be carefully planned at a tertiary referral center with a multidisciplinary team, including obstetrics, maternal fetal medicine, otolaryngology, pediatric surgery, neonatal medicine, and both obstetric and pediatric anesthesia. In some cases an ex-utero intrapartum treatment (EXIT) procedure may be required. 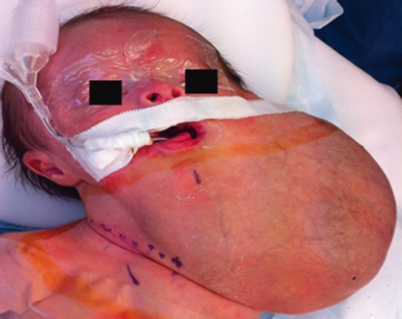 EXIT Procedure. Newborn infant with a large, left cervicofacial LM, with associated airway compression. This patient was delivered via an EXIT procedure and was intubated by direct laryngoscopy on placental circulation

In most cases, the diagnosis of an LM can be made by correlating a complete clinical history and physical examination. Key parts of the patient’s history include:
1.

Age at which the lesion was initially noticed.
2.

Acute changes in the size of the lesion related to upper respiratory tract infections, trauma, and hormonal changes.
Salient features on physical examination include the color, temperature, compressibility, pulsatility, and configuration of the lesion, as well as its relationship to surrounding anatomic structures. LMs are typically soft and cystic. Transillumination may identify cystic lesions, although this is not helpful if hemorrhage has occurred into the cysts [19].
Microcystic lesions are commonly found above the level of the mylohyoid muscle, and involve the oral cavity, cheek, tongue, lip, supraglottis, floor of mouth, and parotid gland. Intraoral LMs are nearly always of the mixed or microcystic classification . These lesions are poorly defined and infiltrate into surrounding tissue, obscuring muscle and fatty planes. Tiny vesicles, which represent small lymph-filled cysts and macroscopically resemble fish eggs, may be present, indicating superficial dermal involvement. These vesicles, may develop a purple color secondary to intracystic hemorrhage and can bleed or ulcerate (Fig. 28.5). Tongue lesions may cause bleeding, halitosis, dysphagia, dysarthria, and airway obstruction. 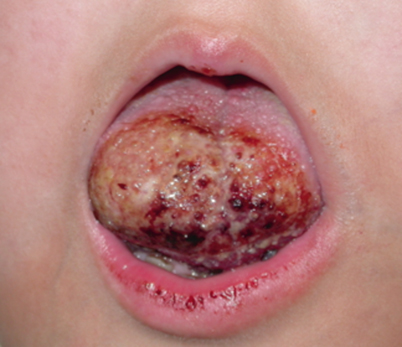 Superficial dermal involvement in a tongue LM. Multiple tiny vesicles, which bleed easily, are present
Macrocystic lesions are usually found below the level of the mylohyoid muscle, in the anterior and posterior triangles of the neck. They are typically multilocular structures consisting of numerous cysts that vary in size and shape .
Although LMs are benign, they can continue to expand and may undergo rapid enlargement secondary to infection, hemorrhage, or trauma, including operative intervention. Rapid growth of cervicofacial LMs may lead to significant clinical sequelae including:
1.

Airway obstruction: Infiltrative LMs that involve the floor of mouth, tongue, and oropharynx may frequently cause upper airway obstruction [20]. This may be sudden if there is a rapid increase in the LM secondary to infection, trauma, or hemorrhage, demanding immediate attention. Emergency orotracheal intubation is optimally performed under general anesthesia, allowing for full assessment of the extent of the lesion once the airway is secured. Tracheostomy may be required in cases of significant supraglottic or oropharyngeal involvement.
2.

Functional issues: Dysphagia, speech impairment and dental problems, may all be caused by involvement of the LM in the oropharynx and upper airway. A gastrostomy tube may be required for feeding. Gross involvement of the tongue may cause macroglossia, tongue protrusion, and impair speech. Neuropathy secondary to compression by large lesions can cause pain and parathesia.
3.

Deformity: Enlargement of LMs may cause gross cosmetic deformity, including macroglossia, prognathism, macrototia, and significant cervicofacial asymmetry, secondary to distortion of the craniofacial skeleton caused by bony hypertrophy. This in turn may lead to significant social ramifications and psychologic distress as the child becomes older.
4.

Hemorrhage and infection: A rapid increase in the size of a LM may be associated with hemorrhage or infection. Hemorrhage into a cervical LM may be associated with acute respiratory distress and airway obstruction. Infection may cause increased macroglossia and oropharyngeal cellulitis. If severe, admission to hospital with close airway monitoring and intravenous antibiotics are required. Chylothorax and chylopericardium have been reported in large cervicomediastinal lesions.

An accurate clinical history and examination should distinguish between an LM from a vascular tumor (hemangiomas) and can usually exclude other neck lesions including branchial, cleft cyst, lipoma, etc. In cases where the LM may be a mixed lesion with a venous complement, imaging studies, such as US, computed tomography (CT), and MRI, can aid diagnosis.

Although LMs are primarily diagnosed on clinical history and examination, the role of imaging plays an important role in not only confirming the diagnosis, but also determining the extent, and type of the lesion (microcystic vs. macrocystic), and its anatomic relationship to surrounding tissue planes, muscles, and vascular structures. Imaging is essential for preoperative planning, if surgery is considered. Primary imaging modalities include US, CT, and MRI with gadolinium. MRI with contrast is the study of choice (Fig. 28.6).
Only gold members can continue reading. Log In or Register to continue