The motor innervation of the intestines, ureter, urinary bladder, uterus, and adnexa is derived from the autonomic nervous system (Fig. 2–1).

The latter system in turn is divided into sympathetic and parasympathetic components.

Figure 2–2 details three groups of nerves supplying the autonomic input for female reproductive structures. One group originates from the 9th through the 12th thoracic cord segments, with preganglionic sympathetic fibers synapsing in the celiac and superior mesenteric ganglia, and postganglionic fibers following the ovarian vessels to synapse in the ovary and uterine tubes (oviducts). Afferent sensory fibers follow the same route in reverse. The second group, which is derived from T12, L1, and L2 segments, supplies the oviducts and the great pelvic vessels and enters the pelvis via the superior hypogastric plexus. The third group emanates from L2–L5 segments and synapses within the inferior mesenteric plexus and/or transmits via the inferior hypogastric plexus to the uterine and vagina plexuses. Postganglionic fibers in turn synapse in the uterine body, cervix, vagina, and erectile structures within the vulva.

Parasympathetic preganglionic fibers arising from the sacral nerve roots follow the branches of the hypogastric vessels and synapse in the uterovaginal plexus.

As previously noted, the hypogastric plexus (nerves) descends into the pelvis over (anterior to) the aorta and the left common iliac vein, entering the presacral space.

The inferior hypogastric plexus descends deep into the pelvis of the periosteum of the sacrum, where it is dispersed with remnants of the uterosacral ligaments and fat and numerous small blood vessels at a 3 : 1 ratio of venules to arterioles.

The bladder and the lower ureters are innervated via the pelvic plexuses by the autonomic nervous system (Fig. 2–3). Sympathetic nerves emanate from T10, T11, T12, L1, and L2.

Sensory impulses (visceral sensory) return to the spinal cord via similar pathways, transmitting via parasympathetic pathways and sacral cord segments. The latter transmit pain and proprioception (e.g., distention). Some sensory fibers from the trigone and the urethrovesical junction transmit pain via the pudendal nerves. Clearly, some sensory afferents reach the spinal cord via the hypogastric nerve plexus.

Parasympathetic postganglionic fibers synapse within the bladder’s detrusor muscle and exit via the postsynaptic muscarinic receptors, resulting in muscle contraction.

During the filling phase, bladder volume increases while parasympathetic output is inhibited. At the same time, α sympathetic discharge causes the urethral muscle to contract, thereby retaining a high-pressure gradient that favors the urethra over the bladder. When the level of fullness transmits, via afferent sensors and fibers, a feeling of discomfort (associated with high bladder volume), the brain in turn dispatches a release message, which triggers a parasympathetic discharge. The bladder muscle contracts and empties. Concurrently, sympathetic synapses in parasympathetic ganglia modulate ganglionic transmission, resulting in urethral muscle relaxation (by blocking contraction). The pressure gradient shifts in such a way that bladder pressure exceeds urethral pressure, thereby allowing micturition.

Sympathetic and parasympathetic fibers supplying the large and small intestines emanate from the celiac, superior and inferior mesenteric, and hypogastric plexuses (Fig. 2–4). Preganglionic parasympathetic fibers likewise originate in medullary nuclei (e.g., the medulla oblongata) of the vagus nerve and sacral cord segments. Vagally derived fibers supply the duodenum, jejunum, and ileum. Sympathetic preganglionic fibers are distributed from cord nuclei located at T8, T9, T10, T11, and T12, and at L1, L2, and L3; the latter relay within the ganglia of the sympathetic trunks and from there to plexuses, where synapses occur and postganglionic fibers distribute themselves to the intestines. Afferent and efferent somatic fibers, via the pudendal nerves, innervate voluntary (striated) muscles such as the levator ani and external sphincter ani. Because they are pelvic structures, innervation of the sigmoid colon, rectum, and anus is of special interest to gynecologists and obstetricians. 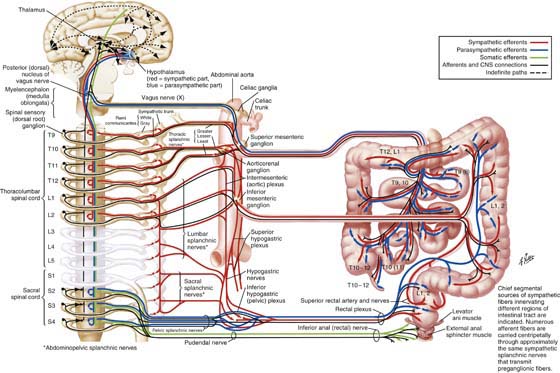 FIGURE 2–1 Details of the autonomic nervous system. Sympathetic efferents are red, and parasympathetics (vagal and sacral) are blue. The autonomic nervous system, totally consisting of motor (efferent) somatic nerves that control voluntary muscle activity, is shown in green; sensory (afferent) organs and muscles are black and may share pathways with autonomic and somatic nerves. (By permission, Netter’s Atlas of Human Anatomy.) 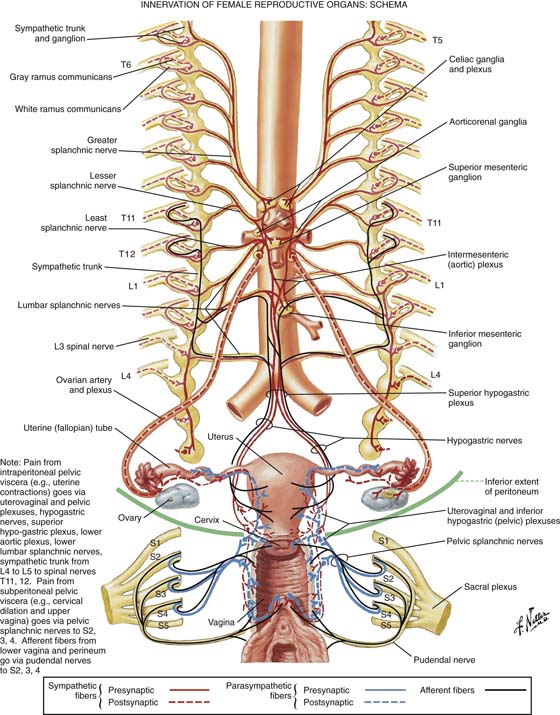