Human herpesvirus 6 (HHV-6) was isolated in tissue culture in 1986 from peripheral blood leukocytes of patients with both lymphoproliferative disorders and HIV infection. It is the major etiologic agent of exanthem subitum and has also been implicated in other clinical syndromes. HHV-6 is a prototypical member of the betaherpesvirus family of herpesviruses, which also includes human herpesvirus 7 (HHV-7) and human cytomegalovirus (HCMV). HHV-6 is subclassified as either variant A or B, based on differences in nucleotide sequence, restriction enzyme profile, and reactivity with monoclonal antibodies. HHV-6B is the subtype associated with exanthem subitum.1

Infection with human herpesvirus 6 (HHV-6) is ubiquitous, and virtually all children are infected by 2 to 3 years of age. Infection is seldom seen before 6 months of age, presumably due to the protective effect of transplacental antibody. The incidence of infection peaks between 6 and 12 months of age. HHV-6 can be found in the salivary gland, and is shed in saliva of seropositive individuals, suggesting that saliva is the probable route of acquisition of infection. Primary infection in children most likely occurs via contact with HHV-6 shed in the secretions of older children or caregivers. HHV-6 can also be associated with congenital infections: the clinical significance of such infections is not known.2,3

HHV-6 is a prototypical member of the betaherpesvirus family of herpesviruses, which also includes human herpesvirus 7 (HHV-7) and human cytomegalovirus (HCMV). It has tropism for T cells, and molecular studies reveal homology with HCMV, suggesting that the virus belongs to the family Herpesviridae. More recent evidence suggests that HHV-6 can be maintained in the host cell in a chromosomally integrated form, capable of producing viral mRNA and protein and, presumably, infectious virus.2

The spectrum of disease associated with primary human herpesvirus 6 (HHV-6) infection is broad, ranging from asymptomatic infection to fatal disseminated disease. Most commonly, however, primary infection occurs early in life and is manifest as either exanthem subitum or an undifferentiated febrile illness. Reports of HHV-6 infection linked to other clinical syndromes must be interpreted cautiously. Because infection is ubiquitous and persistent in nature, the finding of HHV-6 antibody, or even isolation of the virus, cannot with certainty always document HHV-6 as the cause of any given clinical syndrome in older patients.

Exanthem subitum (also known commonly as roseola infantum) is a common acute febrile illness of infants and young children characterized by 3 to 5 days of fever followed by rapid defervescence and the appearance of an erythematous macular or maculopapular rash (Fig. 312-1). It was at one time classified as “sixth disease” among the exanthematous illnesses of childhood.4 The infection is characterized by viremia prior to the onset of the rash. Fever can be quite significant. Prior to development of the characteristic rash, there are few other clinical clues to reliably indicate that the febrile illness is due to human herpesvirus 6 (HHV-6), although posterior auricular adenopathy is common. Because of the high fever and lack of differentiating clinical findings, many young infants will be subjected to extensive laboratory evaluation and empiric antibiotic therapy prior to the onset of the exanthem. In children treated empirically with antimicrobials, the onset of the rash may often be misinterpreted as an antibiotic “allergy.” The rash is either papular, macular, or maculopapular and appears mainly on the trunk. The pathogenesis of the rash is unknown but is presumed to be immune mediated. The rash usually fades within 3 to 4 days following onset. 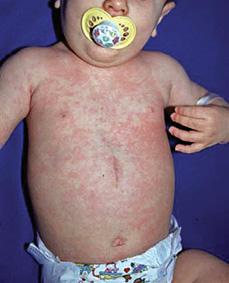