Implantation and formation of the germ layers (7–18 GD)

In obstetric practice, it is common to use 280 days (40 weeks) from the first day of the last menstrual period (LMP) to estimate the delivery date of a full-term pregnancy. This period has also become a convenient but inaccurate description of the number of weeks of ‘pregnancy’. This is an obvious source of confusion, since embryologists refer to the number of gestational days, i.e. days since fertilization, when discussing early human development. Since conception requires male and female gametes to be in the same place (the ampulla of the fallopian tube) at the same time (within a few hours of ovulation and within 6 days of intercourse), it can be approximated to:

~ 14 days after the first day of the LMP, i.e. an estimate of the day of ovulation in a woman with a regular 28-day cycle

the day of ovulation as judged by a change in basal body temperature, serum luteinizing hormone (LH), and/or oestrogen-to-progesterone ratios

6 days prior to the rapid increase in chorionic gonadotrophin levels that is associated with implantation of the embryo.

In most pregnancies, only the first of these options is available, and thus 8 weeks of ‘pregnancy’ implies 42 gestational days (GD).

Embryology is cursed with a dense, classically-based nomenclature. Attempts at standardization have often led to the same structure having at least two different names (e.g. yolk sac and umbilical vesicle; branchial and pharyngeal arches) and/or the same structure changing its name at different stages of development (e.g. allantois → urachus → medial umbilical ligament). This complexity can be disheartening, so only the most up-to-date terms will be used and these will be related to the mature tissues, wherever possible. Some transient structures are important in understanding malformations and these will be highlighted.

To start with the title of this chapter, the transition from embryonic to fetal life is at ~ 56 GD (i.e. ~ 10 weeks post-LMP). This is an arbitrary but useful boundary that is based on the fact that 90% of adult structures are recognizable at this stage. One of the most important concepts in embryogenesis is the establishment of the three main embryonic axes: (1) rostrocaudal (more correctly termed anteroposterior in early embryogenesis); (2) dorsoventral; (3) left–right (Box 2.1, Fig. 2.1).

Axis formation occurs in the early undifferentiated embryo to determine which end will be the head and which the tail (rostrocaudal axis); which is the front and which is the back (dorsoventral axis) and to which side the heart will loop (left-right axis) (Fig. 2.1). In other vertebrates, much of this information is coded by RNA and protein gradients in the cytoplasm of the fertilized egg or by the site of sperm entry. The nature of these signals in human embryos is not well understood. From a medical point of view, failure to form either the rostrocaudal or the dorsoventral axis would result in early embryonic lethality. Complete reversal of the left–right axis (situs inversus) can be a coincidental finding in healthy adults.

Kartagener syndrome is a genetic condition where situs inversus is associated with recurrent chest infections due to abnormal respiratory cilia. Identification of the molecular basis of this condition as a ciliopathy has elucidated the mechanism by which the left–right axis is formed. The primitive node is a specialized region at the caudal end of the primitive streak which is lined with ciliated cells. The nodal cilia function to sweep secreted signalling molecules to one side of the embryo, thus beginning a cascade of transcription which establishes left–right asymmetry.

In-vitro fertilization has greatly increased our understanding of the early cellular and molecular events in human embryogenesis (Fig. 2.2). Sadly for the male ego, the sperm has only three essential roles in embryogenesis: 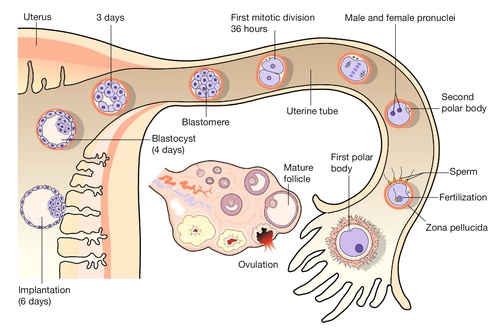 The embryo is then transported along the fallopian tube and implants in the uterine wall around 6 GD.

1. to stimulate a change in the zona pellucida that prevents further sperm entering the cell

The male and female gamete both contain 23 chromosomes, one copy of each autosomal chromosome (numbered 1–22 in decreasing order of size) and one sex chromosome (X in egg and X or Y in sperm). The DNA sequence of each pair of chromosomes is essentially identical, but the maternal copy we inherit functions differently from the paternal copy; indeed, they can be considered antagonistic. For example, the short arm of chromosome 11 contains the gene insulin-like growth factor type 2 (IGF2). Although there are two copies of IGF2 in each cell, only one is ever active and this is always on the paternally inherited chromosome 11. IGF2 produces a protein which promotes fetal growth (the ‘male’ drive) but is silenced on the maternal copy (the ‘female’ drive). This particular mechanism probably evolved to balance the conflict between the advantage to the male of having a large offspring at birth against the risk to the mother of delivering such a large offspring.

Differential gene activation is the result of the silencing of one copy of a gene via covalent modifications of both the DNA itself (methylation) and histone proteins (acetylation), which are intimately associated with the double-stranded DNA molecule. These parent-of-origin-specific modifications are known as ‘genomic imprinting’. Beckwith–Wiedemann syndrome is caused by specific genetic mutations that result in a fetus having two active copies of IGF2. This result is an infant that is large for gestational age and who is prone to tumour formation, particularly Wilms tumour. Several other examples of imprinting mutations are known.

3. to stimulate the second meiotic division in the egg with subsequent production of the second polar body.

In contrast to the sperm, the egg is a complex cell with many subcompartments, each with a critical role. At the most basic level, the egg carries a maternally imprinted haploid genome (Box 2.2). It also determines the orientation of at least one of the ‘axes’ in the early embryo (Box 2.1), and it provides all the RNA and protein synthesis requirements until the embryonic genome becomes transcriptionally active at 2–3 days post-fertilization.

The first mitotic division occurs 36 h after fertilization. The next four mitoses are at intervals of ~ 17 h and produce a ball of cells called a blastomere. After the fifth mitotic division, the blastomere becomes polarized as a sphere with a single-cell-layered wall (trophoblast) and an inner cell mass. The inner cell mass of this blastocyst contains the cells that will form the embryo itself. The 128 cells that are present following the seventh mitotic division still occupy the same volume as the initial fertilized egg, i.e. there has been no physical growth. The embryo sheds the zona pellucida at about this time, a process termed fancifully as ‘hatching’. Over these first 5 days, the embryo is transported along the fallopian tube and becomes attached to the uterine wall around 6 GD.

Implantation and formation of the germ layers (7–18 GD)

At implantation the trophoblast buries itself in the endometrium. The embryo thus gains access to the maternal circulation and behaves as an efficient paracytic organism, which enables a very rapid period of growth. The inner cell mass begins to differentiate and the embryo takes on the appearance of a disc consisting of two layers of morphologically distinct cells: the epiblast (the dorsal region) and the hypoblast (the ventral region, Fig. 2.3A). This is the first real evidence of embryonic polarity. The largest embryonic cavity at this stage is the umbilical vesicle, which is lined with hypoblast cells. The amniotic cavity begins to form by 9 GD and is lined with epiblast cells.

Fig. 2.3Formation of the germ layers.

(A) The inner cell mass takes on the appearance of a disc comprising two layers of morphologically distinct cells: the epiblast (the dorsal region) and the hypoblast (the ventral region). (B) Gastrulation is the process where cells from the epiblast migrate towards and through the primitive streak – a groove that forms in the caudal end of the disc – to form the mesoderm and to replace the hypoblast with the embryonic endoderm.

By day 16, the embryonic disc takes on an oval shape and a second axis (rostrocaudal or head–tail axis) becomes apparent. This is accompanied by a process known as gastrulation, during which cells from the epiblast migrate towards a groove in the caudal end of the disc known as the primitive streak (Fig. 2.3B). The migrating cells pass though the primitive streak and form a new embryonic compartment or ‘germ layer’ called the mesoderm. The dorsal epiblast now becomes the embryonic ectoderm and the hypoblast is replaced by embryonic endoderm. The embryo now has three ‘germ’ layers bounded by the umbilical vesicle ventrally and the amniotic cavity dorsally.

The outline of organogenesis given here is necessarily brief and is divided into five main areas:

Formation of the neural tube and primitive brain is the first evidence of organogenesis. It begins at 19 GD, when a midline groove forms on the dorsal ectodermal surface, rostral to the primitive streak. This change in the surface ectoderm is induced by a strip of specialized midline mesodermal cells called the notochord (Fig. 2.4). Two important paired structures form on either side of this groove: 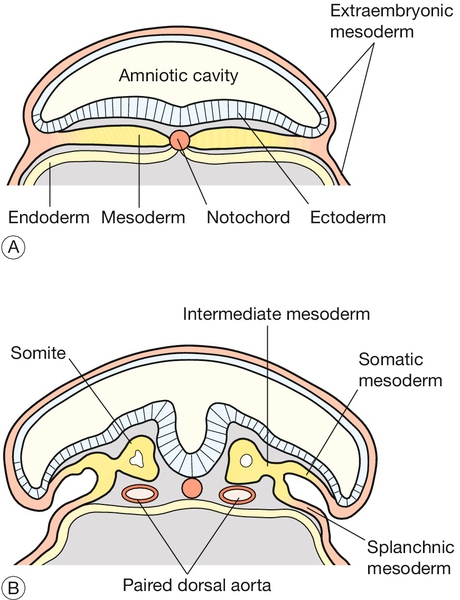 Fig. 2.4Formation of the neural tube.