From its inception in the early 1980s, heart transplantation had seen a steady rise in the numbers of operations performed. However, about 15 years ago, the procedure reached a worldwide plateau of approximately 400 pediatric transplants being performed each year. Limits on pediatric donor availability appear to be the reason for the limitation on transplants performed.

Heart transplantation is performed in cases of end-stage heart failure. The primary causes are described in Chapter 497.1 Dilated cardiomyopathy (DCM) with heart failure is the most common indication for heart transplant in children less than a year old. Congenital heart disease is the most common diagnosis in children age 1 and older listed for heart transplant, accounting for 64%, whereas cardiomyopathy accounts for 30%. In the early period, heart transplant was indicated as primary therapy for congenital heart lesions that were not amenable to surgical repair, including hypoplastic left heart syndrome (HLHS).2 As staged palliative surgery for HLHS and other complicated lesions with single ventricle physiology has improved, and the relatively high death rate for these infant candidates while awaiting heart transplantation has become apparent, referral for infants with congenital heart disease has become more selective. Other indications include rare cases of malignancy, and repeat transplantation (see below).

In 2007, the American Heart Association issued a scientific statement on indications for heart transplantation in pediatric heart disease.3,4 Because of the lack of randomized pediatric clinical trials to inform a strictly evidence-based practice, the recommendations shown in Table 132-1.

Determination of the best timing for consideration of heart transplantation is complicated by the reality of donor shortage, risks associated with lifelong immunosuppression, and the development of improved surgical palliation of complicated congenital heart diseases, as well as improved therapies for heart failure. The optimal timing for heart transplant is prior to irreversible end-organ damage occurring as a result off low cardiac output. This decision is complicated by the lack of predictability for the availability of a suitable pediatric donor, which results in mortality rates of 17% to 31% in children awaiting heart transplant.2,5,6 Potential transplant candidates undergo multidisciplinary evaluation to explore alternative medical or surgical options, to identify other conditions that may otherwise limit life expectancy, and to reveal psychosocial challenges regarding ability to adhere to the complicated postoperative medication regimen and care plan.

Organs are allocated to recipients based on blood type, medical urgency status, waiting list time, and proximity to donor location. Pediatric cardiac listing status established by the United Network for Organ Sharing in the United States (status 1A, 1B, or 2) is based on prioritizing those children at highest risk of dying without transplantation.

Orthotopic heart transplantation for congenital heart disease often provides surgical challenges because of underlying anatomy as well as the history of multiple previous thoracic operations. Abnormalities in a recipient’s systemic and or pulmonary venous return, anatomy of the great vessels, situs, presence of aortopulmo-nary collaterals, or other lesions requiring repair at time of transplantation must be recognized. For example, a previous palliative surgery such as insertion of a Glenn shunt would need to be taken down and venous return reconstructed prior to graft implantation. Anticipated need for vascular reconstruction must be planned at the time of listing as extracardiac vessels from the donor may be required for successful graft implantation.7

Another important consideration is the presence of increased pulmonary vascular resistance (PVR). Elevated PVR can be associated with cardiomyopathies or congenital heart disease. Systemic ventricular dysfunction can result in elevated left atrial pressure and subsequent elevated pulmonary arterial pressures and pulmonary vascular resistance. Elevated PVR is often reversible following the correction of the causative physiologic or anatomic factors, but pulmonary vascular disease, from any etiology, may progress and become irreversible, which then may preclude heart transplantation because of the risk of posttransplant right heart failure.

The use of mechanical circulatory support, via extracorporeal mechanical oxygenation (ECMO) and/or ventricular assist devices, as a successful bridge to heart transplantation in children is increasing as pediatric-sized devices are becoming more available in the United States.8

An important consideration for donor selection in pediatric heart transplantation is the selection of an appropriately sized heart. Size matching is based on recipient weight and height (rather than by age), and the size of recipient’s mediastinal cavity. The cause of donor death must also be considered. Donors with chest trauma are at risk for cardiac contusion and potential graft dysfunction. Transient myocardial dysfunction may occur in the setting of brain death as a result of neurohormonal storm, intrinsic and exogenous catecholamine exposure, metabolic abnormalities in the setting of diabetes insipidus, and hemo-dynamic alterations due to varying volume status and blood pressure.

Blood type compatibility is a major issue in selection of an appropriate donor–recipient pair for solid organ transplantation. However, ABO-incompatible (ABO-I) heart transplantation is increasingly successfully performed in infants who have yet to develop isohemagglutinins, which typically occurs at about age 1. This approach broadens the pool of potential donors for a group of children in which the waiting list mortality rate exceeds 30%.7 Recent reports show a reduced waiting list mortality with comparable outcomes to in matched donor–recipient pairs.9-11 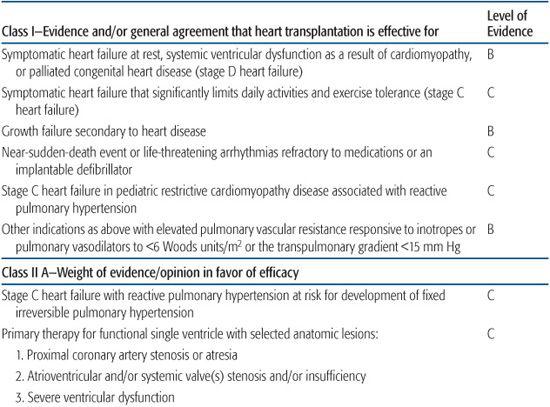 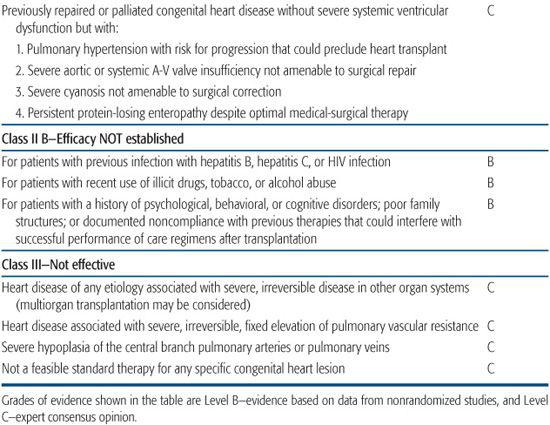 Acute cellular rejection is graded from grade 0 to III, with III being most severe (for further description and illustrations see: tpis.upmc.com). Mild rejection is characterized predominantly by mononuclear perivascular and/or interstitial inflammation, which is generally mild and not associated with myocyte necrosis. Mild acute rejection is often not treated with increased immunosuppression. The most useful histopathologic features used to distinguish between mild and aggressive multifocal rejection are the severity of the inflammation, myocyte necrosis, and the presence of segmented leukocytes (especially eosinophils). As the rejection reaction worsens, one can see focal areas of myocyte necrosis, edema, interstitial hemorrhage, and occasionally a frank vasculitis associated with myocyte damage.

Antibody-mediated rejection, also referred to as humoral or vascular rejection, refers to left ventricular dysfunction without evidence of cellular infiltrate on biopsy but with evidence of endothelial damage, swelling, and complement fixation. This most commonly occurs in the presence of circulating donor specific anti–human leukocyte antigen (HLA) antibodies in the recipient. Immunostaining of the biopsy for complement (C3d, C4d, and/or C1q) and CD68 stain for macrophages (CD31, CD34-positive) facilitates diagnosis. Recipients who are sensitized pretransplant with elevated panel-reactive antibodies are at highest risk for humoral rejection. This process has been associated with decreased graft survival in other solid organ transplants and in adult heart transplant recipients and is now being recognized as a potential mediator of chronic rejection and graft dysfunction in pediatric heart transplant recipients.15,16

Rejection treatment varies depending on severity. Increased immunosuppression with corticosteroids and other agents is similar to that for other solid organ transplants as discussed in Chapter 128.

Cardiac graft vasculopathy (CGV) refers to circumferential narrowing of the coronary artery vessel lumen that develops over time and results in ischemia to the cardiac graft. Ongoing ischemic injury leads to graft dysfunction and a risk of sudden death. The overall incidence of angiographically apparent graft vasculopathy at 1, 3, and 5 years after pediatric heart transplantation is 2%, 9%, and 17%, respectively.17 Graft vasculopathy should be suspected in the transplant recipient with poor cardiac function and/or regional wall motion abnormality on echocardiogram, ischemic changes on ECG, and/or hemodynamic abnormalities on catheterization without evidence of rejection. Diagnosis of graft vasculopathy is made via coronary angiography, which may demonstrate either focal stenosis or diffuse narrowing of proximal or distal vessels. Intravascular ultrasound can also be used to visualize vessel narrowing in larger children. Pathology reveals circumferential intimal proliferation of the walls of the proximal and distal vessels of all sizes.

Fifty percent of patients with moderate to severe coronary disease suffer graft loss or death within 2 years of angiographic diagnosis. Increased episodes of acute rejection and rejection with hemodynamic compromise have been associated with increased risk of CGV.18-20 Older age at time of transplant and viral infection with cytomegalovirus (CMV) have also been implicated in the etiology of CGV. Short-term therapy of CGV is attempted with modification and augmentation of the immunosuppression regimen. Angioplasty and coronary stenting have not proved to be efficacious in this disease because of its diffuse and progressive nature.21 Retransplantation is the only effective long-term therapy.

Survival after pediatric heart transplant has been steadily improving over the past 25 years.1,12 Six-month survival after transplant has improved from 74% in the period 1982–1989, to 90% in the period 2000–2005, as shown in Figure 132-1. Experience with patient selection and postoperative intensive care unit management are likely the major contributors to this decrease in early mortality. Outcomes according to age at transplant are shown in eFigure 132.1

.1 The median graft survival (or “half-life”) was 15.8 years for infant recipients, 14.2 years for childhood-age recipients, and 11.4 years for adolescents. The infant age group has a bimodal survival curve, with higher early mortality but seemingly lower late mortality than the older cohorts. The increased early mortality is related to the increased incidence of congenital heart disease in this transplant population, which is an independent risk factor for 1- and 5-year mortality. When survival curves are calculated based on conditional models of survival to at least 1 year post transplant, the differences between the age cohorts are even more pronounced. The infant cohort has the longest median survival at more than 20 years, whereas adolescents have the shortest, at 15.2 years.

Improved long-term survival appears to be related to a relative sparing in infant recipients from the risks of rejection, vasculopathy, and late mortality. Whether this difference represents a true form of graft tolerance in the infants versus the insurmountable problem of nonadherance in the adolescents, or some combination of these effects, is unknown.

Despite all the potential adverse outcomes and posttransplant complications, overall quality of life and functional status are quite good. More than 90% of survivors up to 10 years after heart transplant report no activity restrictions. Although 50% may require a rehospitalization in the first year after transplant, only about 25% report rehospitalization beyond that first year.1 Children with symptomatic or even subclinical heart failure, and/or with lifelong cyanosis, often experience an immediate benefit from improved cardiac output and biventricular circulation.