Embryologic development may be thought of as having two phases: an embryonic period during which organ systems evolve and organize, and the fetal period, from the 12th week of gestation, during which these organ systems grow and mature.

Embryologically, the musculoskeletal system develops from the dorsal (somatic) mesoderm. Approximately 26 days after fertilization, the upper limb “bud” appears on the ventrolateral body wall, consisting of mesenchymal cell swelling covered by ectoderm. The tip of this ectodermal layer thickens to become the apical ectodermal ridge (AER), under which an area of rapidly proliferating, undifferentiated mesenchymal cells forms (the progress zone). The lower limb bud appears about 2 days after the upper; this slight delay relative to the upper limb in appearance, organization, and maturation continues throughout limb development. With continued growth and development, a chondrogenic core forms, beginning proximally and progressing distally (characteristic of both upper and lower limb formation). This chondrogenic core evolves to the point that the upper limb skeletal elements, except for the distal phalanges, are present by the seventh week (eighth for the lower limb). Subsequent to the development of the chondrogenic skeletal structure, nerve invasion of the limb occurs, followed quickly by skeletal muscle tissue formation. Joints form by programmed chondrogenic cell death (apoptosis) producing clefts within the chondrogenic skeleton. Further healthy joint development is dependent on movement, which is in turn dependent on the development and maturation of innervated skeletal muscle. By the eighth week, major tissue differentiation in the limbs is complete, and the majority of the remaining fetal period is dedicated to growth. Excellent detailed reviews of musculoskeletal embryology are available.1-3

All other appendicular and axial bones form by enchondral ossification—that is, by gradual ossification of a cartilaginous anlage. Instead of converting directly into osteoblasts, condensations of mesenchymal cells transform into cartilage matrix-secreting chondroblasts. Long bones are anatomically characterized by a central shaft (diaphysis) flaring to a broader metaphysis at either end, and they terminate in a typically bulbous, articular cartilage-capped, epiphysis (Fig. 210-1). In the central region of each cartilage anlage, capillary invasion results in the replacement of chondroblasts by osteo-blasts, and the formation of primary centers of ossification. Ossification of the cartilaginous anlage then continues centrifugally. The epiphyses at various stages of development, particular to the individual bone, experience vascular invasion as well, resulting in the formation of secondary centers of ossification.1,4 Once the secondary centers of ossification have appeared, the cartilaginous growth plate (physis) can be “visualized” radiographically as the radiolucent disk between the bony metaphysis and epiphysis. The appearance of the various secondary centers of ossification typically occurs within a relatively narrow age range, so that their absence or appearance may be used to estimate the age of the fetus and infant (eFig. 210.1

). Similarly, the physes will disappear (“close”) at skeletal maturity; the timing of physeal closure is specific to the individual physes and is location and gender dependent (eFig. 210.2

). At a more sophisticated level during later stages of growth, careful analysis of the maturation of the distal radial and ulnar epiphyses, carpals, metacar-pals, and phalanges forms the basis for the calculation of skeletal (or “bone”) age. These estimations may used to identify hormonal growth inhibition and allow a calculation of growth remaining in long bones and, to a lesser extent, the spine. 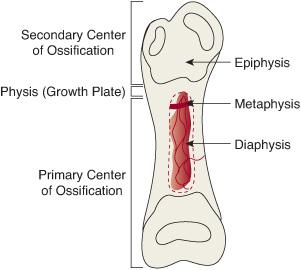