. Fever and Infection in the Immunocompromised Patient

Fever and Infection in the Immunocompromised Patient

A key element in the effective care of immuno-compromised patients with fever and infection is hypervigilance. Not only are these patients at increased risk from a diverse range of microorganisms, but also their resulting infections can present with subtle or atypical symptoms and can progress to difficult-to-treat chronic disease states, or to acute life-threatening clinical decompensations. Given these facts, empiric anti-infective therapy is sometimes justified before the definitive cause of a fever is elucidated. Yet, the same facts also argue for the vital importance of making an accurate and exact diagnosis, to guide definitive ongoing therapy.

Toward this end, the general features of a thoughtful diagnostic approach to fevers in immunocompetent patients remains valid for immunocompromised patients, including a systematic consideration of noninfectious diagnoses (see Chapter 228). Likewise, a thorough exposure history remains essential and is expanded to include microorganisms traditionally considered to be “environmental” or of “low virulence.”

Published guidelines for the use of antimicrobial agents in certain sets of immunocompromised patients outline contemporary standards of care and can provide useful algorithms to help improve outcomes for these patients (for clinical practice guidelines, refer to www.idsociety.org/Content.aspx?id=9088). However, a key first principle of such guidelines should be the importance of frequent reevaluation of an immunocompromised patient’s course and care, given his or her extreme medical vulnerability. Furthermore, optimal care may require input from a physician with expertise in treating immuno-compromised patients infected with microorganisms that are often difficult to treat, such as fungi or mycobacteria.

Aside from inherited immunodeficiencies, acquired conditions such as HIV/AIDS and severe malnutrition are also significant root causes of immunodeficiency world-wide, particularly among children in medically under-served and economically depressed areas.

In developed countries, immunodeficiency is now most commonly iatrogenic in origin. Cytotoxic chemotherapy for malignancy is an extensively studied, and repeatedly encountered, iatrogenic cause of immune dysfunction. Moreover, severe connective tissue disease and increasingly common organ transplantation now provide other medical indications for immune suppression, often mediated by newer drugs or regimens with novel immunosuppressive effects. As a consequence, both the incidence of severe immunodeficiency and the variability of its manifestations have markedly increased over previous decades.

As shown in Table 229-1 and discussed in Chapter 187, T-cell–mediated immunity is particularly important for defense against fungal and viral infections, the reticuloendothelial function of the spleen for clearing encapsulated bacteria from the blood, terminal complement components for lysing opsonized bacteria such as Neiserria meningitidis, the neutrophil oxidative burst for killing catalase-positive bacteria and fungi within neutrophils, and the importance of antitoxin antibodies in preventing toxic shock induced by the TSST-1 superantigen. 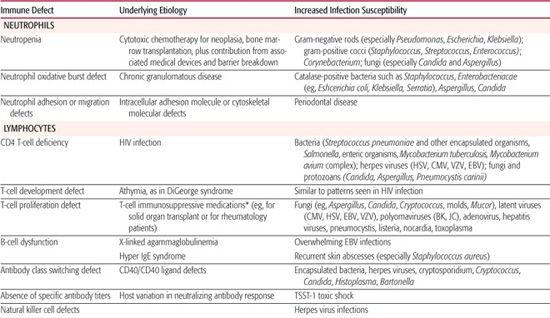 Yet, from a clinical perspective, the pathophysiology of infections in immunocompromised hosts often reflects a combination of factors. For example, following cytotoxic chemotherapy for cancer, patients are predisposed to overwhelming sepsis not only because they are neutropenic, but also as a function of their mucosal breakdown, intravascular catheter infection risks, and prior antimicrobial therapy that can select for drug-resistant microbial flora.

MANAGEMENT OF FEVER IN THE NEUTROPENIC CHILD

Management of fever in the child with profound neutropenia provides one paradigm for the care of suspected infection in a child with severe immunocompromise. Obviously, this approach is not universally applicable to all immunocompromised children, but it includes core concepts that can be generally applied to children with immune deficit. These concepts include the association between certain defects of immunity and propensity for specific infections, empiric therapy choice and modification, step-wise diagnostic evaluation, treatment duration decisions, and interval assessment parameters.

In the context of antineoplastic therapy, neutropenia is traditionally defined as an absolute neutrophil count (ANC) <500 cells/mm3, or as an ANC of 1000 cells/mm3 with a predicted decrease to <500 cells/mm3. Quite distinct from the prolonged fever duration required for classic definitions of fever of unknown origin (FUO), fever is here defined as a single oral temperature ≥38.3°C (101°F), or ≥38.0°C (100.4°F), for at least 1 hour.1

Key clinical features of febrile neutropenic patients depend on the depth and duration of their neutropenia. Hence, a detailed history of recent cytotoxic treatments, to predict an anticipated ANC nadir, can be particularly helpful. Fifty percent of febrile neutropenic patients prove to have infections, with risk of infection increasing with decreased ANC and with duration of low ANC.1,2 One in five patients with fever and an ANC <100 have bacteremia; of particular relevance are the bacteria listed in Table 229-1, but an extremely diverse range of other bacteria can also be responsible.1 Neutropenia also predisposes to severe fungal infections, especially with Candida and Aspergillus species, particularly among patients who have received courses of broad-spectrum antibacterial drugs.

Neutopenic hosts often lack classic signs and symptoms of inflammation, such that severe infections can exhibit remarkably occult presentations. Furthermore, lack of classic inflammation on exam does not preclude rapid progression to systemic decompensation. Indeed, a fundamental challenge in caring for immunocompromised patients is that they can present in extremis from overwhelming infection. Accordingly, attention to signs of shock, hypoxia, or deep-organ infections is essential.

Examination should seek even subtle signs of infection, such as pain in anatomic sites, including the periodontium, pharynx, esophagus, lung, perineum, eye, skin and nails, and near vascular access sites. Imaging studies should include a chest X-ray for patients with any respiratory signs or symptoms, or for those who will be managed as outpatients. CT or MRI of the abdomen, sinuses, or other sites may also be recommended, based on relevant symptoms or previous history of infection at these sites.

Blood cultures, including those drawn from all lumens of central lines, are a cornerstone of diagnostic evaluation to detect bacteremia or fungemia, identify specific microorganisms, and define their susceptibilities to antimicrobials. Quantitative cultures, drawn in parallel of blood from central line lumens versus peripheral blood, can help assess the likelihood of a central line serving as an ongoing nidus of infection.

TREATMENT OF THE FEBRILE NEUTROPENIC CHILD

Regardless of findings on physical examination and initial laboratory investigations, all neutropenic patients with fever should receive empiric antimicrobial therapy directed at the microorganisms most commonly identified in this setting. Whereas gram-negative rods (particularly Escherichia coli, Klebsiella, and Pseudomonas) were formerly the most commonly isolated, more recent trends have shown gram-positive organisms accounting for more than 50% of blood cultures in children undergoing chemo-therapy.6,7 Coagulase-negative staphylococci, which are the single most commonly isolated organisms, follow a relatively indolent course. However, some gram-positive bacteria, such as Staphylococcus aureus and the viridans Streptococcus mitis, may be associated with rapidly progressing shock, noncardiogenic pulmonary edema, and multiorgan failure, which is more traditionally associated with gram-negative sepsis.8

Empiric parenteral antimicrobial therapy can take one of several forms, but needs to address contemporary local patterns of infection and resistance. As a general rule, a regimen should provide broad coverage for gram-negative organisms, including Pseudomonas, and at least some coverage for S aureus. US Food and Drug Administration–approved single-agent regimens meeting these criteria include ceftazidime, cefepime, or carbapenem (eg, meropenem or imipenem). A carbapenem is preferred if local rates of extended-spectrum β-lactamase (ESBL) positive strains are high, or if Klebsiella infection is suspected.

Although initial therapy with two agents is often used, studies to date do not detect marked differences in outcome between empiric mono-therapy and duotherapy. The potential benefits of adding an aminoglycoside to the single-agent regimens listed previously include synergistic activity against many gram-negative organisms and a decrease in the emergence of drug resistance. However, this must be balanced with known risks for aminoglycoside-induced ototoxicity and nephrotoxicity. These risks are not only acute and dependent on renal function dynamics,9 but they may also be cumulative among repeatedly exposed patients.10

The decision whether vancomycin should be included in the initial regimen deserves particular attention. Unwarranted overuse of vancomycin has significant negative effects, including powerful selection for vancomycin-resistant enterococcus. Past recommendations from the Infectious Diseases Society of America (IDSA) have concluded that vancomycin should only be added to the initial regimen if the patient has an obvious catheter-related infection, severe mucositis, β-lactam–resistant Streptococcus pneumoniae, hypotension or other signs of sepsis, or known colonization with methicillin-resistant Staphylococcus aureus (MRSA). The full clinical relevance of what appears to be a new epidemiologically ascendant clone of MRSA remains to be determined, but it may well be a serious additional gram-positive threat to immunocompromised children 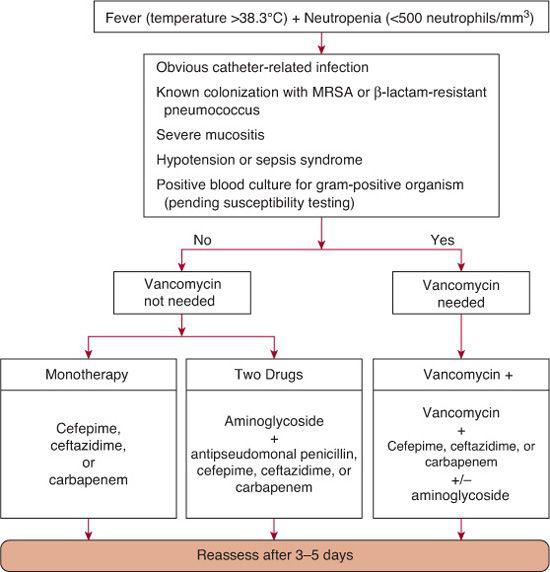