Morphologically, the enteroviruses are icosahedral-shaped virions that lack an envelope. The capsid is composed of 60 units each of 4 viral capsid proteins: VP1, VP2, VP3, and VP4. They are acid-, ether-, and chloroform-stable and are inactivated by heat (> 56°C), ultraviolet light, chlorination, and formaldehyde. These characteristics confer environmental stability, permitting them to survive for days to weeks in water and sewage.

In the United States and the Americas, as a result of effective vaccination programs against the polioviruses, these members of the genus no longer circulate endogenously. With the exception of Africa and the Indian subcontinent, the wild-type polioviruses have been eradicated from the endemic circulating pool of enteroviruses throughout the world.38 Although wild-type poliovirus infections no longer occur in North America and the Americas, occasional outbreaks or introductions of vaccine-derived polioviruses continue to occur.39,40

The highest incidence of enteroviral infections is observed in infants under 1 year of age and in toddlers 1 to 4 years of age. Evidence of secondary enteroviral infections are observed to occur in more than 50% of susceptible members of households with an infected child.46,50,51 In addition to well-recognized communitywide enteroviral outbreaks,33,46-48 outbreaks have been reported to occur in neonatal units and nurseries,52-55 schools,56,57 childcare centers,51,58,59 camps and pools,56,60-63 as well as among football teams.64-67 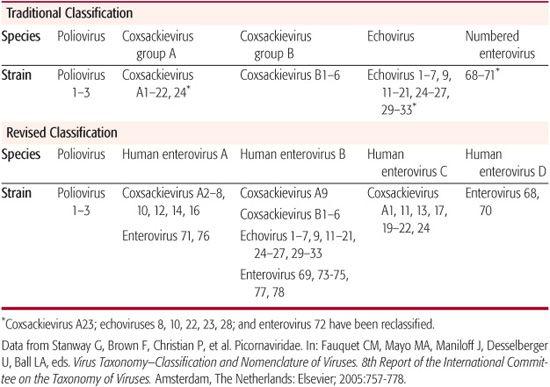 Humans are the only hosts for the enteroviruses. While several modes for transmission of the enteroviruses exist (fecal-oral, respiratory, transplacental, perinatal, self-inoculation), the major route is that of the fecal-oral.

Once infected, individuals may shed virus from the respiratory tract for 1 to 2 weeks and from the gastrointestinal tract for 6 to 8 weeks.46,72-74

After oral or respiratory routes of infection, the enteroviruses infect cells in the upper respiratory and, predominantly, the lower gastrointestinal tracts.71 Enteroviral replication in the gastrointestinal and upper respiratory tracts results in a primary or minor viremia that leads to seeding of organs (liver, lung, heart, and central nervous system) distant from the sites of primary infection. A second, major viremia ensues following replication at these sites. Replication in organs seeded during the minor viremia results in the clinical manifestations of enteroviral infection. Vertical transmission to the fetus is possible during the viremic stages of maternal infection. If the central nervous system (CNS) was spared during the minor viremia, it may become infected as a result of the major viremia. This may explain the biphasic nature of illness associated with polio and nonpolio enteroviral infections of the CNS. The mechanism(s) by which the enteroviruses gain entry to the CNS are not yet clearly determined. Viremia and viral replication in the CNS ceases once the host produces a type-specific antibody response. Individuals with altered humoral immunity are at risk for severe and chronic enteroviral infections.

The enteroviruses are common causes of febrile illness without an apparent focus, particularly in infants and toddlers under 2 years of age.85-88 The onset of the illness is typically abrupt with fever (≥ 38°C) in combination with 1 or multiple signs and symptoms: poor feeding, lethargy, irritability, emesis, diarrhea, and upper respiratory tract symptoms. In approximately one quarter of patients, an exan-them may be present. The fever may be biphasic.88 Older children may complain of abdominal pain. On physical examination, findings are absent or minimal and may consist of mild pharyngeal and conjunctival injection, lymphadenopathy, and exanthems. The duration of illness is generally less than 5 days.

The clinical presentation of enteroviral meningitis varies with age. In neonates, the dominant symptoms consist of fever (≥ 38.0°C) and irritability. The fontanelle may be full or bulging. A rash may be occasionally present. Meningoencephalitis in neonates may be manifested by fever, profound lethargy, seizures, full fontanelle, focal neurologic abnormalities, and, much less commonly, nuchal rigidity.95-99

In infants outside of the neonatal period and in children, the onset of enteroviral meningitis is generally abrupt with fever (38°– 40°C).90,93,101,102 The pattern of the fever may be biphasic.103-105 Young children and infants may be irritable or lethargic and exhibit other nonspecific signs such as poor feeding, emesis, diarrhea, and rash.93,98,106 The fontanelle may be full.90,98 Signs of meningeal irritation increases with advancing age.90,98 Headache is present in nearly all who can report it.106 Photophobia is a common clinical component of the disease. Seizures occur in less than 5% of cases.98,101 Nonspecific findings, singly or in combinations, such as rash, malaise, sore throat, abdominal pain, nausea, vomiting, and myalgia, are common. The entire illness may exhibit a biphasic course.104,108

Potential complications of meningitis include coma, increased intracranial pressure, as well as inappropriate secretion of antidiuretic hormone, but these occur uncommonly.98,109

The presentation of enteroviral meningitis in adolescents and adults is less well characterized.33,58,110-113 Photophobia, fever (≥ 37.5°C), signs of meningeal irritation, nausea, emesis, and neck stiffness are reported in greater than two thirds of patients. Myalgia has been reported in approximately 20% to 90% of patients. Less frequent findings include rash and abdominal pain. The time to full recovery in adults may take up to 2.5 weeks.110

Enteroviral encephalitis predominate in children.106,108,111-122 Enterovirus infections may result in generalized or focal encephalitis. It is estimated that 500 to 1000 cases of enteroviral-related encephalitis occur each year in the United States.15 Prior to the incursion of West Nile virus into the Americas, enterovirus accounted for as much as approximately 10% to 20% of proven viral encephalidities in North America.123-126

Fever, headache, malaise, myalgia and upper respiratory symptoms, nausea, emesis, or diarrhea may precede the onset of the neurologic findings of enteroviral encephalitis. Viral exanthems have occasionally been reported.118 CNS signs and symptoms may consist of confusion, irritability, weakness, lethargy, and somnolence. The patient may progress to a state of coma. Generalized or focal seizures may occur.116-118 Reported focal neurologic findings may include hemiplegia, hemichorea, and paraesthesia.108,114,117,122,129

Encephalitis due to enterovirus 71 deserves special mention. A severe brainstem encephalitis (ie, rhombencephalitis) has been reported primarily in children.131 The illness may have a biphasic presentation with either hand-foot-and-mouth disease or herpangina preceding the onset myoclonus, the principle neurologic manifestation. The severity of the rhombencephalitis varies. In Grade I rhombencephalitis, myoclonic jerks are associated with tremor and/or ataxia. Grade II myoclonus is associated with cranial nerve involvement. In its most severe presentation, myoclonus is transient and followed by the rapid onset of respiratory distress secondary to neurogenic pulmonary edema, cyanosis, poor perfusion shock, coma, and apnea. Mortality with grade III disease may approach 70%. Reported neurologic sequelae include myoclonus, abducent-nerve palsy, facial diplegia, ataxia, dysarthria, internuclear ophthalmoplegia, and central apnea.

Enterovirus infections can result in a plethora of exanthematous syndromes,138 with any particular serotype capable of causing several different types of rash. The exanthems of enteroviral infection are more commonly associated with infections of individuals 15 years or younger.139 With the exception of coxsackievirus A16, no single enterovirus serotype is associated with a unique exanthem. The characteristics of the rashes include maculopapular, macular, papular, morbilliform, rubelliform, vesicular, urticarial, papulopustular, and scarlatiniform.138,140 A petechial rash reminiscent of that seen with meningococcemia may occur.138,141

Hand-foot-and-mouth disease, has been typically associated with coxsackievirus A16.138,142 The illness is heralded by low-grade fever, malaise, anorexia, and oral soreness. One to 2 days later, an oral enanthem appears, characterized by macules that rapidly vesiculate and ultimately ulcerate. The lesions resemble those of aphthous stomatitis and are typically distributed on the buccal mucosa and tongue. The exanthem occurs in approximately two thirds of cases and consists of 3-mm to 7-mm vesicles on slightly erythematous bases. The hands are most commonly involved, followed by the feet and buttocks. The vesicles predominantly involve the dorsal surfaces of the hands and feet, but the palms and soles are also involved (Fig. 306-1). The illness usually lasts less than a week.

Herpangina is most commonly caused by the group A coxsackieviruses.144 The onset is marked by fever to as high as 41°C with the higher temperatures more commonly seen in younger patients.147-149 The enanthem is principally located to the anterior pillars of the tonsillar fauces. It may also be present on the soft palate, uvula, and tonsils. The enanthem consists of papulovesicular, grayish-white lesions, 1 to 2 mm in diameter, with an areola of erythema. The lesions progress from papular to vesicular, increase in size (3–4 mm), and ulcerate (Fig. 306-2). Associated findings and include sore throat, mild cervical lymphadenopathy, sialorrhea, anorexia, dysphagia, abdominal pain, and emesis. The illness generally lasts 10 days. 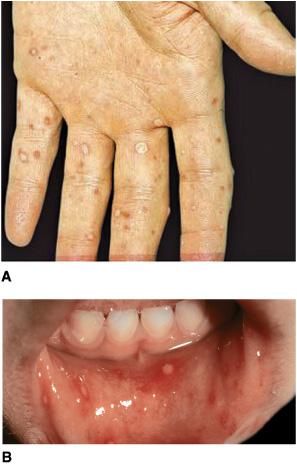