Adverse drug reactions in children are uncommon. Nevertheless, drug-induced hepatotoxicity, when it occurs, must be promptly recognized, and the offending agent discontinued, although cessation does not always result in rapid recovery. Delays in recognizing hepatic injury may significantly contribute to morbidity, resulting in a need for liver transplantation or in death.1-5

The role of the liver in the processing or biotransformation of xenobiotics (foreign substances) is discussed in Chapter 418. Mechanisms of hepatoxicity vary, as they depend on the drug, dosage, and patient factors such as age, gender, nutrition, and genetic predisposition. In general, medicinal and environmental agents known to cause hepatotoxicity have been characterized as predictable (intrinsic) or unpredictable (idiosyncratic) hepatotoxins. The patterns of liver injuries are clinically and histopathologically diverse (Table 422-1).

Specific hepatotoxins that are commonly prescribed for the pediatric population include analgesics (acetaminophen), anticonvulsants, and antibiotics. Acetaminophen is a predictable or intrinsic hepatotoxicant and acetaminophen overdose has been recognized as one of the most common causes of liver failure in the United Kingdom and the United States. Specific therapy for acetaminophen overdose is available. N-Acetylcysteine, when provided in the first hours or days after overdose, replenishes glutathione stores and enables the liver to metabolize acetaminophen without generating toxic metabolites (see Chapter 120).

Examples of idiosyncratic hepatotoxic reactions are those associated with phenytoin, an anticonvulsant, and sulfasalazine, used in the treatment of inflammatory bowel disease. These drugs may cause an illness that resembles a hypersensitivity reaction, with lymphadenopathy, fever, sore throat, and peripheral as well as tissue eosinophilia. Other idiosyncratic reactions may depend on drug metabolism and are not necessarily associated with this clinical picture.

Commonly prescribed antibiotics such as erythromycin have been associated with hepatic injury, although antibiotic-associated hepatotoxicity appears to be more common in adults. Nevertheless, fulminant hepatic failure has been reported in a child receiving trimethoprim-sulfamethoxazole. Minocycline, frequently used in the treatment of adolescent acne, has been associated with the development of autoimmune hepatitis. The loss of intrahepatic bile ducts or “vanishing bile duct syndrome” has been associated with synthetic penicillins and the anticonvulsant carbamazepine. Pemoline, a stimulant used in the treatment of attention deficit disorder, has been reported to cause hepatic necrosis. Oral contraceptives have been associated with hepatic vein thrombosis (Budd-Chiari syndrome) and liver tumors. Recreational drugs of abuse are increasingly reported as causes of hepatic injury in adolescents.

It is mandatory that a history of prescribed, over-the-counter, or illicit drug usage be sought in any child who presents with evidence of hepatic dysfunction. The treatment of drug-induced liver injury depends largely on timely recognition, which may be evident by increased serum aminotransferase values, conjugated hyperbilirubinemia, coagulopathy, jaundice, or more systemic side effects such as fever, lymphadenopathy, and rash. Once a drug-induced liver injury is identified, therapy is mainly supportive, but withdrawal of the offending agent is critical to minimize hepatotoxicity. With the exception of acetaminophen overdose, no specific therapies exist.1-5

There are several types of environmental hepatotoxins. These include herbal preparations used as nutritional or health aids, contaminated food (fungicide-treated wheat), and household items such as pesticides or cleaning products. Occasionally, liver toxicity results when these toxins are ingested either as a form of drug abuse (inhalants) or as a suicide attempt.

As discussed for pharmaceutical agents, the mechanisms of hepatotoxicity of environmental toxins vary. Ingestion of poisonous mushrooms such as Amanita phalloides, results in fatty liver (steatosis) and hepatocyte necrosis that is often severe, rapidly progressive, and fatal.6 Venoocclusive liver disease has been reported with certain herbal teas, such as com-frey, taken as a nutritional supplement.7 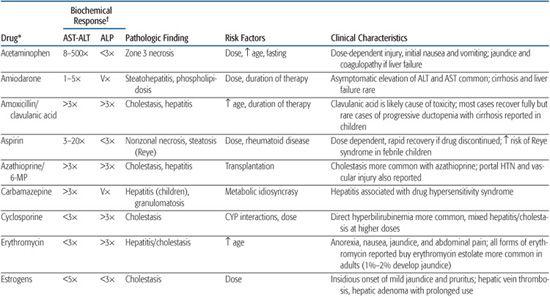 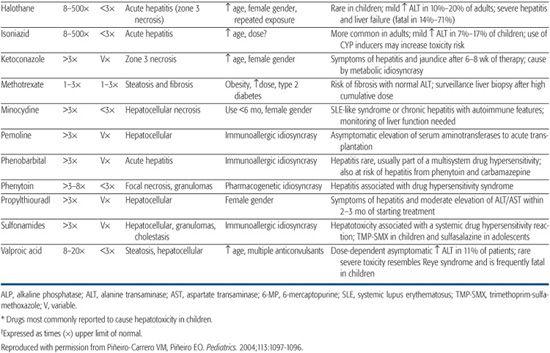 Treatment of liver toxicity secondary to environmental agents is comparable to that for drug-induced liver injury. Avoidance or withdrawal of the offending agent is crucial, and this usually depends on an accurate historical account. Therapy is usually supportive, but there are a few exceptions. Toxicity from iron overdose is treated with chelation therapy.