. Disorders of the Anterior Pituitary Gland

Disorders of the Anterior Pituitary Gland

The anterior pituitary gland is derived from invagination of ectodermal cells in the roof of the primitive oral cavity (stomodeal ectoderm), whereas the posterior pituitary gland (neurohypophysis) is derived from neural cells in the floor of the third ventricle. A group of homeobox genes encode multiple intracellular transcription factors and extracellular signaling peptides that direct temporal and anatomic development of the pituitary.1,2 The developing pituitary and hypothalamus are in close proximity, and their embryogenesis is codependent.

The pituitary gland is housed at the base of the brain in the sella turcica, a cavity of the sphenoid bone. The volume of the sella turcica is a good index of pituitary size and may be reduced in the child with pituitary hypoplasia or may be increased in some with PROP-1 defects or neoplasms. The anatomical proximity between the optic chiasm and the pituitary is important, since hypoplasia of the optic chiasm may occur together with hypothalamic/pituitary dysfunction in septo-optic dysplasia.9 Similarly, suprasellar growth of a pituitary tumor may initially manifest with visual complaints or evidence of decreased peripheral vision. 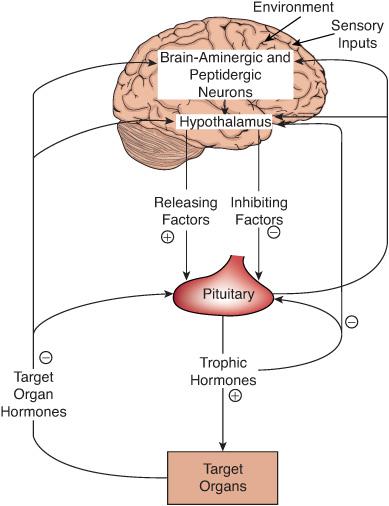 FIGURE 521-1. Brain-hypothalamic-pituitary-target organ axis. This schema depicts the complex regulatory interrelations among brain neurotransmitters and peptides, hypothalamic releasing and inhibiting factors, pituitary trophic hormones, and target organ hormones. Arrows indicate the avenues of regulation. Signs (+ or –) indicate whether the effect is stimulatory or inhibitory, respectively. Negative feedback of target gland hormones is illustrated by the arrows on the left. The short and ultra-short-loop negative feedback mechanism is illustrated on the right by the inhibitory effects of trophic hormones on secretions from the hypothalamus and anterior pituitary, respectively.

The anterior pituitary gland is composed of five major classes of differentiated secretory cells defined by the hormone that they predominantly synthesize. These hormones include the following:

2. Growth hormone (GH) and prolactin (PRL), which are related polypeptides.

3. Adrenocorticotropin hormone (ACTH), which is a polypeptide derived from the pro-opiomelanocortin (POMC) precursor molecule, which also gives rise to products such as melanocyte stimulating hormone, lipotrophic hormone, and β-endorphin.

In general, somatotropes (cells that secrete growth hormone) and mammotropes (cells that secrete prolactin) are the more numerous acidophilic staining cells. Corticotropes, thyrotropes, and gonadotropes exhibit basophilic staining. Somatotropes and lactotropes arise from the same precursor cell. Differentiation requires expression of at least two specific transcription factors, PIT-1 (also called POUIFI) and PROP-1. Defects in the regulation of somatotrope differentiation also cause TSH deficiency, indicating that thyrotrope differentiation and function are regulated in part by the same transcription factors. Gonadotropes and corticotropes differentiate by independent mechanisms, although children with PROP-1 gene abnormalities may have hypogonadotropic hypogonadism that is evident at puberty and ACTH deficiency that may appear even later in life.10

The pituitary hormones are synthesized as precursor molecules. Preprohormones, the products of mRNA translation, contain an amino terminal amino acid sequence called a leader or a signal sequence, which directs the protein to its intracellular sites of posttranslational modification and storage. The hormone is usually stored as a prohormone. During transport through the secretory pathway, precursor molecules are processed by various proteolytic cleavages into smaller proteins that usually are the biologically active substances.

GH stimulates RNA and protein synthesis in the liver and in many other tissues. GH binds to the extracellular domain of its specific receptor and initiates a sequence of molecular events leading to cellular action, e.g., synthesis of insulin-like growth factor 1.

Regulation of GH secretion is extraordinarily complex and includes a variety of endogenous diurnal rhythms and external influences, presumed to be mediated by the central nervous system and integrated by the hypothalamus. GH has a relatively short half-life in serum (20 to 25 minutes), and its release is pulsatile. Thus, random measurement is not useful in clinical settings. Large amounts of GH are normally released within 1 hour of the onset of deep sleep.14-45 Other surges occur 2 to 3 hours after eating and in response to vigorous exercise and physical and emotional stress.46 Each of these secretory bursts is probably mediated by hypothalamic release of GH-releasing hormone (GHRH), which is regulated by neurotransmitters emanating from higher central nervous system centers. Somatostatin (somatotropin-release inhibitory factor) is produced by the hypothalamus in response to influences such as hyperglycemia and elevation of free fatty acids, and it inhibits GH secretion. GH and IGF-I stimulate the hypothalamus to release somatostatin and thereby negatively feed back to inhibit GH release.

Among the proteins GH stimulates the synthesis of are the somatomedins. These mediate many of its growth-promoting effects15 and have similarities in structure and function to insulin, which has led to the contemporary use of the name insulin-like growth factors (IGF). IGFI and IGF-II circulate in serum and have structural homology (˜40%) with proinsulin. IGF-I synthesis is regulated at the transcriptional level by GH, so the blood levels of IGF-I vary depending on GH secretory status; they are low in hypopituitarism and high in acromegaly. IGFII is only partially dependent on GH. Its serum concentrations are decreased modestly in states of GH deficiency, but they are not elevated in acromegaly. Each IGF has insulin-like activities mediated primarily by the type 1 IGF receptor, although they do have some activity on the cell surface insulin receptor. 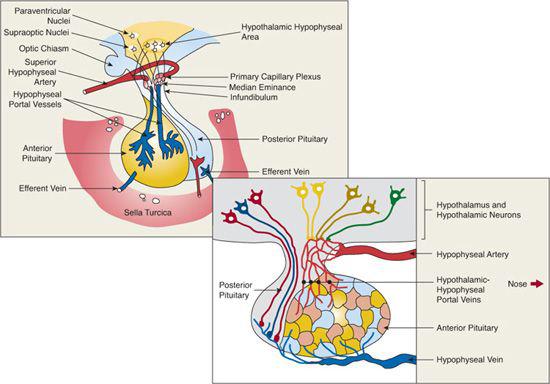