Two genetic defects are known in GABA catabolism (Fig. 141-1): the extremely rare, severe, and untreatable GABA transaminase deficiency, and the much more frequent and, to some extent, treatable succinic semialdehyde dehydrogenase (SSADH) deficiency.

Hyperekplexia is a dominantly inherited defect in subunits of the glycine receptor (α1 and β) and in the receptor-associated protein gephyrin. This disease is characterized by excessive startle responses, which are treatable with clonazepam. Mutant GABAA receptor γ-2 subunit causes absence epilepsy and febrile seizures.

Nine defects have been reported in the metabolism of monoamines (Figs. 141-2 and 141-3): five in the synthesis of the cofactor tetrahydrobiopterin, tyrosine-hydroxylase (TH) deficiency, aromatic amino acid decarboxylase (AADC) deficiency, dopamine β-hydroxylase (DBH) deficiency, and monoamine oxidase A (MAO-A) deficiency. All are associated with neurological symptoms except DBH deficiency (orthostatic hypotension). With the exception of MAO-A deficiency, they are more or less efficiently treatable.

GABA transaminase deficiency was reported in 1984 in a brother and sister from a Flemish family. No other patients have been reported. The siblings showed feeding difficulties from birth, often necessitating gavage feeding; profound axial hypotonia; and generalized convulsions. Hyperreflexia was present during the first 6 to 8 months. Psychomotor development was nearly absent. Growth acceleration was present from birth, due to growth hormone hypersecretion. Postmortem examination of the brain showed spongiform leukodystrophy.

The CSF and plasma concentrations of GABA, GABA conjugates, and β-alanine were increased due to a decrease of GABA transaminase activity. β-alanine is an alternative substrate for GABA transaminase, which explains its increase in this disease.

The diagnosis requires amino acid analysis of the CSF. Since free GABA CSF levels are low, sensitive techniques must be used, such as ion-exchange chromatography with fluorescence detection or a stable isotope dilution technique. Enzymatic confirmation is obtained using lymphocytes, lymphoblasts, or liver. Prenatal diagnosis is possible by enzymatic analysis of chorionic villus tissue, not of amniocytes.

No efficient treatment is available. The siblings died at the ages of 1, 2, and 7 years.1 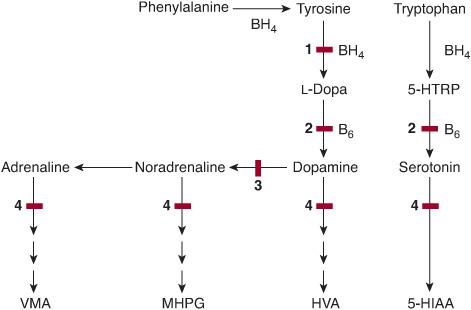