Bone and joint infections may occur at any age but are more common in children than adults. Optimal management requires early diagnosis and aggressive initial treatment to prevent disabling sequelae. This is usually best achieved with care being provided by a multidisciplinary team of pediatricians and orthopedic surgeons experienced in the specific issues encountered in care of growing children. Soft tissue infections occur more frequently than skeletal infections but they are generally simpler to diagnose and treat with antibiotic therapy. This chapter reviews the approach to diagnosis and management of these disorders in children.

Acute hematogenous osteomyelitis (AHO) is a disease of young children. The majority of cases occur before 5 years of age with up to one third occurring in children younger than 2 years of age.1,2 There is a male predilection, with males outnumbering females in most published series by approximately 2:1.1-5 However, in a more recently published series, males accounted for 52% of the patients.6 There is frequently a history of some type of minor blunt trauma2,7 or intercurrent illness, such as an upper respiratory tract infection.8 Other risk factors for AHO include immunodeficiency states, sickle cell anemia, and indwelling vascular catheters. In some areas of the United States, the incidence of osteoarticular diseases including AHO has increased with the emergence of community-associated methicillin-resistant Staphylococcus aureus (CA-MRSA).6

The majority of bone infections in children are of hematogenous origin.2 The vascular anatomy of long bones in children underlies the predilection for localization of blood-borne bacteria. In children, unlike in adults and young infants, the blood supply of the epiphysis is separate from the metaphysis.10 The nutrient artery to the metaphysis empties into a system of venous sinusoids in which sluggish flow presumably facilitates deposition of bacteria. During the cellulitic phase of acute osteomyelitis infection originates on the venous side of the system and then spreads to the nutrient artery, causing thrombosis of the nutrient artery.9 The resultant ischemia prevents host defense mechanisms from reaching the area and allows bacterial proliferation. Formation of an abscess can then occur which can rupture into the subperiosteal space with subsequent elevation of the periosteum, which is loosely adherent in children. If infection is uncontrolled, purulent material may extend up and down the diaphysis and circumferentially around the bone (see Figure 234-1). In areas in which the metaphysis is intra-articular, such as the hip and shoulder, the intraosseous abscess may rupture into the joint resulting in septic arthritis.9 In newborns and young infants, blood vessels connect the metaphysis and epiphysis, and rupture of pus into the adjacent joint space is more common.2,11

Thrombosis of blood vessels and elevation of the periosteum deprive the bone of its blood supply, resulting in necrosis, which can be extensive without early surgical drainage. Left untreated, granulation tissue forms around the dead bone, which separates from live bone and becomes a sequestrum. New bone growing around the dead bone is called an involucrum. Sinus tract formation occurs in the involucrum allowing pus to escape and eventually form sinus tracts through the skin. The involucrum is mechanically weak and may become the site of pathologic fractures.

Etiologic Agents The predominant organism in acute hematogenous osteomyelitis in all age groups is Staphylococcus aureus, accounting for 50% to 90% of cases.17,18 In recent years, CA-MRSA has emerged as a significant pathogen in AHO.6,17,19

Streptococcus pyogenes osteomyelitis accounts for approximately 10% of cases of acute hematogenous osteomyelitis (AHO) with a higher incidence in preschool and early school-aged children.21,22Streptococcus pneumoniae has been isolated as a cause of AHO in children less than 3 years of age.22-24 The use of the pneumococcal PCV-7 will likely reduce the incidence of this pathogen as overall pneumococcal invasive disease has decreased since the introduction of this vaccine.25

Kingella kingae, a gram-negative organism that may colonize the respiratory tract, is being increasingly recognized as an important pathogen in osteoarticular infections in children younger than 2 years of age. Rates ranging up to 50% in this age group have been reported in some series.26,27 Osteoarticular infections caused by this agent are, not surprisingly, often preceded by upper respiratory tract infections. The clinical course is less aggressive than that seen with other bacteria, causing fewer symptoms and minimal bone destruction. 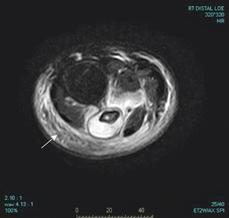 Streptococcus agalactie and gram-negative organisms occur almost exclusively in neonates. Salmonella is the most common organism isolated in patients with sickle cell anemia with osteomyelitis.29Pseudomonas infections are usually a result of puncture wounds to the feet. Anaerobic, gram-negative, and polymicrobial infections can result after puncture wounds or open fractures. Haemophilus influenzae type B, an important pathogen in older series, is now rarely seen in countries that routinely use the H influenzae conjugate vaccine. Less common organisms causing osteomyelitis include Bartonella henselae (the organism of Cat Scratch Disease), Brucella, and Mycobacterium tuberculosis.

Early signs of skeletal infection may be subtle, especially in the neonate who typically does not appear ill.9,12,13 One of the earliest signs of osteomyelitis in infants is failure to move the affected extremity (pseudoparalysis), pain on passive movement, or both.1 Older children frequently present with fever, pain at the site of infection, and refusal to use the affected extremity.3,4 Nonspecific constitutional symptoms can occur but are not prominent. There is intense tenderness over the metaphysis of the bone on palpation, and muscles of the adjacent joint are frequently in spasm. The joint is held in a position of comfort, usually mild flexion, but to a lesser degree than with septic arthritis.9 Soft tissue changes of swelling, erythema, and heat are generally late findings in osteomyelitis. After several days, a sympathetic sterile effusion may occasionally form in a nearby joint, presenting a problem in differentiation from septic arthritis.9 It is imperative for the evaluating physician to remember that any infant or child with fever and failure to bear weight or use an extremity needs to be evaluated for potential musculoskeletal infection.

The differential diagnosis of osteomyelitis includes cellulitis, septic arthritis, pyomyositis, malignancy, collagen vascular disease, and trauma. In differentiating cellulitis from bone infection, tenderness disproportionate to physical findings suggests osteomyelitis. Septic arthritis may be differentiated from osteomyelitis by its more discrete joint findings and its greater degree of joint immobility, in addition to a lack of metaphyseal tenderness.16 History, clinical scenario, and radiologic studies are helpful in differentiating skeletal infection from other diagnoses. Recovery of the causative organism is best obtained by biopsy or aspiration, which not only establishes the diagnosis, but also facilitates susceptibility testing and rules out other pathologic processes.

Neonatal Osteomyelitis Diagnosis of osteomyelitis in an infant who is less than 1 month of age requires a high index of suspicion. Young infants with bone infections often lack fever and other systemic signs of illness.1,30 Symptoms may be confined to failure to move an extremity and fussiness.2 Predisposing factors include prematurity, preceding infection, bacteremia, exchange transfusions, and the presence of intravascular catheters.30-32S aureus, group B streptococcus, and enteric gram-negative bacteria are the most common etiologic agents.31,33 Candida must also be considered, especially in the premature infant who has had previous antibiotic therapy and placement of intravascular catheters.34,35 Neonates are more likely to have multifocal disease and decompression of pus into the adjacent joint resulting in an associated septic arthritis.30

Pelvic osteomyelitis often presents a diagnostic dilemma. Most patients present with fever, limp or refusal to bear weight, and pain that seems to be localized to the hip, groin, or buttocks.36-38 Initial diagnostic impressions often include intraabdominal pathology, other intrapelvic problems, and septic arthritis of the hip joint. In these cases, imaging studies such as bone scans, MRI, or computerized tomography (CT), may be particularly helpful in establishing the diagnosis.

Osteomyelitis in the Child with Sickle Cell Anemia

Aseptic bone infarcts are common in children with sickle cell disease. The signs, symptoms, and radiographic changes mimic those of acute osteomyelitis, making differentiation between the diagnoses difficult. Neither bone scan nor MRI reliably discriminates between the two conditions.39-41 Ultrasonography has been reported as a method assisting in differentiation between infarction and infection.42,43 Diagnostic aspiration of the site should be done in an attempt to recover the organism and confirm the diagnosis. Salmonella species, followed by S aureus, are the most frequent causes of bone infection in the sickle cell patient.29,44 Aggressive surgery and prolonged parenteral therapy may be necessary for treatment of osteomyelitis in the child with sickle cell disease.

Vertebral osteomyelitis and discitis are two entities that may present similarly with patients complaining of back pain, limp, or refusal to bear weight. Vertebral osteomyelitis accounts for 1% to 2% of osteomyelitis in children. It is seen in older children and adolescents who are usually febrile on presentation and may have had symptoms for several weeks or months. The lumbosacral area is most commonly involved.45Staphylococcus aureus is the predominant organism isolated. Discitis is seen more frequently in children less than 5 years of age where blood supply to intervertebral discs is rich. These patients are seldom ill appearing, and fever is uncommon.45

Plain radiographs may show narrowing of the intervertebral space with destruction of vertebral endplates in discitis. Destruction of the vertebrae is seen in vertebral osteomyelitis, but findings may not appear until later in the disease course. MRI has become the modality of choice to differentiate one entity from the other.

Figure 234-2 outlines an approach to the diagnosis and management of a patient with suspected acute hematogenous osteomyelitis. No specific laboratory test for the diagnosis of osteomyelitis exists, with the exception of isolation of a pathogen from bone.

These procedures are usually performed by an experienced orthopedic surgeon, or interventional radiologist. Bone cultures are positive in 38% to 91% of cases and confirm the diagnosis.1,7,14,15 Blood cultures are very useful, demonstrating the organism in 30% to 76% of cases.3,47 The highest diagnostic yield occurs when both blood and bone specimens are submitted for culture. Recovery of organisms is enhanced by inoculating the bone aspirates into blood culture bottles. This is particularly important when fastidious organisms such as Kingella are suspected which may require up to a week of incubation before being evident.48 Alternatively, bone or joint aspirates can be submitted for amplification of 16SrRNA and specific real-time PCR (for Kingella) when trying to establish a diagnosis in culture-negative osteomyelitis.26,28,49 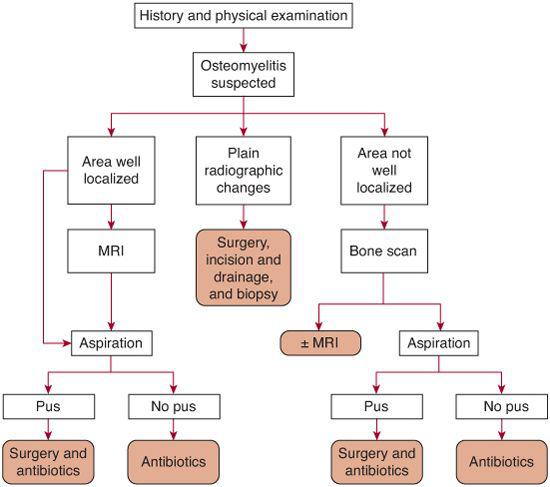