Many hemorrhagic disorders in children are caused by genetic defects, but there are also a number of important acquired conditions that can lead to abnormal coagulation and subsequently bleeding complications. The most important of these conditions are vitamin K deficiency bleeding, coagulopathy of liver failure, and disseminated intravascular coagulation (a condition that can lead to both bleeding and thrombosis).

In 1894, Charles Townsend described 50 newborns who developed severe bleeding complications shortly after birth and coined the term hemorrhagic disease of the newborn” (HDN).1In 1936, Henrik Dam discovered a fat soluble “koagulation factor” (using the German spelling), which he named vitamin K and which was found to be deficient in neonates suffering from HDN.2 Thus the term hemorrhagic disease of the newborn has been replaced by vitamin K deficiency bleeding, as this term is more specific and descriptive. This discovery led to the use of prophylactic vitamin K, which has become routine in the immediate perinatal period and is very effective at preventing HDN.

Vitamin K deficiency bleeding (VKDB) is classified as early, classical, or late (see Table 437-1). Early onset occurs in the first 24 hours of life and is due to the cross-placental transfer of compounds that interfere with vitamin K metabolism or function, including some anti-convulsant drugs, antibiotics, antituberculous agents, and vitamin K antagonists. Classical VKDB as described by Townsend occurs in the first week of life and is due to a physiological deficiency in vitamin K at birth combined with a lack of vitamin K in breast milk or inadequate feeding. Vitamin K prophylaxis has its biggest impact in preventing this type of VKDB. Late onset VKDB can occur at any age, although it is classically described as occurring between 2 weeks and 6 months of age

Prior to the widespread use of vitamin K prophylaxis, the incidence of classical vitamin K deficiency bleeding (VKDB) was reported to be as high as 1.5%, but the condition is now considered rare.

The reduction in functional coagulation factors can be easily measured by screening coagulation tests such as prothrombin time and activated partial thromboplastin time and by assaying the specific factors individually.

The clinical features of vitamin K deficiency bleeding (VKDB) are similar to other coagulation disorders. The typical presenting symptoms are bruising (Fig. 437-1), mucous membrane bleeding, excessive bleeding associated with trauma or invasive procedures, or signs of internal hemorrhage such as abdominal pain, headache, or vomiting.

The most common disorder that can be mistaken for VKDB is liver disease–associated coagulopathy, as both result from deficiencies of some of the same clotting factors. The vitamin K–dependent factors II, VII, IX, and X are all synthesized in the liver and are deficient in both conditions. Thus, the prothrombin time, activated partial thromboplastin time, and specific measurement of these factors will not distinguish the 2 conditions. Moreover, the 2 conditions can coexist as liver dysfunction resulting from obstructed biliary flow, that can lead to vitamin K deficiency. Another condition that can be confused with VKDB is an inherited deficiency of all the vitamin K–dependent clotting factors due to 1 of several mutations in enzymes in the metabolic pathways involving the synthesis of the vitamin K–dependent factors.3,4 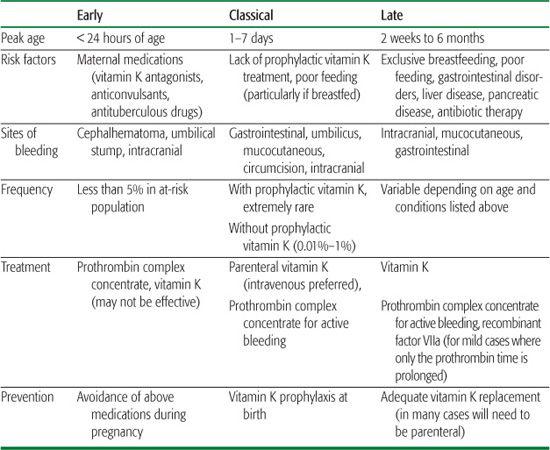 Patients suspected of having vitamin K deficiency bleeding (VKDB) should have a complete blood count (CBC) to assess the platelet count and prothrombin time (PT) and activated partial thromboplastin time (aPTT) tests to screen for deficiencies of specific clotting factors. The PT is always prolonged, often to a very significant degree, and the aPTT is usually increased as well.

Simply repeating the PT and aPTT tests several hours after administration of parenteral vitamin K will demonstrate near or complete correction of both test results. Measuring factor levels (specifically factors II, VII, IX, and X) may assist in the diagnosis, but is not usually necessary and may delay instituting appropriate therapy (vitamin K replacement).

Management of vitamin K deficiency bleeding is relatively straightforward, and often treatment will have begun prior to confirmation of the diagnosis. When therapy has not been instituted as part of the diagnostic evaluation, administration of vitamin K should be given immediately upon recognition of the disorder. Early intervention may prevent catastrophic hemorrhage.

Several aspects of therapy must be taken into consideration. These include the formulation of vitamin K and the route of administration. Currently, available treatment is generally with vitamin K1 (also known as phytonadione), which can be administered parenterally via intravenous, intramuscular, and subcutaneous injection or orally; intravenous administration is recommended in the acute setting. There is a clear advantage to parenteral administration since it results in a more rapid rise in factor levels than the oral route. Second, the enteral route is not entirely reliable, especially in late-onset vitamin K deficiency bleeding where poor absorption may have led to the condition in the first place.

Although the effect of parenteral vitamin K is rapid, it is not instantaneous, and it takes several hours to correct the factor deficiencies. Thus, in a patient with severe hemorrhage, additional therapy aimed at immediate correction of these factor deficiencies is required using a plasma-derived product known as a prothrombin complex concentrate (PCC). PCCs contain factors II, VII, IX, and X, and immediately following infusion will correct these factor deficiencies. Such treatment is not in lieu of vitamin K but only to provide immediate replacement of the deficient factors. If PCCs are not available, fresh-frozen plasma is an alternative; because repeated administration is necessary, volume overload is a risk, and fresh-frozen plasma requires some processing time, including thawing. Administration of recombinant activated factor VII can be considered in cases of life-threatening bleeding.