The abdominal mass in an infant or child is most commonly an incidental finding first observed by a parent or at the time of a pediatric screening examination. Over 50% of abdominal masses detected by physical examination are actually cases of organomegaly.1,2 The remaining 43% of masses require surgical evaluation and comprise neoplasms, developmental anomalies, and inflammatory or infectious disease. Ninety percent of this group are retroperitoneal masses, approximately half of which derive from the urinary tract.2 In neonates, multicystic dysplastic kidney and hydronephrosis occur in equal frequency and comprise 75% of abdominal masses.2 Older children are more likely to have neoplastic processes.2Table 388-1 lists the most likely diagnoses that vary by location of the mass and age group.

Most masses are asymptomatic, so the history is rarely diagnostic. Signs and symptoms concerning for malignancy include increased abdominal girth, associated abdominal pain, pain with movement or palpation, constipation, or change in pattern of urination.1 Other helpful elements in the history include signs or symptoms of intestinal obstruction, jaundice, fever, and weight loss. The approximate location of the mass; its mobility, size, and consistency; and any associated developmental anomalies should be noted on physical examination and may be helpful when discussing initial imaging modalities with the radiologist. Ultimately, the age of the patient and physical examination findings narrow the differential diagnosis prior to radiologic imaging. 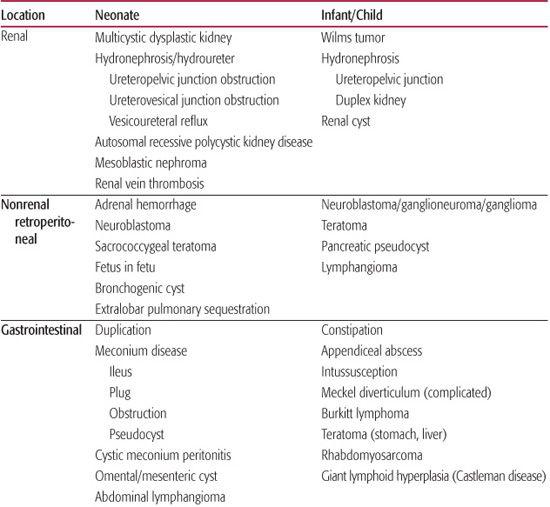 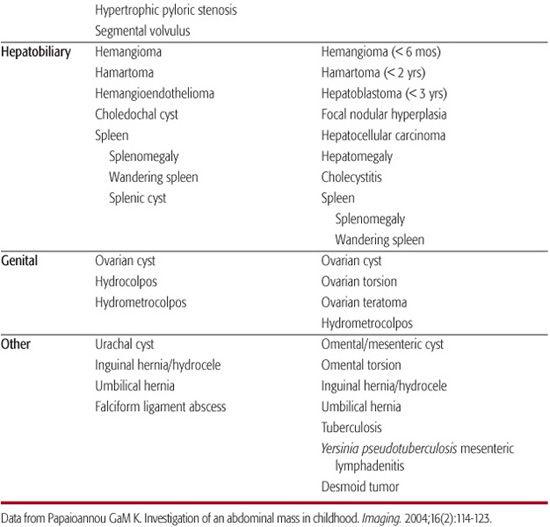 The radiologic evaluation of the neonatal abdominal mass should begin with abdominal plain films to rule out gastrointestinal obstruction. In contemporary practice, an increasing number of neonatal masses are discovered on prenatal maternal ultrasound. If an obstructive pattern is seen, an upper gastrointestinal series should be obtained to rule out malrotation and volvulus. In the absence of an obstructive pattern, ultrasound is a very useful noninvasive imaging modality in the neonate.3 Ultrasound can be completed without sedation and does not expose the child to ionizing radiation. Resolution provided by modern studies allows for description of origin, vascular supply, calcification, homogeneity, and cystic or solid nature of the mass.1,4-6 The incidence of radiation-induced cancer is increased to approximately 1:1200 with a single computed tomography (CT) scan of the abdomen. When coupled with a 20-fold increase in the number of CT scans ordered in the last 25 years, this poses a substantial risk to the pediatric population.7-9 Magnetic resonance imaging (MRI) provides similar axial anatomic information and is preferred to evaluate midline masses, which may involve the spinal canal or invade vascular structures. However, in the neonatal population, this study requires general anesthesia.

In older infants and children, ultrasound should be attempted first in the absence of apparent intestinal obstruction. The origin of a very large abdominal mass is unlikely to be resolved on axial imaging and will likely require surgical exploration and biopsy. CT scan is most helpful in older children with nondiagnostic ultrasound or for staging tumors. In the case of hepatic tumor, MRI provides much more diagnostic information.3,4,10 Adjunctive laboratory tests are often helpful in differentiating tumor types in older children.1 These may include serum or urine catecholamines, β-human chorionic gonadotropin (α-HCG), α-fetoprotein (AFP), and other relatively specific markers as well as general tests of renal, hepatic, and other physiologic states (Table 388-1).

Neonatal oncologic lesions are further discussed in Chapter 447. Renal masses are the most common causes of flank masses in neonates and include hydronephrosis and multicystic dysplastic kidney. Multicystic dysplastic kidney is believed to result from renal outflow obstruction in utero. Its ultrasonographic features include abnormal contour of the kidney and the presence of multiple disconnected cysts throughout the organ. The presence of a single cyst in a neonatal kidney is most likely an obstructed unit of a duplex system.11,12 Bilateral renal involvement with diffuse cystic changes is most likely autosomal recessive polycystic kidney disease, a severe progressive course of renal failure requiring dialysis and eventual transplant (see Chapter 470). Hydroureter, ureterocoele, and caliceal dilation do not accompany any of the previously mentioned diagnoses and should prompt careful evaluation of the collecting system with a voiding cystourethrogram to assess ureterovesical junction obstruction, vesicoureteral reflux, or ureteropelvic junction obstruction (see Chapter 476). A solid mass in the kidney of a newborn is most likely mesoblastic nephroma, a tumor resembling Wilms tumor with excellent prognosis (95% benign). These tumors show concentric rings of echogenicity on ultrasound and should be removed.6 Renal vein thrombosis may result from dehydration or low flow state and is evident as a congested kidney with an incompressible renal vein and lack of flow on Doppler examination.12

Perirenal masses such as adrenal hemorrhage and adrenal neuroblastoma are relatively uncommon in newborns and can be followed with serial ultrasound to discriminate them. Additionally, 90% of neuroblastoma tumors secrete measurable urinary catecholamines.6Fetus in fetu is an extremely rare abnormality with a partially developed twin enveloped in the retroperitoneum. Plain films and ultrasound demonstrate intact skeletal elements, and removal can be a surgical challenge.

Sacrococcygeal teratoma is the most common abdominal neoplasm in neonates, affecting 1 in 35,000 live births.2 In utero, this lesion can be found on screening ultrasound. It can lead to significant arteriovenous shunting, hydrops, and fetal demise. This germ cell tumor is classified into 4 groups based upon abdominal and extrapelvic position, and classification correlates with malignant potential (see Chapter 459). Approximately 85% of these tumors have an external portion that is readily visible at the base of the coccyx on physical examination. These are easily diagnosed at birth and are relatively favorable in terms of malignant risk. Those with little or no exophytic component may be delayed in diagnosis, presenting with rectal or urinary obstruction in a toddler. These are likely to be malignant when discovered. Determining the intra-abdominal extent and anterior involvement once detected is critical to surgical planning and is best delineated with MRI. The presence of a sacral mass should be investigated in any neonate with imaging that depicts a sacral bony abnormality.

Other intra-abdominal masses include gastrointestinal tract abdominal masses in neonates that are uncommon, such as meconium disease, mesenteric cyst, and abdominal lymphangioma. Hypertrophic pyloric stenosis presents with a mass, but the typical history generally allows straightforward diagnosis (see Chapter 398). Palpable pelvic masses in young female babies should prompt an inspection of the vagina to look for cause of hydrocolpos or hydrometrocolpos. Additionally, an ultrasound of the uterus and adnexa should be performed. Ovarian cysts are relatively common in neonates, routinely noted on prenatal ultrasound, and are rarely malignant. The loss of maternal hormonal influence on the baby’s ovaries results in spontaneous regression of most cysts by 6 months of age, and these can generally be followed with ultrasound. Failure of regression by 6 months, complex cysts, necrotic cysts, or any solid ovarian mass should receive prompt surgical evaluation and removal.

Hepatobiliary masses in the neonate include hemangioma (most common), hamartoma, and, rarely, hepatoblastoma (see Chapter 458). Following an initial ultrasound, MRI and serum tumor markers provide the most information. In cases of uncertain diagnosis, surgical biopsy may be completed. Choledochal cysts are congenital bile duct malformations that place children at markedly increased lifetime risk of cholangiocarcinoma as well as infection, obstruction, biliary stone formation, and acute pancreatitis. These cysts require excision and may be a cause of persistent conjugated hyper-bilirubinemia (see Chapter 427).

Masses in Infants and Children

Stool in the colon is the most frequently palpated abdominal mass, particularly in the toddler and preschool-aged child. Wilms tumor and neuroblastoma are the most common solid abdominal tumors in children beyond infancy (details of diagnosis and management are provided in Chapters 456 and 457). Wilms tumor is the most common solid tumor in the first year of life2,4 and is the most common abdominal malignancy in children. Wilms tumor typically presents between 1 and 5 years of age. Neuroblastomas generally arise from the adrenal gland or paraspinal ganglia. They are the most common neoplasms that cause abdominal enlargement in childhood overall.13 Median age at diagnosis of neuroblastoma is 22 months, and 90% of newly diagnosed cases are under 5 years of age.1 Ultrasound or MRI of neuroblastoma demonstrates calcium and often encasement of major abdominal vessels, including the aorta, celiac, and superior mesenteric arteries.13 Wilms tumor typically displaces rather than envelopes major vessels and rarely calcifies (15%).13 Because 90% of neuroblastomas secrete catecholamines, measurement of urinary catecholamines and/or metabolites is useful for most patients with an undiagnosed abdominal mass. Axial imaging of some type is required for neuroblastoma staging, and liver function tests are a useful screening study.

Masses within the liver should prompt careful history regarding recent illness and travel. Initial evaluation with ultrasound will differentiate abscess from tumor. Liver tumors are discussed in detail in Chapter 458. MRI allows narrowing of the differential diagnosis on the basis of radiologic characteristics. Mesenchymal hamartoma of the liver is a developmental lesion, often cystic or mixed solid/cystic, presenting in patients under 2 years of age with hepatomegaly or right upper quadrant mass. Both ultrasound and MRI demonstrate simple cysts without debris. Hepatoblastoma is the most common primary malignant hepatobiliary tumor in children. Children typically present at between 18 and 24 months. Serum α-fetoprotein is often elevated and thus should be obtained in all children with a liver mass. MRI is less helpful in differentiating this tumor from a hemangioma, occasionally requiring surgical biopsy for definitive diagnosis and treatment. Hepatocellular carcinoma typically occurs in older children, with peak incidences at ages 2 to 4 and 12 to 14 years of age. It is the second-most common primary malignancy of the liver. Approximately half of these children have intrinsic liver disease (hereditary tyrosinemia, biliary atresia, Alagille syndrome, hepatitis).

Pelvic masses in females should prompt vaginal examination. Hydrometrocolpos may be present in postmenarcheal females with imperforate hymen. Ovarian masses in girls are neo-plastic in 64% of cases.14 Initial evaluation of a pelvic mass should begin with an ultrasound study. Simple cysts in children under 1 year of age should be monitored with ultrasound every 3 months, as outlined previously. Larger cysts that do not resolve by 1 year of age should be removed surgically with preservation of the ovary (cystectomy or fenestration). In the event of pain accompanying an ovarian mass, prompt surgical assessment should be obtained to correct ovarian torsion and salvage the ovary if possible. Solid or mixed-consistency masses are worrisome for malignancy, particularly if larger than 8 cm, and should prompt surgical consultation. The differential diagnosis includes both germ cell and epithelial neoplasms. Staging chest and abdominal CT scan, β-human chorionic gonadotropin, α-fetoprotein, and CA-125 levels should be obtained as diagnostic markers for germ cell tumor and epithelial cancer of the ovary (see Chapter 459). In the case of precocious puberty preoperative follicle-stimulating hormone, luteinizing hormone, estradiol, and lactate dehydrogenase levels should be obtained.