Not all children who collapse will proceed to a full respiratory or cardiac arrest. Causes of sudden collapse in children are listed in the box and many of these are discussed in detail in Chapters 40 and 57. However, if basic life support is not provided urgently, a collapsed child may progress to cardiorespiratory arrest, often due to failure to maintain an open airway.

Cardiac arrest is the end-point of severe respiratory or cardiac failure that has either been overwhelming or has not been adequately treated. Cardiorespiratory arrest outside hospital requires rapid basic life support until skilled help arrives. In hospital, arrest should be managed by a skilled resuscitation team. As most cardiorespiratory arrests in children are secondary to hypoxia rather than due to cardiac disease it is crucial to achieve a patent airway and adequate oxygenation using high-flow oxygen and artificial respiration and where necessary (e.g. asystole or severe bradycardia) to circulate this oxygen by use of cardiac massage.

Establishing an Airway and Artificial Ventilation

The airway should be opened by lifting the chin and tilting the head back to a ‘sniffing the air’ position. In infants the head should be in the neutral position. If there is a possibility of cervical spine injury then the airway should be opened by the ‘jaw-thrust’ method, while a helper supports the cervical spine. The airway should then be cleared by removing any vomit or secretions with suction. Artificial ventilation can be given by mouth to mouth or in infants by mouth to mouth and nose. After five rescue breaths check for signs of circulation (i.e. moving, normal breathing, coughing or presence of a central pulse). If there are no signs of life then commence cardiac massage.

Children are at high risk of obstructing their airway with a foreign body. This is partly due to their nature (toddlers putting small objects in their mouths, older children throwing food in the air or sucking on pen-tops) and partly due to the small size of the airway and the anatomy. A child’s airway is conical, with the narrowest part at the cricoid ring, so objects tend to lodge in a position where they can cause complete airway obstruction. This leads to sudden onset of choking, cyanosis and collapse. Choking should be managed by encouraging coughing or in the unconscious child by opening the airway, removing any visible obstruction and performing alternating back blows and chest/abdominal thrusts to expel the obstruction. Abdominal thrusts (the Heimlich manoeuvre) should not be attempted in infants because of the risk of trauma to the liver and spleen; instead, perform five alternate back blows and chest thrusts with the child held in a head-down position. If these measures are unsuccessful ventilation will be required via an emergency tracheostomy or crico-thyroidotomy. 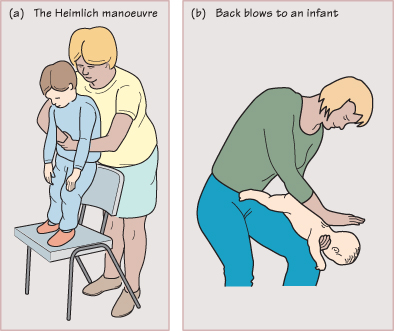 In infants cardiac massage can be achieved by encircling the chest with both hands and compressing the lower third of the sternum with the thumbs. In young children the heel of one hand is used and in older children two hands are used. A ratio of 15 compressions to 2 breaths is used for all ages except newborn infants, where the ratio is 3 : 1.

If these measures are not effective then drugs such as adrenaline (epinephrine), sodium bicarbonate and a fluid bolus may be necessary, depending on the cause of the cardiac arrest. Adrenaline can be given via the intravenous or intraosseous routes. Endotracheal adrenaline should only be used if intravenous or intraosseous access is impossible, as the evidence for efficacy is not good. Defibrillation is very rarely required in paediatric cardiac arrests, but is indicated for certain cardiac arrhythmias such as ventricular fibrillation, ventricular tachycardia and supraventricular tachycardia unresponsive to drug therapy. Life-threatening cardiac arrhythmias are more common in children with congenital heart disease (postoperatively), drug ingestion (e.g. overdose of a tricyclic antidepressant) and in those with a long QT interval on the ECG. 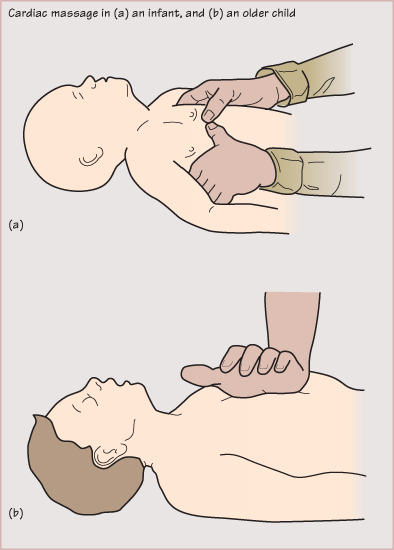 Focal Points for the Assessment of the Collapsed Child 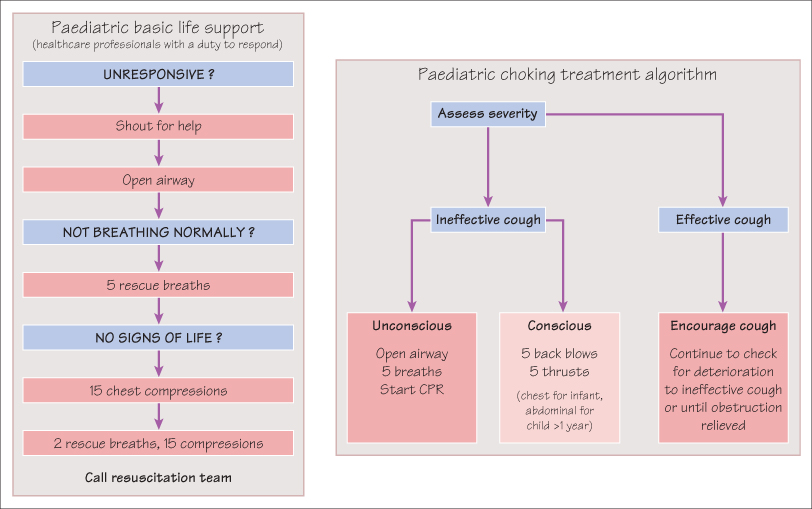 Tags: Paediatrics at a Glance
Jul 2, 2016 | Posted by admin in PEDIATRICS | Comments Off on The collapsed child
Premium Wordpress Themes by UFO Themes
WordPress theme by UFO themes