Anatomy of the male reproductive tract and fine structure of the rete, epididymis and vas deferens

The internal structure of the testes

The testes are oval structures of 3.3–5.5 cm in length and 2–3 cm wide giving a normal volume of 15–30 ml. Testicular volume is important as any reduction in the mass of tissue producing spermatozoa may result in a reduced sperm count. The volume is measured by means of an orchidometer. The testes lie in the scrotal sac outside the body cavity. The reason for this is that spermatogenesis requires a temperature that is 1.5–2 degrees C below core body temperature in order to proceed. It is common to find reduced sperm counts in men whose testes are overheated for significant periods of the day (for example, long-distance lorry drivers). The testes are very vascular and well innervated.

One of the main adaptations to improve the chances of fertilisation is to produce spermatozoa in very large numbers and much of the structure of the testes is designed to facilitate this. Internally, the testes are divided into a number of lobules, each of which is filled with coiled seminiferous tubules: these tubules make up 90% of the internal structure. The seminiferous tubule is the site of sperm production and the immense coiling permits the largest surface area to be contained in the smallest volume. The tubules lead to an area on one side called the rete. Here, the contents of many tubules are mixed and the number of tubes gradually reduces as they join together in the rete to become a single tube in the epididymis. The epididymis acts as a storage and maturation area and leads to the outlet to the penis, the vas deferens.

The tubules are lined with columnar endothelial Sertoli cells between which spermatogenesis takes place. The space between adjacent tubules is filled with blood and lymphatic vessels, Leydig cells and interstitial fluid. On the basement membrane between each pair of adjacent cells lie the gamete progenitor cells, the spermatogonia, which are equivalent to the oogonia in the ovary. Similarly to the oogonia, the spermatogonia are laid down during fetal life; however, in contrast to the oogonia, new progenitor cells will be made throughout reproductive life to give an inexhaustible supply.

As in the ovary, the basement membrane provides protection from blood‐borne contaminants and encloses an avascular region. The passage of hormones and nutrients necessary for the energy-demanding process of spermatogenesis, therefore, all occurs via the interstitial fluid. The volume of interstitial fluid within the testes is very high; such a volume would be considered oedemic in any other tissue. In addition to the basal lamina, there is also a second protective barrier in the testes, called the tight junction.

The changes in cell morphology during the development of spermatogonia into a mature spermatozoon are illustrated in Figure 30.2A. Spermatogonia lie on the basement membrane of the seminiferous epithelium. Following puberty, as gonadotrophins rise, every 16 days there is a wave of mitotic division of the spermatogonia into primary spermatocytes or daughter spermatogonia. The daughter spermatogonia remain on the basal lamina and keep the pool replenished, whereas the primary spermatocytes are committed to starting development into spermatozoa. The primary spermatocytes still possess a diploid number of chromosomes. These cells must divide meiotically to form secondary spermatocytes possessing 23 chromosomes. Just before meiosis, the tight junction between the Sertoli cells parts and allows the spermatocytes to move from the basal (outside) to the adluminal (inside) compartment, then closes again. These tight junctions prevent molecules and cells passing into the intercellular spaces. This means that all molecules passing to the spermatocytes must pass through the blood–testes barrier or be secreted into the adluminal space by the Sertoli cells. Note that once meiosis has taken place, the haploid germ cells are ‘foreign’, so the blood–testes barrier isolates the germ cells from the rest of the body (including circulation) and protects them from attack by the immune system. In addition, it allows the haploid germ cell to exist within the adluminal compartment in a different and unique ionic microenvironment, with especially high levels of certain amino acids, peptides, steroids and sugars that are required for germ cell production. 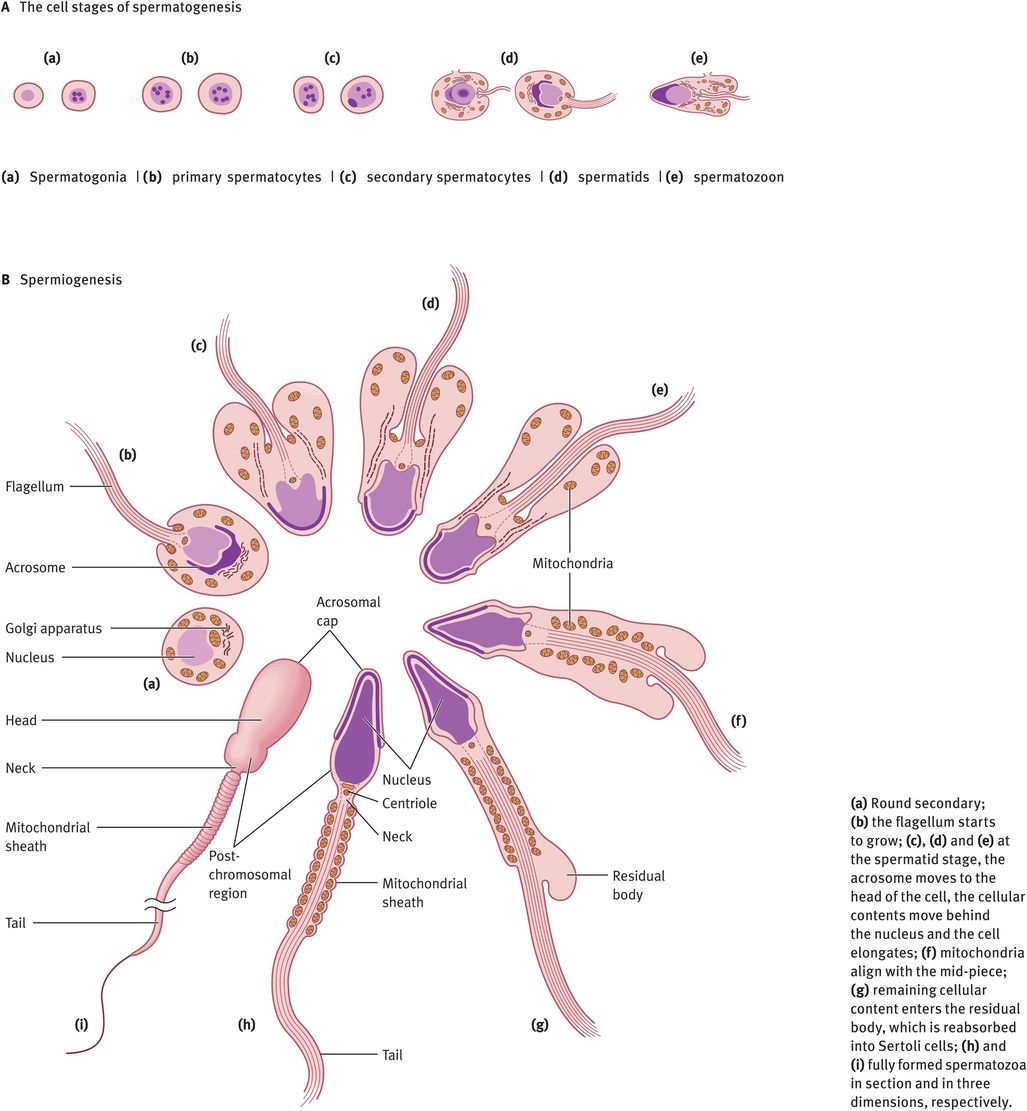 Two meiotic divisions occur with doubling of the chromosomes in between to give first two secondary spermatocytes and then four spermatids, each containing 23Y or 23X. This results in a great reduction in cytoplasmic volume and each spermatozoon containing half of the DNA of its parent. At this point, the genetic constitution of each spermatozoon will also be different, as crossing over has occurred during meiosis. In order to retain access to all DNA for all cells, the new secondary spermatocytes and spermatids remain connected by a syncytium, a membrane that encompasses the four spermatozoa. This breaks when the spermatozoa leave the space between the Sertoli cells.

At this point, the spermatozoon is still a rounded cell and it must undergo the most remarkable cellular transformation to give the elongated spermatozoon. This process is known as spermiogenesis and it involves the elongation of the head, production of a tail and midpiece and the removal of the vast majority of the remaining cytoplasm, which is absorbed into the Sertoli cells (Figure 30.2B). All of these processes occur within the seminiferous epithelium, in the spaces between the Sertoli cells. After each division, the germ cells move toward the lumen of the tubule, so that eventually the spermatids are embedded in the apical region of the Sertoli cells, from where they are extruded into the lumen. This cyclical process is completed in 64 days. In addition, there are waves of development occurring every 16 days, longitudinally along the tubule, so that at a given site there are more mature stages in front and less mature stages behind. This ensures a continual supply of spermatozoa leaving the tubules and entering the rete. At each stage, the germ cells need different agents for their maintenance and development. These factors are all produced by Sertoli cells.

The spermatozoa, having reached the lumen of the seminiferous tubules, pass into a common area (the rete), where all the tubules open out. From there they pass into the ductus epididymis. The epididymis is a tube of 5 m in length, again highly coiled. Passage of spermatozoa through the epididymis takes 8–14 days. Its structure can be divided into three parts: caput, corpus and cauda (head, body and tail). In the epididymis, fluid is reduced, motility gained and maturation advanced. The spermatozoa become progressively motile; this means they can move forward. This is the final stage of maturation of the spermatozoa. In addition to gaining motility, it is possible that other maturational processes occur in the epididymis. It is for this reason that, in men with a blockage in the vas deferens, it is the preferred site of aspiration of spermatozoa to be used for intracytoplasmic sperm injection. Round spermatids aspirated from the seminiferous tubule have, however, also been shown to be capable of fertilisation by this method.

The spermatozoa are mainly stored in the epididymis, but also in the ampulla of the vas deferens. The spermatozoa are stored in epididymal fluid but, at ejaculation, secretions from the accessory sex glands are added to form seminal fluid and the latter make up a large percentage of the total volume. These secretory glands are the seminal vesicles, the prostate and the bulbourethral gland.