GMH/IVH is a neurological disorder unique to preterm infants.1 Its incidence decreases as gestational age birth weight increase.2 Because of improvement in perinatal and neonatal care, the incidence of GMH/IVH has decreased over the past several years but to a lesser extent than the decline in neonatal mortality.3,4 About 3 decades ago, GMH/IVH was noted in 45% of those with birth weight of 1500 grams or less and in greater than 60% of those with birth weight of 750 grams or less.5 In the 1990s, the incidence of GMH/IVH remained around 40% among the extremely low-birth-weight survivors,6 decreasing to 22% between 2000 and 2002.7 The more severe hemorrhages, grades III and IV, were reported to occur in 12% to 17% of the extremely low-birth-weight infants3 and in as high as 24% of those with birth weight of 750 grams or less.2 These severe hemorrhages occur in 17% to 28% of those with gestational age 22 to 26 weeks and in 9% to 14% of those 27 to 32 weeks’ gestation.8 Also, as to gender predisposition, boys are reported more likely to sustain GMH/IVH and are at higher risk for neurological sequelae.9 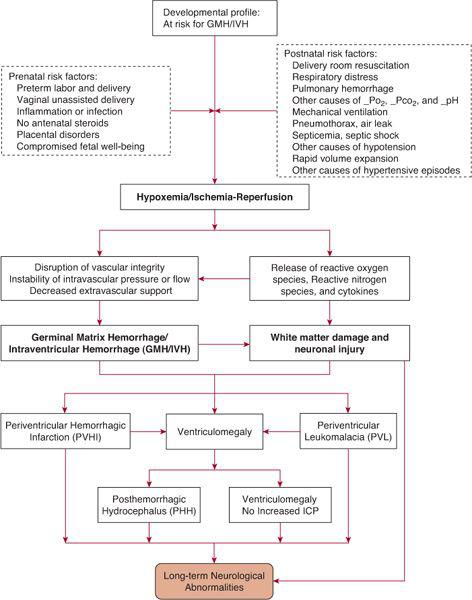 FIGURE 58-1. Schematic diagram of the pathogenesis of germinal matrix hemorrhage/intraventricular hemorrhage and its consequences.

The pathogenesis of GMH/IVH is complex1 and involves multiple risk factors and disorders that may cause biochemical, inflammatory, and hemodynamic alterations, predisposing to the development of hemorrhage. Further, the mechanisms for predisposition to hemorrhage, and the relationship among GMH/IVH and white matter and neuronal injury have recently been linked to generation of free radicals, reactive oxygen and nitrogen species, and genes-environment interactions.10,11 The origin of hemorrhage is the germinal matrix, a prominent structure in the preterm brain in the second and early third trimesters, which undergoes involution as gestation reaches term. The germinal matrix structure contains neuronal precursor cells prior to 20 weeks of gestation. As development progresses, the differentiating glioblasts give rise to oligodendroglial cells, which are important to myelination. The germinal matrix is supplied by a complex capillary network but is a low blood flow structure.12,13 The susceptibility of the thin-walled germinal matrix capillaries to rupture may be due to their large diameter, which offers lesser resistance to changes in intravascular pressure,14 and to endothelial cell tight junctions, which are still undergoing maturation of their specialized function through the third trimester.15 Rupture of the capillaries results when the endothelial wall loses integrity and or when there is imbalance of pressure between the intravascular lumen and the extravascular space.12 eTable 58.1

lists cerebrovascular factors and alterations in cerebral hemodynamics that may result from a variety of antenatal and postnatal conditions. The antenatal and postnatal conditions are those that are usually associated with hypoxemia, hypercapnea, acidosis, hypotension, and/or ischemia. As seen in the schematic diagram in Figure 58-1, a single factor or a combination of factors may disrupt the cerebral circulation leading to GMH/IVH and its complications.

GMH/IVH is usually detected in the first 4 to 5 days of life with approximately 40% to 50% occurring in the first day of life.16-18 Early-onset hemorrhage isolated in the germinal matrix may evolve to become more severe and extend into the ventricles within the first week of life.19 Small hemorrhages may be asymptomatic and may only be detected by routine cranial ultrasound. However, larger GMH/IVH may present with sudden clinical deterioration, especially when there is a significant blood loss. Other clinical manifestations include anemia or failure; seizures; tense, full, and/or bulging fontanels; split and wide sutures; apnea and bradycardia with desaturation episodes; poor perfusion; hypotension; severe metabolic acidosis; increase in oxygen requirement; and increase in ventilator support.

Imaging studies will establish the diagnosis of GM/IVH. The current state-of-the-art approach to diagnosis is the use of cranial ultrasonography. Findings on ultrasound have been interpreted with a high level of agreement among practitioners.20 The procedure can be performed at the bedside, thus avoiding the risks of transporting the infant for either computed tomography (CT) scan or magnetic resonance imaging (MRI) procedure. Table 58-1 shows the grading of GMH/IVH, based on Papile criteria from CT scanning,21 still employed by clinicians and researchers for cranial ultrasound findings. Others have added findings such as cystic periventricular leukomalacia to indicate associated white matter injury and measurements of the lateral ventricles to define mild to severe ventriculomegaly.22 Volpe1 also reported modifications to the grading of cranial ultrasound findings, taking into consideration the location of hemorrhage and the amount of blood detected in the ventricles. Examples of cranial ultrasound findings are shown in Figures 58-2A and 58-2B.

Events that may result from GMH/IVH are listed in Figure 58-1. Associated brain injury may be secondary to the destruction of germinal matrix structure, injury to periventricular white matter, and/or neuronal injury. Large echodensities noted on cranial ultrasound adjacent to the GMH/IVH are due to venous drainage obstruction, termed hemorrhagic periventricular hemorrhagic infarction.23 Periventricular hemorrhagic infarction may be unilateral or bilateral. The area of infarction evolves into tissue loss such that a large porencephalic cyst is noted on later follow-up cranial ultrasound.

In some instances, white matter injury results from ischemia, and damage is noted pathologically as softening or deterioration of the white matter; this is called periventricular leukomalacia (PVL). Early PVL may be noted as echodense lesions in the periventricular area with or without blood in the ventricles. A few weeks after an ischemic insult, the echodense areas become cystic, and these findings are referred to as cystic PVL. Cystic PVL noted on cranial ultrasound is not always associated with GMH/IVH (see Figure 58-3).

About 2 to 3 weeks after detection of GMH/IVH, some infants may present with increasing head circumference, separation of sutures, full and tense fontanels, and sun-setting appearance. A repeat cranial ultrasound in the presence of these manifestations of increased intracranial pressure will reveal prominence and enlargement of the cerebral ventricles (ventriculomegaly), and thus a diagnosis of posthemorrhagic hydrocephalus.24 Posthemorrhagic hydrocephalus results from disturbance in cerebrospinal fluid (CSF) dynamics because of the obstruction of the CSF pathway by blood clots, in the posterior fossa cisterns, aqueduct of Sylvius, or foramen of Monroe. Postinflammatory changes in the arachnoid villi may impair CSF absorption. Obstruction and delayed absorption of CSF leads to progressive increase in ventricular size.24 Among those with GM/IVH who survive for more than 14 days, 50% will develop ventricular dilation, which will progress in half of these infants.25 In 62% of those with progressive ventricular dilation, spontaneous arrest occurs, while the remaining 38% will require nonsurgical or surgical treatment.25 Surgical intervention to relieve the increase in intracranial pressure and ameliorate associated clinical manifestations, will be necessary for rapidly increasing head size, frequent apnea and bradycardia, and the need for increasing ventilatory support.

Ventriculomegaly may also occur without increased intracranial pressure (hydrocephalus ex-vacuo). This differs from posthemorrhagic hydrocephalus and may be a result of brain atrophy from periventricular white matter injury. It rarely requires surgical treatment. Preterm infants with GMH/IVH without obvious parenchymal involvement may have evidence of white matter injury detected by MRI diffusion-weighted imaging at term postmenstrual age; diffuse, excessive, high signal intensity is noted in the cerebral white matter on T2-weighted images.10,26

The treatment of GMH/IVH is primarily supportive. Management strategies include initiation of mechanical ventilation or increase in ventilatory support and/or administration of oxygen in order to maintain optimal levels of PaCO2 and PaO2, treatment of hypotension with slow volume expansion and administration of pressors if unresponsive to volume expansion, blood transfusion to correct anemia from blood loss, correction of metabolic acidosis, anticonvulsant therapy for seizures, and administration of fresh frozen plasma, platelets, and other products if there is associated coagulopathy. Progression or evolution of GMH/IVH is monitored by a repeat cranial ultrasound especially when needed for decision making and parental counseling in the face of rapid clinical deterioration.

During early posthemorrhagic hydrocephalus, interventions such as diuretics and intraventricular fibrinolytic therapy have been used.24 Investigation is ongoing to assess the combination use of ventricular drainage, irrigation, and fibrinolytic therapy. Ventriculomegaly with increased intracranial pressure may occasionally respond to serial lumbar punctures, repeated ventricular taps through a ventricular reservoir, or drainage of cerebrospinal fluid by ventriculostomy. Ventriculoperitoneal shunt is the definitive surgical treatment when there is continued progression of ventriculomegaly accompanied by increase in intracranial pressure. Shunt obstruction, malfunction, and infection can complicate shunt placement and long-term function.