On MRI, the lesion appears isointense to muscle during the proliferative phase and demonstrates fatty replacement during the involutional phase on T1-weighted sequences. It is mildly hyperintense to muscle on T2-weighted images. Fat saturated T1-weighted contrast-enhanced sequences demonstrate intense contrast enhancement with serpiginous flow voids in and adjacent to the mass.
Note should be made of associated abnormalities in the brain and chest in view of the known association of posterior fossa malformations, hemangiomas, arterial anomalies, coarctation of the aorta and cardiac defects, eye abnormalities, sternal malformations, and supraumbilical raphe (PHACES syndrome).
Differential diagnoses of hemangiomas include slow flow vascular malformations (venous and lymphatic malformations), arteriovenous malformations, plexiform neurofibroma, and sarcoma.

Teratomas are the commonest congenital head and neck tumors. Some cervicofacial teratomas are being increasingly diagnosed on antenatal US and/or MRI. These lesions present as large cervical masses can cause fatal airway compression at birth.
US demonstrates a predominantly solid or mixed cystic/solid structure.
Calcifications are virtually pathognomonic of teratoma but are seen in only half the cases and are better delineated by CT. CT demonstrates a heterogenous mass with areas of fat attenuation and calcification.
MRI signal intensities are variable and depend on the internal composition of the lesion. Presence of fat can be confirmed by using fat-saturated images (Fig. 1.2). 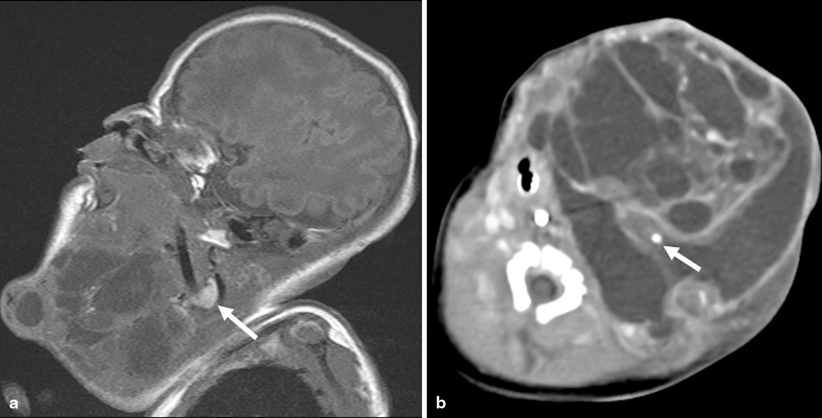 Teratoma. a Sagittal T1W image shows a large mixed solid and cystic cervicofacial mass in a newborn infant. Note the hyperintense structure in the neck is the right lobe of the thyroid (arrow). The mass involved the left lobe of the thyroid. b Axial CECT shows scattered calfications within the lesion (arrrow)
Differential diagnoses of cystic teratomas include lymphatic malformations and rarely infantile myofibromatosis. A useful imaging differentiating feature is that involvement of the thyroid gland by an infrahyoid congenital mass is almost pathognomonic of a teratoma (considered by some authors to be arising from the thyroid) [20].

Plexiform neurofibromas are benign peripheral nerve sheath tumors, virtually diagnostic of neurofibromatosis Type 1. Extracranial head and neck plexiform neurofibromas arise most commonly from the trigeminal nerve at the orbital apex [21]. These lesions present as multiple masses or as fusiform enlargement of the peripheral nerves produce a “bag-of-worms” appearance [22]. On MRI, these lesions are typically hyperintense on T2-weighted images and hypointense on T1-weighted images (Fig. 1.3). Deeper lesions are typically nodular and superficial lesions have a more diffuse, infiltrating appearance involving the subcutaneous tissues and the skin.

Imaging (either CT or MRI) usually confirms the diagnosis of JNA and in almost all cases, should help avoid biopsy. CT and MRI are utilized for presurgical planning of JNAs. MRI enables assessment of soft tissue extent and CT to determine the presence of skull base erosion.
Ideal imaging protocols for preoperative planning and staging include a maxillofacial CT with multiplanar reformats, maxillofacial MRI with T1-weighted fat-saturated contrast-enhanced sequences and catheter angiography of the external and internal carotid arteries (ECA and ICA, respectively) to identify feeding vessels. MR angiogram (MRA) may be performed to help evaluate the need for, and when needed, help plan catheter angiography for presurgical embolization.
CT usually reveals a diffusely enhancing soft tissue mass arising at the sphenopalatine foramen and extending from the posterior nasal cavity into the nasal cavity, nasopharynx, and pterygopalatine fossa (Fig. 1.4). Widening of the ipsilateral nasal cavity and pterygopalatine fossa and bowing of posterior wall of the maxillary sinus anteriorly is noted. 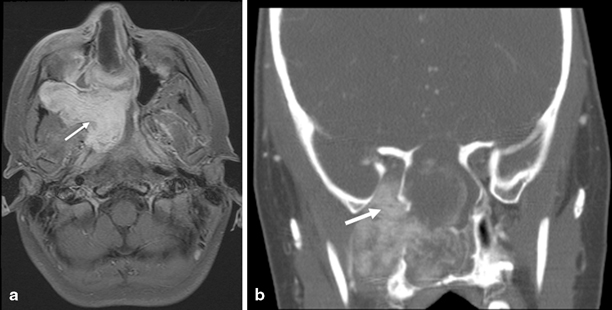 JNA. a Axial fat-suppressed post contrast T1W image shows a intensely enhancing nasopharyngeal mass, eroding the sphenoid and ethmoid sinuses, expanding the pteryogopalatine fossa, and extending through the pterygomaxillary fissure into the infratemporal fossa (arrow) in a 12-year-old male presenting with epistaxis. b Coronal reformat of contrast-enhanced CT shows extension of the mass into the foramen rotundum and inferior orbital fissure (arrow) and extensive osseus destruction
On MRI, a heterogeneous mass with intermediate signal is seen on T1- and T2-weighted sequences. Serpentine flow voids are typically seen within the tumor with intense enhancement post contrast administration. Coronal T1-weighted images are required to look for cavernous sinus, sphenoid sinus, and skull base extension.
Catheter angiography demonstrates a capillary blush fed by feeding vessels (usually ascending pharyngeal or internal maxillary arteries) from the ECA or occasionally, in the case of skull base or cavernous sinus extension, from the ICA.
Differential diagnoses include antrochoanal polyp, RMS, and hemangioma.

LCH is typically characterized on CT by an enhancing soft tissue mass associated with bony involvement, which classically involves “punched out” lytic lesions. However, bony lesions may also present with irregular sclerotic margins or fragments of bone associated with smaller or no appreciable soft tissue component.
On MRI, LCH lesions show ill-defined borders, which are iso- to hypointense on T1-weighted and iso- to hyperintense on T2-weighted sequences with homogenous enhancement. The demonstration of enhancing masses on MRI helps distinguish LCH occurring in the temporal bone from other erosive processes of the temporal bone [5].
Differential diagnoses include acquired cholesteatoma, cholesterol granuloma, acute mastoiditis, and RMS.

US may be used to assess superficial cervical lymph nodes. Sonographic features of malignancy include increased size, loss of the normal oval shape with a more round shape, and loss of the normal echogenic hilum [4, 5]. Doppler US may demonstrate displacement of vessels, subcapsular vessels or aberrant vessels, or avascular foci.
CECT is the imaging modality of choice in assessing the disease and extent of extranodal spread, particularly involvement of lungs. CECT should include the neck chest, abdomen, and pelvis for accurate staging and may be coregistered with PET scans. Oral contrast is administered prior to the scan to help evaluate abdominal disease burden optimally.
Variable enhancement of lymph nodes may be noted (Fig. 1.5). Lymph nodes measuring less than 1 cm in short axis diameter are usually considered normal by size criteria. Central hypodensity may indicate nodal necrosis. If there is lack of fat stranding and less intense enhancement, consider lymphoma instead of infectious lymphadenitis [5]. Burkitt’s lymphoma may be seen on CT as a soft tissue mass with bony involvement of the mandible and “floating teeth” [5].

HL. Coronal reformat of CECT shows large rounded cervical chain lymph nodes with peripheral enhancement (arrow)
MRI demonstrates enlarged, round nodes which are isointense to hypointense to muscle on T1-weighted sequences, mildly hyperintense on T2-weighted sequences, and with less avid enhancement than reactive lymph nodes following the administration of gadolinium.
FDG-PET has been shown to be superior to Gallium 67 scans in staging, evaluating tumor response to therapy and determining tumor relapse [23].

RMSs are typically bone-destroying and “bone-pushing” tumors. CT best depicts this osseous change. Both CT and MRI demonstrate a soft tissue mass with variable enhancement. RMS is iso- to hypointense to muscle on T1-weighted sequences and hyperintense to muscle on T2-weighted sequences with moderate-to-intense enhancement following contrast administration (Fig. 1.6) Fat-suppressed T1-weighted images are helpful for the detection of orbital masses and parameningeal tumors. MRI also helps delineate intracranial extension of parameningeal RMSs.
Only gold members can continue reading. Log In or Register to continue