On successfully completing this topic, you will be able to:

External cephalic version (ECV), the manipulative transabdominal conversion of the breech to cephalic presentation, has been practised since the time of Hippocrates and through the European Middle Ages to modern times, although without much supporting evidence. In the late 1970s and 1980s, the procedure fell into disrepute but subsequent trials and the decline in the choice of vaginal breech birth has led to its wide reintroduction. It has been an RCOG audit standard for some time to offer ECV to women with a diagnosed breech presentation at term.

ECV at term has been subjected to rigorous scientific appraisal in a number of RCTs. There is significant reduction in the risk of CS in women where there is an intention to undertake ECV (OR 0.52, 95% CI 0.4–0.7) with no increased risk to the baby.

The perceived reduction in success rates in primigravid women has led to an examination of ECV before term. A systematic review of three older studies involving 900 women shows no reduction in CS rate (RR 1.1 95% CI 0.78–1.54). The recent Early ECV 2 Trial showed an increase in cephalic presentation at birth but no reduction in CS rate.1 Furthermore, early ECV possibly increased the risk of premature birth.

ECV can be carried out in early labour (if the membranes are intact) with success but no randomised trials exist and studies are too small to assess safety.

ECV has been introduced successfully into practice in the UK. Although the success rate (conversion to cephalic presentation) found is less than that quoted in trials (e.g. over 80% in Africa), others have found similar success rates. Generalisation of these results in the UK would result in a significant reduction in the numbers of CS. With case selection, it is possible to achieve higher success rates and operators improve with experience. Among published US studies, an overall success rate of 65% was found.

Reversion to breech occurs after successful ECV, with between 3% and 7% being reported for term ECV. Rates of over 20% have been reported for preterm ECV.

Parity is the main factor that affects success with nulliparous success rates around one in three and multiparous success rates around two in three or greater. Amniotic fluid volume may affect success, although there is no consensus on whether there should be an absolute cut-off for attempting the procedure. Maternal weight and height affect success and fetal weight (both macrosomia and small for gestation) may be a factor. Even within the ‘term’ period, gestation may matter, and the degree of engagement of the fetal breech has an effect. Attempts to produce a predictive algorithm have not been helpful.

Tocolysis and anaesthesia have been advocated to improve success rates. A Cochrane review showed a reduction in ECV failures with beta-agonist tocolysis (RR 0.74 95% CI 0.64–0.87) and a reduction in CS rate (RR 0.85 95% CI 0.72–0.99).2 One further trial since this review confirms this efficacy. Others have used selective betamimetic treatment after failure of ECV without tocolysis, demonstrating reduction in CS rates with this approach (RR 0.33 95% CI 0.14–0.8). Sublingual nitroglycerin was not found to be effective in the systematic review and in one subsequent large study. A trial comparing betamimetic with nitroglycerine tocolysis showed better success rates with betamimetic. One trial of fetal acoustic stimulation has shown fewer failures, but this requires further study. Amnio-infusion has been advocated but there is no evidence of efficacy. Some groups have used epidural and spinal analgesia. A recent meta analysis concluded that the use of spinal or epidural with an anaesthetic dose increases the success rate of fetal version (RR 1.44).3

Various postural methods, such as knee–elbow, knee–chest, Indian and Zilgrie positions, have been advocated. Review of clinical trials shows no increase in the rate of cephalic births.

The technique of moxibustion involves the use of burning herbs at acupoint BL 67 beside the outer corner of the fifth toenail. Although an early trial suggested an increase in cephalic presentations, a subsequent larger and better-conducted study has shown no benefit.

Systematic reviews of safety have been carried out. Transient fetal heart rate abnormalities occur in 5.7%, with persisting abnormal cardiotocography (CTG) in approximately 1/300. Placental abruption was rare, occurring in 1/1000 patients. A detailed examination of perinatal deaths in series of ECV suggests a perinatal mortality of 1.6/1000. This is not different from the perinatal mortality of pregnancies between 37 and 40 weeks.

There is a growing body of evidence that the CS rate for women who have successful ECV is around twice that of cephalic-presenting pregnancies and that the vaginal operative delivery rate may also be increased. The data are sufficiently consistent that women undergoing ECV should be informed of this.

Most women would choose ECV to allow vaginal delivery. However, some surveys have suggested that a substantial minority of eligible women would decline ECV, opting for CS. In part, this may be a failure of education and uptake can be increased by well-constructed information packages.

There are no studies comparing different methods of performing ECV (Figure 35.1). Training is largely ‘hands-on’, although Burr et al. developed a model that has some promise.

1 Inform the woman fully of the risks, national and local success rates and about the procedure itself.

2 Perform a CTG, which should be normal.

4 It is useful to carry out an abdominal circumference measurement to exclude both small for gestation and macrosomia.

5 Written or informed and documented verbal consent should be obtained.

6 Although serious complications are rare, the practitioner should ensure that there is immediate access to an obstetric operating theatre.

7 Tocolysis, if preferred, should be given at this stage. Terbutaline 250 microgram should be given by subcutaneous injection. The woman should be warned of the adverse effects and there should be no contraindications to betamimetic drugs.

1 Lay the woman flat and either on her side, with the fetal back upwards, or tilted using a wedge. Some practitioners also tilt the bed, placing the woman partly head down.

2 Disengagement of the fetal breech can be achieved by a number of methods, depending at present on personal preference. Most practitioners use the palmar surfaces of the fingers of both hands to gradually pull up the breech (Figure 34.1). Others use a modification of Paulik’s grip to push up the breech. In some instances, an assistant may push the breech from below if a woman or circumstances demand a more aggressive attempt at ECV.

3 Some use talc or various oils. There is no evidence that the use of these influences success or comfort rates.

4 Once disengaged, the breech is slowly pulled or pushed upwards and laterally to allow fetal flexion. Some practitioners rely totally on this manoeuvre, allowing the fetus to perform a forward somersault in its own time while maintaining the breech free and to the side. Others use one hand to grasp the free breech and the other to gently flex the fetal head by pressure on the occiput or nape of the neck (Figure 34.2). The hands follow the baby as he or she rotates.

5 The procedure should not be lengthy and there should be constant feedback from the woman on how uncomfortable she is. The fetal heart can be either auscultated or observed by scan if more than 2–3 minutes are needed. A maximum of three attempts can be made if the woman permits. Usually, forward somersault is the best direction but a backward somersault approach can be considered, if a third attempt is to be undertaken. The fetal heart should be observed or auscultated between attempts. 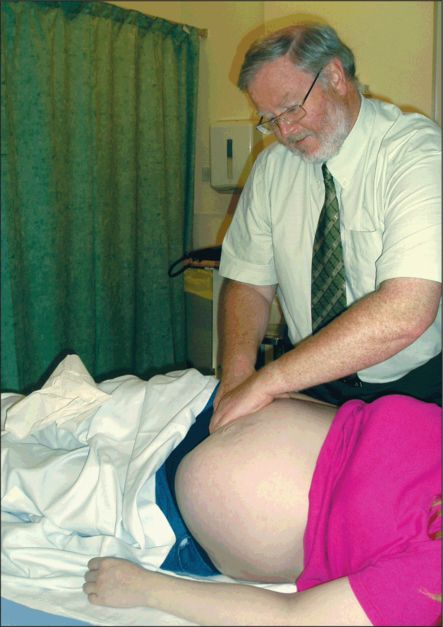 
Disimpaction of the fetal breech 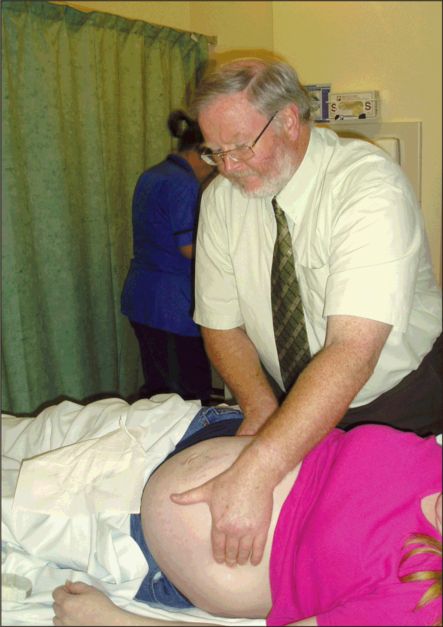 
Flexion of the fetal head

The use of CS as a primary choice of delivery mode for breech presentation has been increasing in the developed world and the publication of the Term Breech Trial demonstrated clear fetal and neonatal short-term advantages for elective CS.4 However, the two-year follow-up data showed no significant difference between the planned CS group and the trial of labour group for combined perinatal death and abnormal neurological outcomes. Furthermore, the children born in the trial of labour group reported fewer medical problems, although the significance of this is unclear. Dutch data have shown that the alteration in practice to a higher CS rate resulted in the predicted reduction in perinatal mortality, but at a cost of an increased maternal mortality rate and increased maternal morbidity in the short and long term.5,6 The recommendation in Holland now is that the preferred mode of delivery for breech presentation is vaginally, if appropriate. Data from the French PREMODA Study suggested that with careful case selection, careful management of labour and an experienced accoucheur, the neonatal outcomes are not significantly different in the two groups. Selection of cases included assessment of the type of breech, attitude of the fetal head and estimated fetal weight.

There are maternal disadvantages to a policy of routine CS for breech. Therefore, it is imperative that clinical skills of accoucheurs should be such that the option of vaginal breech delivery is available. Currently, in the UK setting, the vast majority of women are having an elective CS for breech, although this practice is now under question.

As a consequence of these concerns and of breech presentations being diagnosed for the first time in labour (which the term breech trial did not address), vaginal breech birth will still occur and skill in delivering the breech is needed.