Abdominal hysterectomy is one of the most frequently performed surgical procedures in the United States. The basis for this operation is an open abdomen (laparotomy), which provides adequate exposure for isolation of the uterus and adnexa from surrounding structures to allow cutting and securing of support structures that attach the uterus to the pelvic floor and sidewalls.

Strategic surrounding structures include the bladder anteriorly, the rectum posteriorly, and the ureters and great vessels laterally.

FIGURE 11–1 A. The myomatous uterus in situ, the Balfour self-retaining retractor is in place. A Richardson retractor is positioned between the bladder and the uterus. B. A 0 Vicryl stitch placed into the uterine fundus pulls the uterus posteriorly, exposing the vesicouterine peritoneum. A malleable retractor has been placed between the uterus and the sigmoid colon. 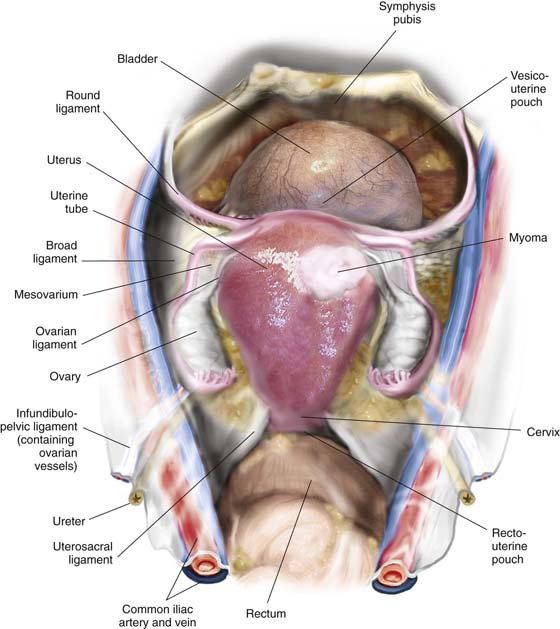 Thus, surgery is performed in a logical stepwise fashion.

2. The bladder flap is cut by grasping the peritoneum of the vesicouterine fold just below its reflection onto the uterus (Figs. 11–4 and 11–5A–D). Steps 1 and 2 are repeated on the opposite sites (Fig. 11–6).

3. With the use of a sponge forceps, the bladder is gently pushed inferiorly from the cervix. Care is taken to stay in the midline, pushing onto the cervix (Figs. 11–7A, B and 11–8). If the patient has had previous surgery (e.g., a cesarean section), the bladder should be separated from the uterus by sharp dissection.

4. The infundibulopelvic ligaments (ovarian arteries and veins) are isolated from the ureter and triply clamped (Fig. 11–9A–E). The ligament is divided between the first and second clamps. The vessels are doubly ligated with the tissue beneath the lowermost clamp simply ligated or suture-ligated. The tissue beneath the second (middle) clamp is suture-ligated with 0 Vicryl (Fig. 11–10). 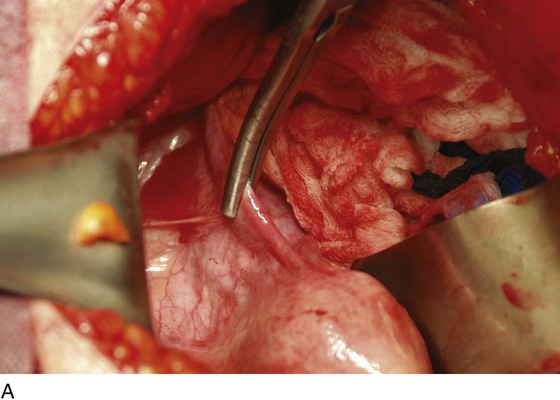 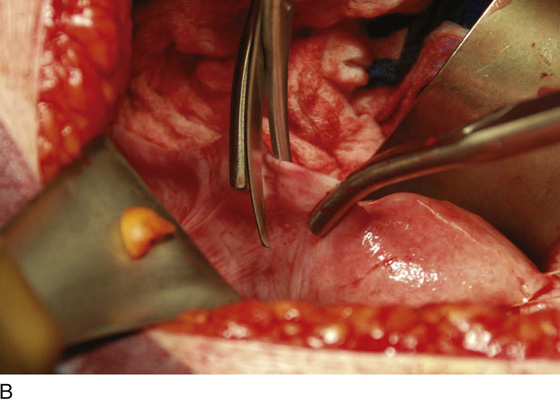 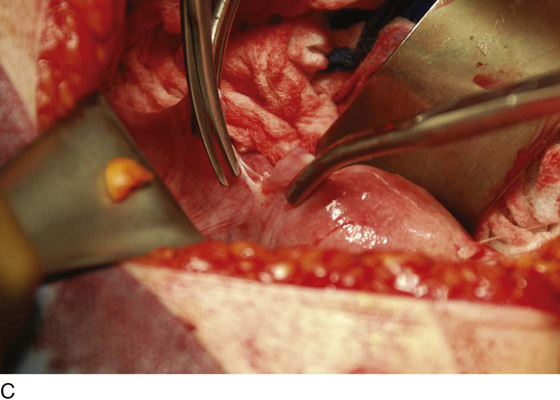 FIGURE 11–3 A. The round ligament is clamped with a Zeppelin clamp. B. A second clamp is placed on the round ligament at the point where it attaches to the uterus and the ligament is divided. C. The cut is extended into the upper portion on the anterior leaf of the broad ligament. 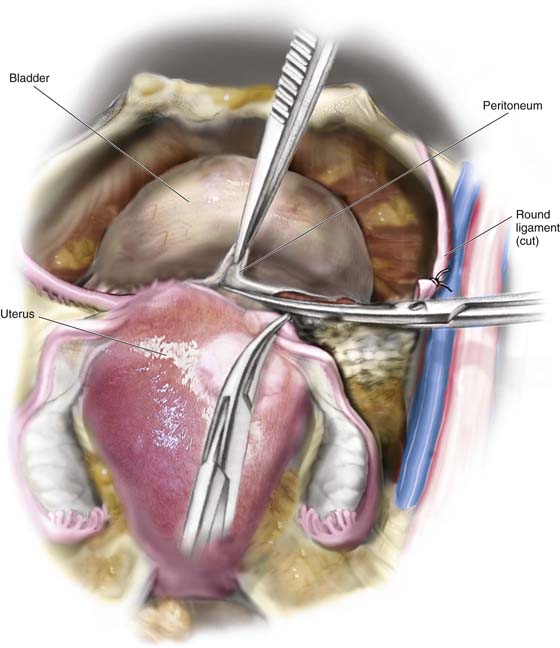 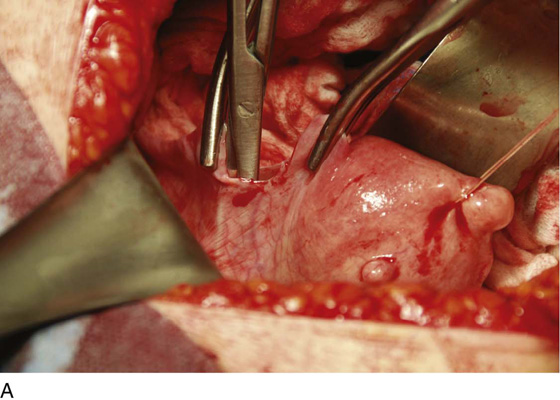 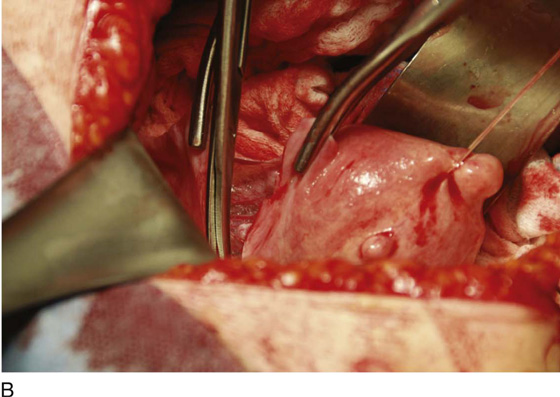 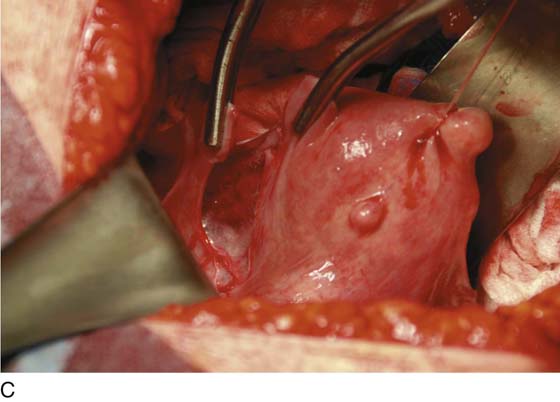 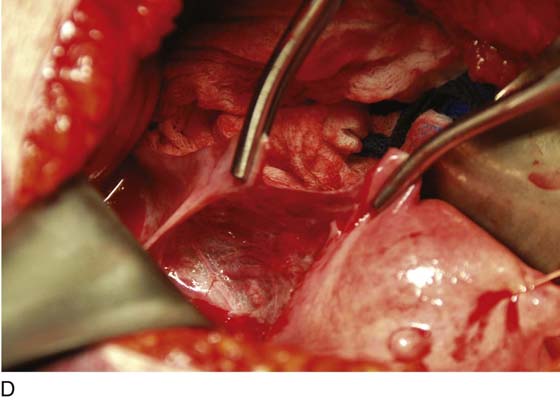 FIGURE 11–5 A. The scissor is slipped under the vesicouterine peritoneum within a bloodless space, in preparation for cutting the peritoneum. B. The bladder peritoneum is cut, thereby severing the attachment between the bladder and the uterus. C. The loose areolar tissue deep within the anterior leaf of the broad ligament is dissected. D. The pelvic ureter lies at the floor of the dissected broad ligament. 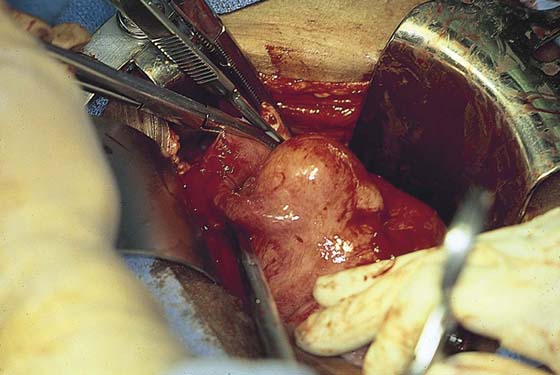 FIGURE 11–6 The left round ligament is divided similarly to the procedure performed on the right side. 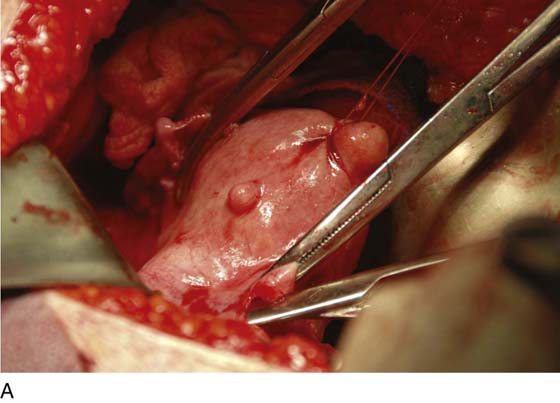 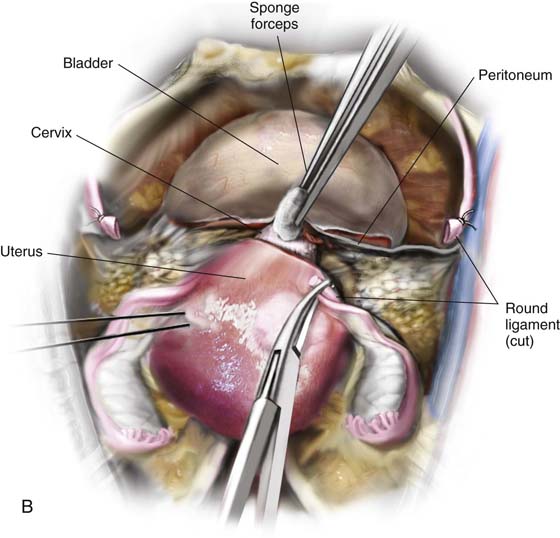 FIGURE 11–7 A. The left round ligament has been cut. The left side of the vesicouterine peritoneum is dissected with scissors and cut so as to join up with the severed peritoneum on the right side. B. The bladder is pushed inferiorly by applying pressure on the cervix and bladder with a sponge stick. The pressure should mainly be applied to the cervix. 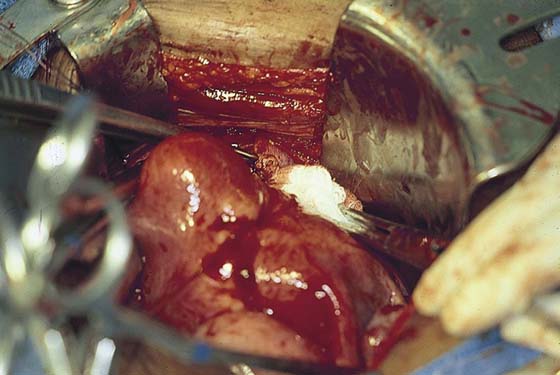 FIGURE 11–8 When sponge forceps are applied to the bladder, care must be taken to stay in the midline; straying to the right or left will invariably tear the surrounding vesical (vesicle) and uterine vessels. 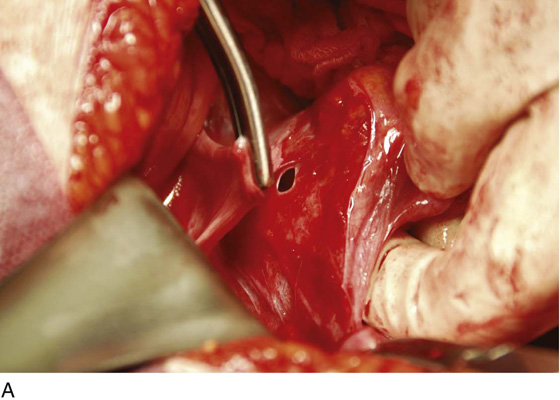 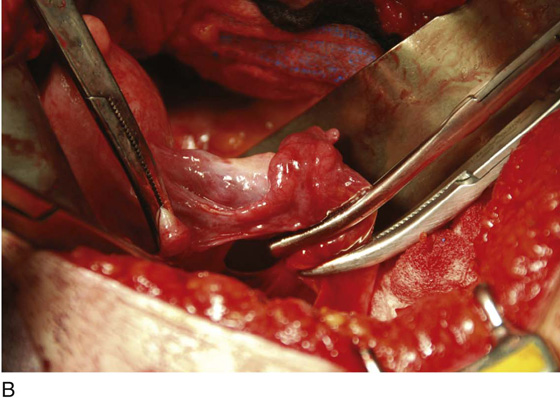 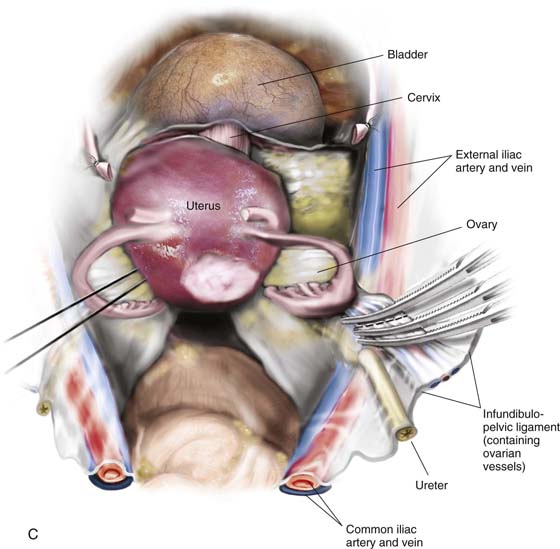 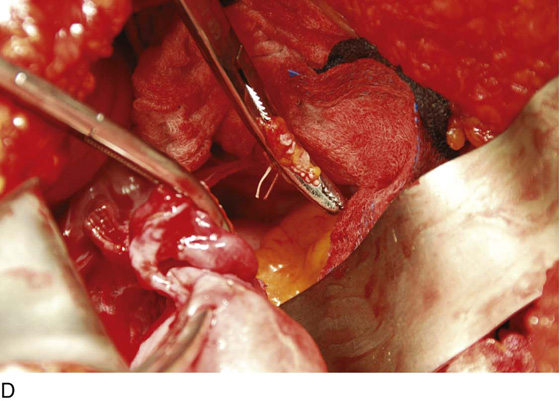 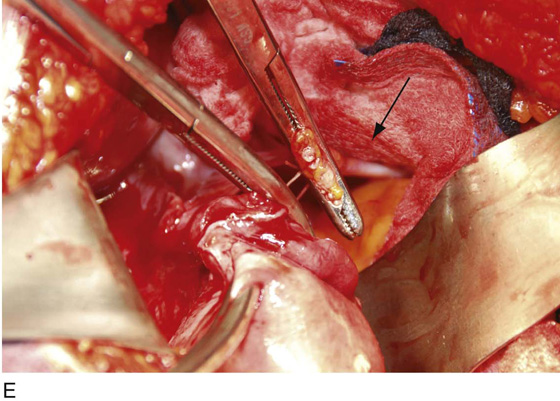 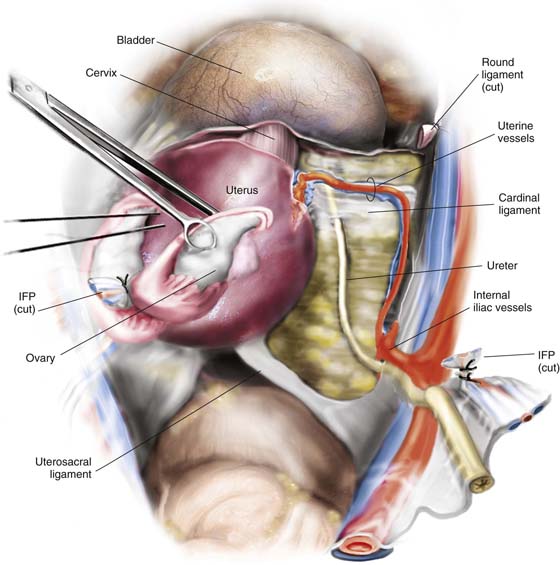 FIGURE 11–10 The lowest clamp on the infundibulopelvic ligament is tied with 0 Vicryl. The remaining clamp is removed after a suture is passed under the clamp and is tied fore and aft (around the tip and heel of the clamp). The ligament, thus doubly secured, is then divided. A similar procedure is performed on the right and left sides. The ureter is identified to the point where it is crossed over by the uterine vessels.