The definition of fetal death adopted by the Centers for Disease Control and Prevention National Center for Health Statistics is based on the definitions recommended by the World Health Organization (MacDorman, 2012). This definition is as follows:

Fetal death means death prior to complete expulsion or extraction from the mother of a product of human conception irrespective of the duration of pregnancy and which is not an induced termination of pregnancy. The death is indicated by the fact that after such expulsion or extraction, the fetus does not breathe or show any other evidence of life such as beating of the heart, pulsation of the umbilical cord, or definite movement of voluntary muscles. Heartbeats are to be distinguished from transient cardiac contractions; respirations are to be distinguished from fleeting respiratory efforts or gasps.

The overall fetal mortality rate at 20 weeks or more for the United States has steadily declined since 1985 from 7.8 to 6.1 per 1000 total births in 2006 (MacDorman, 2012). Before this, declines were even more impressive and likely due to elimination of deaths of anomalous fetuses at later gestational ages that were “prevented” by early pregnancy terminations (Fretts, 1992).

Fetal mortality is generally divided into three periods: early, or < 20 completed weeks; intermediate, 20–27 weeks; and late, 28 weeks or more. The fetal death rate after 28 weeks has declined since 1990, whereas deaths from 20 to 27 weeks are largely unchanged (Fig. 35-3). 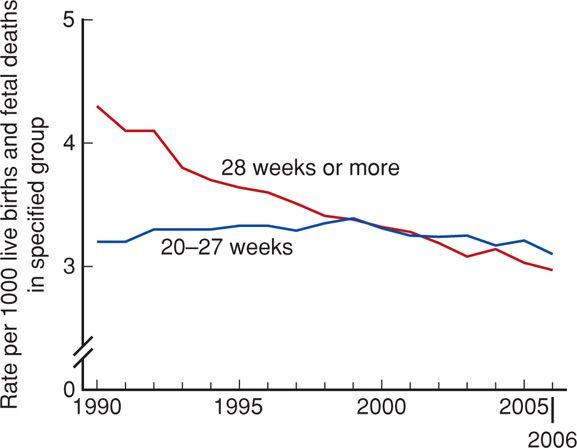 The Eunice Kennedy Shriver National Institute of Child Health and Human Development (NICHD) created the Stillbirth Collaborative Research Network to ascertain stillbirth causes in a racially and geographically diverse population in the United States. From this, the Stillbirth Collaborative Research Writing Group (2011b) ascertained stillbirths at 20 weeks or later between 2006 and 2008 in 59 tertiary care and community hospitals in five states. Standardized evaluations that included autopsy, placental histology, and testing of maternal or fetal blood/tissues—including fetal karyotyping—were performed in 500 women with 512 stillbirths. Of these, 83 percent were before labor and were considered antepartum stillbirths. Causes of stillbirth were divided into eight categories shown in Table 35-1. These categories were then classified as probable, possible, or unknown. As an example, diabetes was considered a probable cause if the fetus had diabetic embryopathy with lethal anomalies or the mother had diabetic ketoacidosis, but it was a possible cause if the mother had poor glycemic control and the fetus had abnormal growth. Overall, a probable or possible source was identified in 76 percent of cases.

This Network study of stillbirths is unprecedented in the United States for several reasons. It was a population-based cohort of stillbirths, all of which underwent systematic and thorough evaluation. Each cause of fetal death assigned is reasonably straightforward and comprehensible except for “placental abnormalities,” which includes “uteroplacental insufficiency” as well as a few other entities less clearly defined. This aside, the leading reasons for fetal death were obstetrical complications that primarily included abruption, multifetal gestation, and spontaneous labor or ruptured membranes before viability. The major contribution of this study was that systematic evaluation led to a likely cause in approximately three fourths of stillbirths. This rate is considerably higher then most analyses of stillbirth etiologies and serves to emphasize the importance of careful evaluations.

Factors that have been associated with an increased risk of antepartum stillbirth include advanced maternal age; African-American race; smoking; illicit drug use; maternal medical diseases—such as overt diabetes or chronic hypertension; assisted reproductive technology; nulliparity; obesity; and previous adverse pregnancy outcomes—such as prior preterm birth or growth-restricted newborn (Reddy, 2010; Varner, 2014). There have been two major recent studies in which the investigators assessed whether it was possible to identify stillbirth risk factors either before or shortly after confirmation of pregnancy. Reddy and colleagues (2010) analyzed data from the NICHD Consortium on Safe Labor. Briefly, the pregnancy outcomes of 206,969 women delivered between 2002 and 2008 at 19 hospitals in the United States were analyzed. Shown in Figure 35-4 is the distribution of stillbirths according to gestational age. Clearly, the tragedy of stillbirth occurs primarily in term pregnancies. Reddy and colleagues (2010) found individual risk factors that included race, parity, advanced maternal age, and obesity performed poorly as predictors of stillbirth at term. They concluded that these results did not support routine antenatal surveillance for any of these demographic risk factors. This is discussed further subsequently. 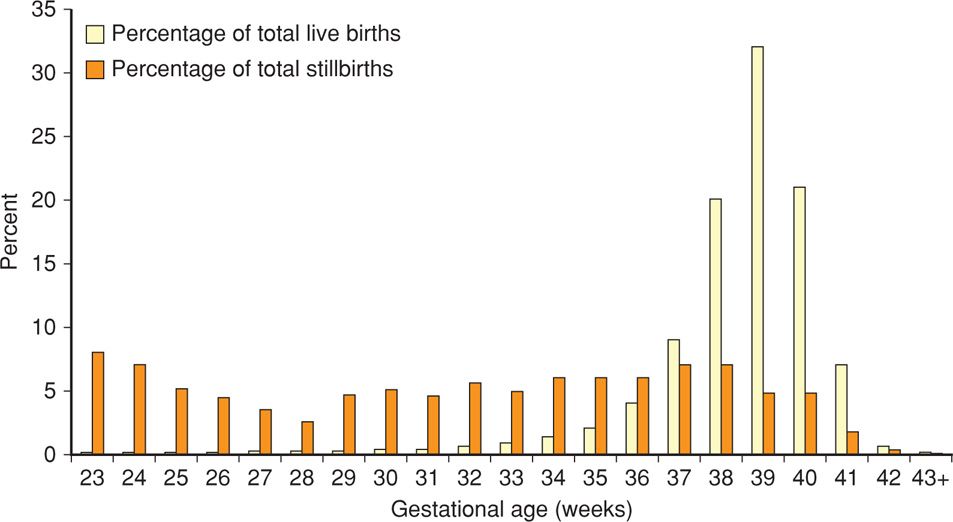 FIGURE 35-4 Distribution of livebirths and stillbirths in the National Institute of Child Health and Development Safe Labor Consortium according to gestational age. (From Reddy, 2010.)

The second recent analysis of stillbirth risk factors was included in the Stillbirth Collaborative Research Network study described earlier. Investigators studied stillbirth prediction based on risks identified in early pregnancy. They found that pregnancy factors known at the start of pregnancy accounted for a small proportion of stillbirth risk. Except for prior stillbirth or pregnancy loss such as preterm birth or fetal-growth restriction, other risks had limited predictive value (Stillbirth Collaborative Research Network Writing Group, 2011a). The importance of prior stillbirth as a risk for recurrence has been emphasized by Sharma and associates (2006). Specifically, stillbirth risk was fivefold higher in women with a prior stillbirth, and this recurrence risk was almost tripled in African-American women. Rasmussen (2009) analyzed 864,531 births in Norway between 1967 and 2005 and reported that prior preterm birth, fetal-growth restriction, preeclampsia, and placental abruption were strongly associated with subsequent stillbirth. Shown in Table 35-2 are estimates of stillbirth risk according to maternal factors including prior loss.