Skin. The skin is thin and contains hair follicles, sebaceous glands, and exocrine sweat glands. The mammary papilla, or nipple, contains sebaceous and exocrine sweat glands as well as abundant sensory nerve endings, but no hair follicles. The skin around the nipple constitutes the areola and is pigmented. Near its periphery there are elevations, Morgagni’s tubercles, formed by the openings of the ducts of Montgomery’s glands. These are large sebaceous glands of an intermediate type between sweat and mammary glands.

Parenchyma. The parenchyma is divided into 15–20 cone-shaped lobes (lobi glandulae mammariae), whose collecting ducts increase in diameter to form the subareolar lactiferous sinuses (ductus lactiferi colligentes). Between 5 and 10 major collecting milk ducts open at the nipple. Each lobe is itself made up of 20–40 lobules (lobuli glandulae mammariae) that consist of 10–100 alveoli or tubulosaccular secretory units (acini).

Stroma. The stroma of the breast contains strongly varying amounts of fat, connective tissue, blood vessels, nerves and lymphatics. Stromal tissue forms a mantle around the epithelial tissue of the lobes and along the peripheral ducts. Interlobular connective tissue surrounds the lobules and the central ducts. Fibrous bands called Cooper’s suspensory ligaments connect the fascial tissue enveloping the breast with the deep pectoral fascia covering the major pectoral and anterior serratus muscles, and support the breast.

Morphological aspects of the female breast undergo fundamental changes that depend upon age. Parenchymal changes occurring during pregnancy and the peripartum period will not be discussed here since they are not relevant for MR mammography. Breast enlargement and development of the mammary ducts begins a few years before the menarche. Development of the lobuli, however, does not begin until one to two years after the menarche and continues through the 35th year of life. At this time the physiological process of breast involution with regressive lobular changes begins. Figure 7.1 shows T1-weighted precontrast images as examples of the different development stages. Interindividual variability is very great, however. 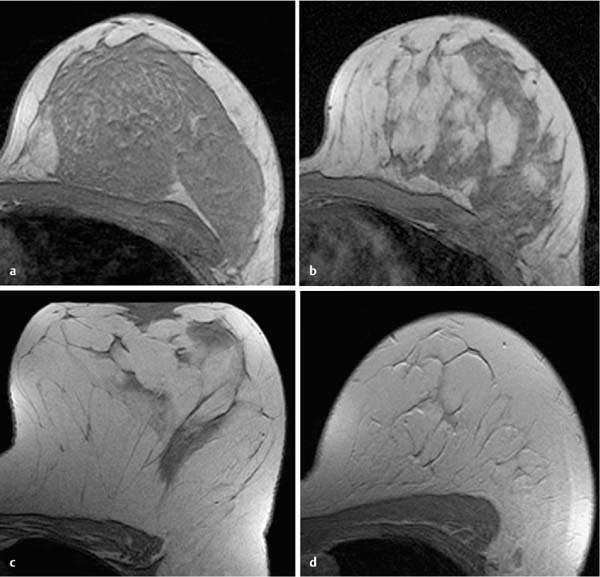 The following forms of asymmetry can be differentiated when comparing the breasts with each other:

Size asymmetry. When size asymmetry is present, inspection of the breasts reveals a visible difference in the volume of the right and left breast. Size asymmetries are frequent findings, the left breast more often being the larger of the two (Fig. 7.2). When no palpable mass is present, and mammography shows no characteristics suggestive of malignancy, such an asymmetry is of no clinical significance.

Parenchymal asymmetry. A parenchymal asymmetry is defined as being a clinically unremarkable difference in the proportion of parenchyma within the same-sized breasts (Fig. 7.3). This kind of asymmetry also has no clinical significance if there are no additional criteria suggesting malignancy (e.g., regional or diffuse enhancement).

Fig. 7.2a, b Size asymmetry. Greater volume of the left breast is visible on breast MRI. Because the left breast reaches the base of the breast surface coil, it is flattened ventrally. In contrast, the right breast hangs freely in the breast coil.

b Symmetric enhancement in the MIP.

Fig. 7.3a, b Parenchymal asymmetry.

a T1w precontrast image reveals that there is more parenchyma in the left breast than in the right breast.

b In spite of the parenchymal asymmetry, neither breast shows increased enhancement in the subtraction MIP.

a T1w precontrast image reveals a regional, nonadipose area in the lateral aspect of the left breast without a mirror-image area in the right breast.

b No increased enhancement is seen in this area after contrast administration (MIP). This is a reliable indication that a harmless focal asymmetry is present.

Fig. 7.5a, b Enhancement asymmetry.

b The subtraction MIP shows diffuse enhancement of most of the parenchyma in the right breast, and no enhancement in the left breast. The follow-up examination 6 months later showed unremarkable symmetrical enhancement.

a T1w precontrast image reveals a localized area of nonadipose tissue medial to the main body of breast parenchyma.

b In the subtraction image this area shows hypervascularization similar to that of the main body of breast parenchyma. Histological verification of normal breast tissue by large core biopsy.

Focal asymmetry. A focal asymmetry is characterized by a regional, nonadipose area of tissue that does not have a mirrorimage area in the contralateral breast (Fig. 7.4). This can be a normal finding. When other criteria suggestive of malignancy are present, however, this can also conform to a malignant lesion.

Enhancement asymmetry. An asymmetric, diffuse enhancement of parenchymal structures is designated an enhancement asymmetry (Fig. 7.5). Such findings may be physiological. Often, however, these have another underlying cause (e.g. after radiation therapy, inflammation, tumor), so that further diagnostic workup is usually indicated.

Physiological enhancement. The nipple has a higher physiological CM uptake than the surrounding skin and breast parenchyma. This increased enhancement is typically seen as a line at the ventral surface of the nipple (Fig. 7.7a) or around the circumference of the nipple (Fig. 7.7b), or as diffuse enhancement of the nipple–areolar complex (Fig. 7.7c). The corresponding signal intensity curve usually shows a rapid initial signal increase (> 100% over baseline values) and a persistent postinitial increase or postinitial plateau.

Atypical perimamillary enhancement. Atypical enhancement in the immediate retromamillary region can be suggestive of an intraductal process (papilloma, DCIS, inflammation) and should therefore be histologically verified or followed up (Fig. 7.8a,b). A focal enhancement in the areolar region can be indicative of an inflamed Montgomery gland (Fig. 7.8c). Such findings are usually associated with clinical changes and are therefore easy to assess.

a Line of enhancement at the ventral surface of the nipple.

b Enhancement of the nipple circumference.